Prime Minister Boris Johnson has been granted a request to have parliament suspended for a month. With the October 31 Brexit deadline fast approaching, the move leaves lawmakers with few options to block a no-deal. 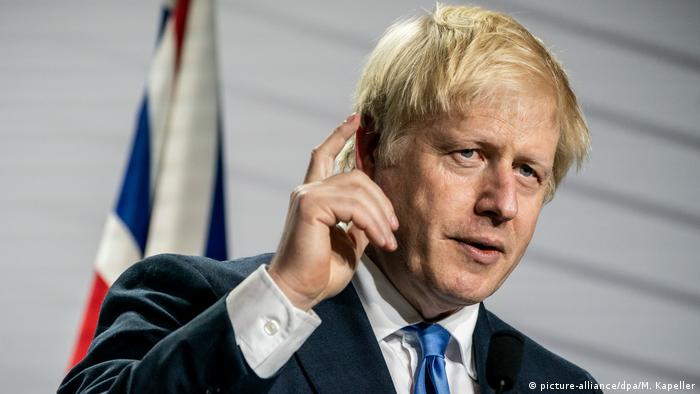 The British government will extend the amount of time that Parliament is not in session, Prime Minister Boris Johnson confirmed on Wednesday.

Queen Elizabeth II approved the prime minister's request to suspend parliament from mid-September and re-open it on October 14 — just over two weeks ahead of Britain's scheduled exit from the EU.

The move — known as prorogation of Parliament — prompted outrage from many MPs who see it as a bid by the government to stop lawmakers from blocking a no-deal Brexit or, more generally, play their part in a democratic process.

Johnson said the move was necessary to "get on with our domestic agenda" and introduce his new legislative program. Parliament will reconvene on October 14 when the queen will outline the government's agenda for the upcoming session.

Parliament was due to come back from its summer recess next week.

More than 1 million people have signed a petition calling for the British parliament not to be suspended from mid-September to mid-October.

"Parliament must not be prorogued or dissolved unless and until the Article 50 period has been sufficiently extended or the UK's intention to withdraw from the EU has been canceled," the petition reads.

Johnson denied that the move was designed to sideline lawmakers in the Brexit process, but rather that it is about moving forward his domestic agenda.

"There will be ample time on both sides of that crucial October 17 [European Union leaders'] summit, ample time in parliament for MPs to debate the EU, to debate Brexit and all the other issues, ample time," the prime minister said.

The EU refrained to comment on the request to suspend Parliament, but urged the British government to submit its proposed changes to the Brexit divorce deal.

"Our working assumption is that Brexit should occur on October 31 and that should happen with a deal," Commission spokeswoman Mina Andreeva said. "For that to happen, of course the earlier we see workable proposals, the better."

Johnson hopes to renegotiate a divorce agreement with the EU during the next leaders' summit in Brussels October 17 - 18. The EU has held firm that a withdrawal agreement negotiated with Johnson's predecessor Theresa May cannot be renegotiated.

If a new deal cannot be reached, the British prime minister has said the UK will leave the EU even without a deal.

Numerous MPs and British political figures slammed the move as a thinly-veiled attempt for the government to thwart opposition to its Brexit plans.

"This move represents a constitutional outrage. However it is dressed up, it is blindingly obvious that the purpose of prorogation now would be to stop Parliament debating Brexit and performing its duty in shaping a course for the country," John Bercow, the speaker of the House of Commons, told the BBC.

Jeremy Corbyn, the leader of the opposition Labour Party, issued a statement slamming the government's decision, saying: "I am appalled at the recklessness of Johnson's government, which talks about sovereignty and yet is seeking to suspend parliament to avoid scrutiny of its plans for a reckless no-deal Brexit."

Scotland First Minister Nicola Sturgeon said that unless Johnson can be stopped, "today will go down in history as a dark one indeed for UK democracy."

The announcement comes a day after lawmakers opposed to a no-deal Brexit met to discuss ways to force Johnson's government to delay Brexit.

Corbyn said Labour would introduce legislation next week to try and block the suspension. He added that a no-confidence vote would be called "at some point."

Dominic Grieve, a pro-European lawmaker in Johnson's Conservatives, told the BBC that if it is impossible to block parliament being suspended, "then I think it's going to be very difficult for people like myself to keep confidence in the government."

The UK could also be headed for a new general election, which would likely take place after October 31, when the UK is slated to leave the EU.

While the question of the Irish border has driven Brexiteers to distraction, they have been soothed by thoughts of a trade deal-rich future with countries like the US. They might be in for the rudest of awakenings. (27.08.2019)

US President Donald Trump praised Boris Johnson as the "right man" to deliver Brexit, while meeting the UK prime minister in France. Trump also pledged a trade deal with the UK, despite opposition in the US Congress. (25.08.2019)