UK opposition parties agree to work together against no-deal Brexit

Britain's opposition groups say they have agreed to cooperate in a bid to prevent a "no deal" Brexit. However, they were tight lipped on how they planned to do this, beyond saying they favored the parliamentary route. 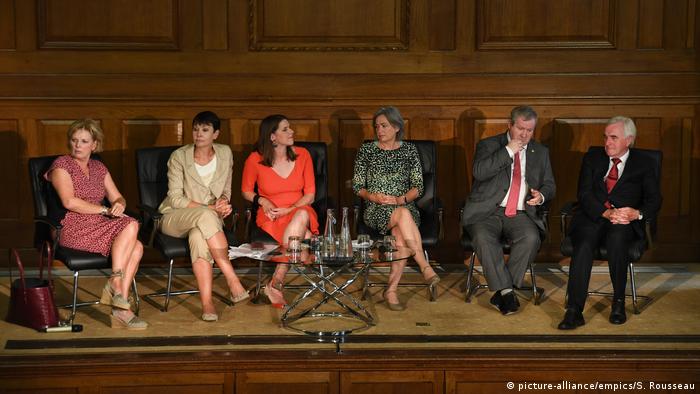 The leaders of several opposition groups in the UK met on Tuesday, saying they would work together to block a no-deal Brexit by passing legislation in Parliament. They did not say how or when they would make such an attempt. They also refused to rule out the prospect of holding a vote of no confidence in a bid to bring down Prime Minister Boris Johnson's government.

Until recently, other opposition leaders like Jo Swinson of the Liberal Democrats had been reluctant to cooperate with Labour Party leader Jeremy Corbyn, arguing that he did not command enough support in Parliament and insinuating that he was not particularly concerned about halting Brexit.

As it stands, the UK is set to leave the EU on October 31, with or without a deal. Johnson asserts that he would prefer a deal but also says he intends to leave on October 31 no matter what.

One possible tactic for the opposition might be to try to pass a law forcing Johnson to delay Britain's departure from the bloc to prevent a no-deal scenario — a similar tactic helped bring about March's delay of the original Brexit deadline.

Caroline Lucas, the UK Green Party's only MP, called "the legislative way forward ... the most secure way to extend Article 50, to get rid of that October 31 deadline," and to stop Johnson "careering towards" a no-deal.

The parties agreed that if their attempt to pass a law failed, they would consider forcing a government collapse in a no-confidence vote.

Time is short, however, and there's no consensus on what parliamentary measures — if any — would prove viable for the opposition. The focus of Tuesday's talks was said to be discussing what options remain open to them in Parliament. Corbyn's office later said that he had written to more than 100 Conservative and independent lawmakers who have opposed a no-deal Brexit in the past, sounding them out for possible support.

Showdown with the EU

EU Commission President Jean-Claude Juncker said on Tuesday evening that the EU would do everything it could to avoid a no-deal Brexit, saying such an outcome would only ever be the UK's decision and not the EU's.

Following a 20-minute phone call with the British PM, Juncker said he would look at any concrete proposals Boris Johnson had on the Northern Irish backstop but underlined that the EU's support for Ireland was steadfast.

Johnson had described his chances of securing a new deal with the bloc as "marginally" higher following G7 talks over the weekend. However, in the absence of a fresh agreement, Johnson has not ruled out suspending Parliament to allow a no-deal Brexit.

The opposition politicians also signed what they called the "Church House Declaration" during their talks on Tuesday, pledging to continue sitting in an alternative chamber opposite the House of Commons in protest, should Parliament be disbanded. 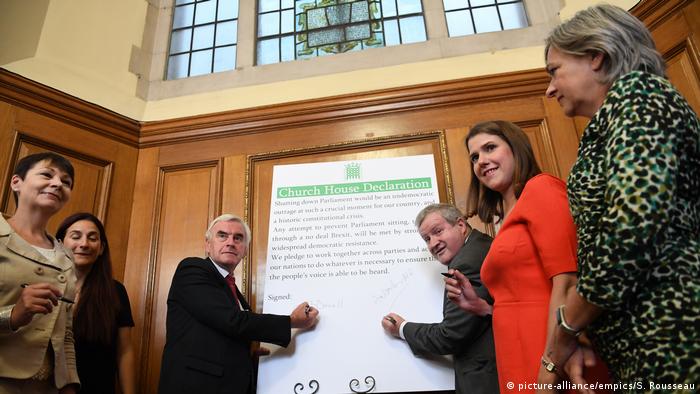 Perhaps tellingly, Corbyn left the later Church House photo op to his second-in-command at Labour, John McDonnell (3rd from left, signing the board)

British politicians remain deeply divided over how or even whether to leave the EU and the impasse has led to growing speculation that a general election may be imminent.

Meanwhile, Brexit Party leader Nigel Farage on Tuesday called on Johnson to explicitly support a no-deal exit, saying that his party would then consider a "non-aggression pact" with Johnson's Conservatives at any future election. Otherwise, Farage threatened, the Brexit Party would contest the next British election "in every seat."

"Given where we are, no deal is the best deal," Farage said. His recently formed group topped the European elections in May but has taken a big hit in the polls since Johnson became prime minister, slipping to fourth overall.

German Chancellor Angela Merkel's suggestion that Britain and the EU could find a solution to the Irish backstop in the next 30 days has "emboldened" British PM Boris Johnson. But should he really be feeling encouraged? (22.08.2019)

These days, the Northern Ireland peace process and free trade mean you'd hardly notice that there was a border separating two parts of the Emerald Isle. Brexit could make things complicated once again. (23.01.2019)

The road to Brexit has been a never-ending saga with so many twists and turns. Here's an overview of how it all started as the race to reach a last-minute deal between the UK and EU continues.

The British government passed the bill with a majority 340 to 263, despite vocal opposition from former prime ministers and members of the Conservative party. Critics have called the act a breach of international law.