German Chancellor Angela Merkel's suggestion that Britain and the EU could find a solution to the Irish backstop in the next 30 days has "emboldened" British PM Boris Johnson. But should he really be feeling encouraged? 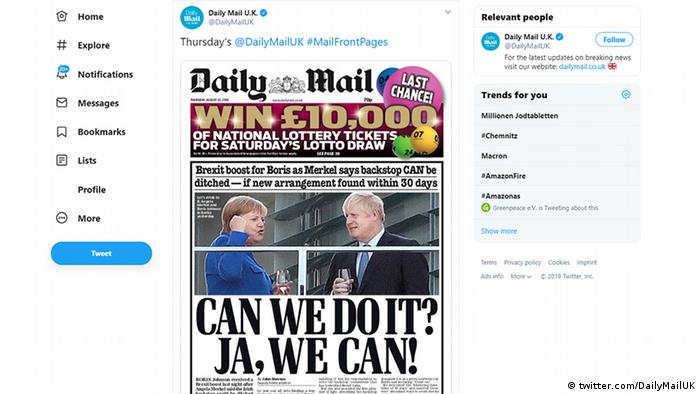 British media reported that Johnson received a major boost by Merkel's 30-day leeway to resolve the Irish backstop issue and that the British prime minister could use it to ramp up pressure on Brussels.

As set out in Brexit agreement, the Irish backstop requires both Britain and the European Union to keep an open border between Northern Ireland and the Republic of Ireland, which is and will remain a member of the European Union.

Johnson has called for the EU to scrap the backstop as it requires that Northern Ireland, part of the UK, adhere to rules set by the EU without having a say in the rules themselves.

Glimmer of hope for Britain?

Johnson, Merkel and other European leaders have all said they hope the UK will exit the European Union with an agreement in place, but they have added that they are all also prepared for the British to crash out on October 31 in a no-deal situation.

In her comments on Wednesday, Merkel described the Irish backstop as a plan to prevent a hard Irish border if the EU and UK could not reach a post-Brexit trade agreement.

"We were confident we could find a solution in two years, but we could also find one in the next 30 days, why not?" she said.

And it was the German leader's comment about a solution in 30 days that grabbed the most international attention.

French President Emmanuel Macron, who hosted Johnson in Paris on Thursday, also said that some movement on the Irish border issue could be possible, as he agreed with Merkel that "something clever" could be found in the next 30 days.

But Merkel, who was on a visit to the Netherlands on Thursday, clarified that she did not give any backstop deadline.

"I said that what you want to do in three or two years, you can do in 30 days — or rather, you would have to say: you can do it by October 31," Merkel said at a press conference, referring to the scheduled Brexit date.

"It's not about 30 days, but they were symbolic for the fact that you can do it in a short period of time," she explained.

Merkel said October 31 was more appropriate than the 30-day timeframe she mentioned earlier "because Great Britain said it would like to leave the European Union on October 31."

"Until then, we have to work on it — work on it if the will exists on both sides," she added.

Mujtaba Rahman, a Europe analyst for the Eurasia Group consultancy, said the talks offer should be interpreted as a minor concession designed to avoid the EU being seen as responsible for a no-deal Brexit.

"They're saying to Boris, you insist this can be done another way. You have 30 days to produce what you, the British, could not produce in two years," he wrote on Twitter.

In a bid to thwart a no-deal Brexit, the opposition Labour Party plans to call a no-confidence vote against Boris Johnson's government. With Corbyn as an interim leader, Labour said it would hold a new Brexit referendum. (15.08.2019)