The US aims to extend the START arms control treaty with Russia, limiting both countries to no more than 1,550 deployed nuclear warheads. A US diplomat told DW the move would help "ensure predictability and stability." 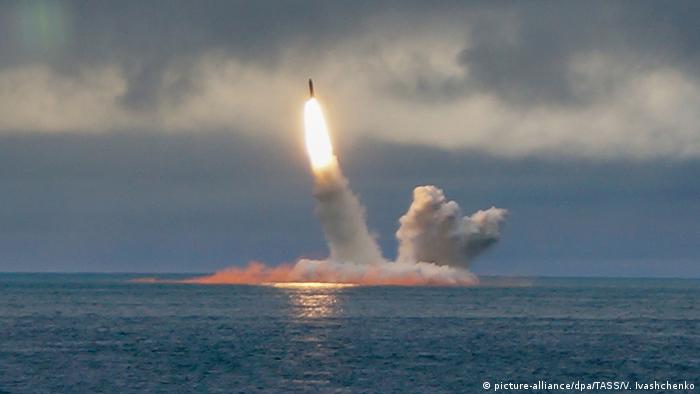 The Biden administration plans to seek a five-year extension to the New START arms control treaty with Russia, the White House announced on Thursday, only days before the crucial nuclear arms pact was set to expire.

"The President has long been clear that the New START treaty is in the national security interests of the United States. And this extension makes even more sense when the relationship with Russia is adversarial as it is at this time," White House press secretary Jen Psaki said in a briefing.

TheNew START arms control treaty was signed by then-US President Barack Obama and Russian President Dmitry Medvedev in 2010. It restricts the number of strategic nuclear warheads the pair can deploy to not more than 1,550. There is also a limit on the missiles and bombers that carry them.

The Kremlin said on Friday that it welcomed the Biden administration's proposal to extend the agreement and added that it was waiting to hear more details on a potential deal from Washington.

"We can only welcome political will to extend the document," Kremlin spokesman Dmitry Zeskov said. "But all will depend on the details of the proposal."

Rose Gottemoeller, a US diplomat and former NATO deputy secretary-general and New START negotiator, told DW the Biden administration's intention to agree with Moscow on a five-year extension of the last remaining US-Russia arms control treaty is in the United States' "best interest to ensure predictability and stability."

The agreement, one of the last restraints on Russia and the United States' nuclear forces, was set to expire on February 4.

"Compliance with the New START treaty has been very good," said Gottemoeller, but she warned that moving forward, "the Biden administration has a lot of concerns about what the Russians have been up to."

US vows critical eye towards Moscow

Refusing to give Russia a clean chit, press secretary Psaki said President Joe Biden had "tasked" the US intelligence community with conducting a full assessment of Russian interference in the 2020 election, the Solar Winds cyber breach, Russia's use of chemical weapons against Kremlin critic Alexei Navalny and the alleged bounties on US soldiers in Afghanistan.

She said Biden was committed to holding Russia "to account for its reckless and adversarial actions."

Russia has called for an extension of the nuclear pact for some time, but the Trump administration had rejected President Vladimir Putin's call to prolong the treaty for one year unconditionally, describing the notion as a "non-starter."

The Trump administration made a delayed bid to extend the treaty, but its conditions were rejected by Russia.

"There's no question in my mind that [the Biden administration] will have some serious and difficult discussions with with the Russians," Gottemoeller said.

"There will be not an easy bilateral relationship going forward. But traditionally — and this goes back to the Soviet Union times — we have been able to work on serious weapons of mass destruction issues, arms control issues, because nuclear weapons are an existential threat to us, to the Russians, in fact, to the globe."

"Extending the treaty's limitations on stockpiles of strategic nuclear weapons until 2026 allows time and space for our two nations to explore new verifiable arms control arrangements that could further reduce risks to Americans," he said.

Teri Schultz and Rosie Birchard contributed to this report from Brussels.