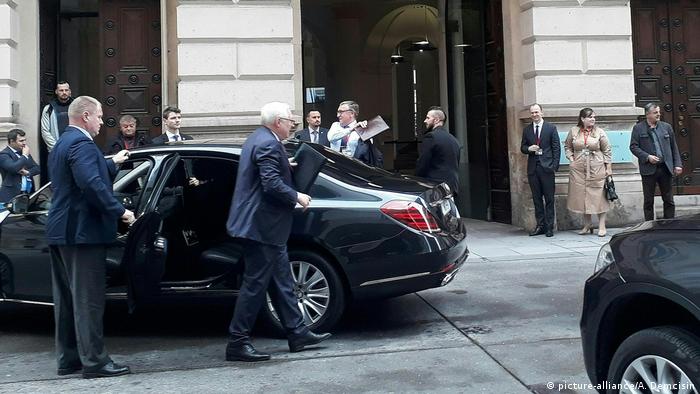 Senior Russian and US diplomats held arms control talks in Vienna on Monday as they race to replace a decade-old nuclear weapons deal that expires in eight months.

The New START agreement is the last remaining nuclear arms control deal between the new nations, but is due to expire in February.

The talks at the Palais Niederösterreich in the Austrian capital were expected to continue until Tuesday.

However, observers have little hope for success as US negotiators hope to replace the bilateral agreement with a trilateral deal that brings China into the fold, despite it having clearly signaled unwillingness.

US negotiators criticized China for not attending the meeting, with chief envoy Marshall Billingslea sharing a photo of an empty place prepared for China.

However, he said negotiations would continue with Russia.

The US and Russia hold an estimated 90% of the world's nuclear weapons, however China has been building up its stock in recent years.

Russian security expert Dmitry Suslov told state media ahead that the US was unlikely to extend the current agreement without China's participation.

New START limits each country to 800 nuclear missile launchers and 1,550 operational nuclear warheads. It can be extended for up to five years if both sides agree.

The Stockholm International Peace Research Institute estimates that Russia has 6,375 nuclear warheads, including those that are not deployed, and the United States has 5,800. It says China has 320 warheads.

US President Donald Trump has already withdrawn from several agreements with Russia, including deals on overflights and on intermediate-range nuclear forces.

Swedish research institute SIPRI has highlighted a worrying trend among nuclear powers: countries are modernizing their nuclear assets. Researchers have warned of a "new nuclear arms race" without an arms control regime. (15.06.2020)

China, France, Germany, Russia, the UK and Iran have met to voice support for the nuclear deal. The group criticised the US for its withdrawal from the agreement. (26.02.2020)