The United States and Russia have finally agreed on a new arms treaty that will significantly cut the number of deployed nuclear weapons and warheads. German foreign minister Guido Westerwelle welcomed the new deal. 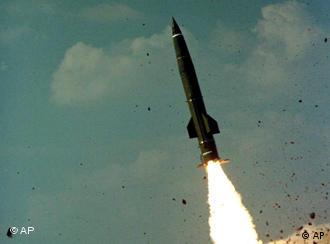 The new nuclear deal should replace one from the Cold War

US President Barack Obama finalized the details of a new US-Russian nuclear weapons agreement in a phone call with his Russian counterpart Dmitry Medvedev on Friday. In a statement Obama said that "today we have taken another step forward in leaving behind the legacy of the 20th century while building a more secure future for our children."

In a highly symbolic move, the new deal is to be signed in Prague on April 8, almost a year to the day since Obama gave a speech in the Czech Republic's capital outlining his vision for a world free of nuclear weapons. 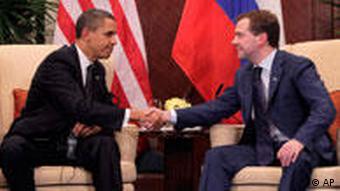 US-Russian relations have improved in the Obama administration

Medvedev was quoted as saying that the new treaty reflected the "balance" of interests between the two countries.

The new treaty will cut the number of deployed nuclear weapons by some 25 percent. Each side would be limited to 800 armed launchers, such as missiles, bombers or submarines. Furthermore the agreement envisages slashing the number of nuclear warheads within the next seven years to 1,550 from currently 2,200, which goes beyond a previous planned cut to 1,700.

Analysts are describing the landmark deal as a "significant foreign policy achievement" as it comes just ahead of a nuclear security summit in Washington next month and a review of the Nuclear Non-Proliferation Treaty in May.

For the best part of a year, talks had focused on a successor to the key 1991 Strategic Arms Reduction Treaty (START), which expired last December. START strictly limited the US and Russian nuclear arsenals and created a system of reciprocal inspections to verify compliance.

Trouble awaits in US Senate

However what may look good on paper still has a significant hurdle to overcome. Medvedev has been quoted as saying the new treaty must be ratified simultaneously by Russian and United States lawmakers.

"Either we ratify this document together, reflecting our views on strategic nuclear forces for the future, or this process may fail to take place," he said earlier this year. 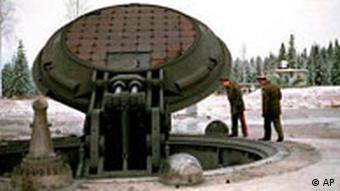 The number of warheads and verification procedures are key issues

While the Duma often follows the will of the Kremlin, the United States Senate is much less predictable.

The US Constitution requires a two-thirds majority vote in the Senate to ratify treaties. Some senators, mostly Republicans, have threatened to block the START successor if it contains too many concessions to Moscow.

The new treaty is widely seen as an effort to reset US-Russian relations after years of tension under the George W. Bush administration. This came about partly as the result of a planned missile shield program in Eastern Europe proposed by the Bush administration and staunchly opposed by Moscow.

Last September, the Obama administration decided to abandon Bush's program in favor of one it said was better-suited to the current situation. The new program found approval across Eastern Europe, including Russia.

Amid nuclear talks with US, Putin says Russia’s military may turn to offense if questions about the Americans’ missile defense plans aren’t answered. (29.12.2009)

The US is keen to sign a successor to the START treaty with Russia that would slash both nations' nuclear arsenals. Significant for Obama is not so much the treaty itself, but its global and domestic implications. (07.12.2009)

The Czech approval means US Vice President Joe Biden had a clean sweep on his eastern European tour, meant to gather support for a revised missile defense system. (23.10.2009)