Asian economies to shrink for first time in 60 years | Business | Economy and finance news from a German perspective | DW | 15.09.2020 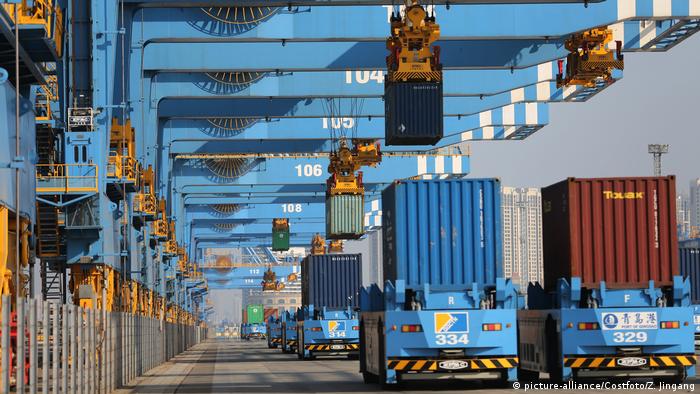 The economies in Asian countries from the Pacific to the Eurasian Steppe will contract this year for the first time in nearly six decades, according to a new report by the Asian Development Bank (ADB) released on September 15.

The Philippines-based bank expects the gross domestic product (GDP) to shrink for many countries in the region with an overall fall of 0.7% for the total region for 2020.

Because of the unforeseen and unprecedented developments this year, the bank saw the need to issue this updated version of their "Asian Development Outlook 2020" report. As late as June, they had predicted the year ending with 0.1% growth. By comparison, ADB expects the US to end the year down 5.3% and the eurozone down by 8%.

Not surprisingly the main culprit behind the downgrades is the coronavirus pandemic and the lockdown measures put into place to stop it. Besides hurting businesses, the economic downturn will unexpectedly send many people into poverty. Depending on the exact definition of poverty, it could mean an additional 78 million to 162 million people in the region living in poverty, "reversing poverty reduction achieved over the past 3-4 years," according to the report.

Nonetheless, the bank sees 2020 as an anomaly. After so many years of growth, they expect the region to get back on track in 2021 with 6.8% growth, though that is still below pre-pandemic forecasts and measured against weak numbers for this year.

From Taipei to Timor-Leste

For its prediction, the bank looked at its 46 member countries, which it calls "developing Asia," a list that includes nations like China, Mongolia, South Korea and Singapore to Papua New Guinea, Fiji and even Armenia, Azerbaijan and Tajikistan.

The ADB also assumed that a coronavirus vaccine is absolutely critical and will not be available until next year at the earliest. "Things will not return to the way things were prior to COVID unless a vaccine is rolled out and produced," Yasuyuki Sawada, the bank's chief economist, told DW in an interview. Until this happens, there is always the possibility for more lockdowns and travel restrictions.

Overall the report expects around three-fourths of these countries to post negative growth this year. China on the other hand is one of the 12 countries predicted to end up in the black, despite being at the epicenter of the COVID-19 outbreak. Here the bank expects to see the country end the year with 1.8% growth.

India though is not expected to do nearly as well. The country, which was hit later by the disease than many other nations, looks set to report an economic downturn of 9% this year before bouncing back next year. The worst-hit country will be the Maldives, which is forecast to shrink by over 20%, followed by Fiji with a drop of 19.8%.

Of the bank's 46 member nations, the report sees all but six in the black with positive growth for 2021.

It's not all bad news. The bank highlights low inflation because of low oil prices and "softening demand and subdued food prices." They also point to helpful government support packages announced to the end of August that had reached $3.6 trillion (€3.03 trillion), which amounts to about 15% of regional GDP and is "fairly evenly divided between direct income support and measures to shore up liquidity and credit." This government backing for businesses and individuals is seen by the bank as crucial to the region's recovery.

But Asia is not out of danger. Despite having recovered a lot of ground on trade, continued disputes between the US and China could put more pressure on China and have knock-on effects around the region. The bank's Yasuyuki Sawada also sees political tension and "friction over trade and technology" as one of the biggest hurdles for economic recovery.

Additionally, another big flare-up or two of COVID-19 could force the bank to have yet another revised look at the economies in the region. The Asian Development Bank itself warned that further outbreaks and lockdowns could have a disastrous impact and stop a regional recovery.

Right now, controlling and containing the pandemic is the No. 1 priority for all countries. "A prolonged pandemic is the primary downside risk to the outlook. Persistent or renewed outbreaks and a return to stringent containment could possibly derail the recovery and trigger financial turmoil," the report concluded. "Recovery depends on measures to address the health crisis and on continued policy support."