US set to block imports from China over forced labor

Washington has cited forced labor in western Xinjiang province as grounds to ban Chinese cotton and tomatoes. The measures would hit a wide array of industries and could have far-reaching consequences for US retailers. 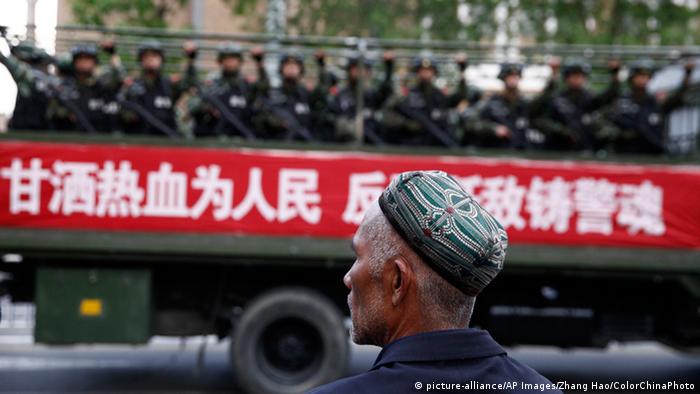 The United States has announced it will ban the import of cotton and tomatoes from China's western Xinjiang province, alleging they are the product of forced labor by minority Muslim Uighurs in detention camps throughout the region.

The ban will hit entire chains of goods, ranging from raw cotton to finished apparel to tomatoes in all their forms — pastes, powders and other products. Xinjiang leads Chinese production of both cotton and tomatoes.

US President Donald Trump is expected to announce the new measures and five other bans related to forced labor abuses at the White House on Tuesday. It's the latest move in a yearslong battle between the world's two biggest economies.

US claims evidence of rights abuses

US Customs and Border Protection (CBP), which is required by law to detain shipments of goods suspected to have been produced with forced labor, told Reuters news agency that it would use "Withhold Release Orders"  to do so.

"We have reasonable but not conclusive evidence that there is a risk of forced labor in supply chains related to cotton textiles and tomatoes coming out of Xinjiang," said Brenda Smith, CBP executive assistant commissioner. "We will continue to work our investigations to fill in those gaps."

CBP has alleged it has evidence of abuses "including debt bondage, unfree movement, isolation, intimidation and threats, withholding of wages, and abusive working and living conditions."

On Monday, US State Department spokeswoman Morgan Ortagus released a statement on Twitter calling for the Chinese Communist Party to end the practice of forced labor in Xinjiang.

The United Nations, too, has claimed it has credible evidence that as many as 1 million Uighur Muslims may be in detention camps across Xinjiang. China has vehemently denied the accusation that it is operating reeducation camps, referring to them instead as vocational training facilities designed to combat terrorism.

As China exports roughly 20% of the world's cotton supply — 80% of which comes from Xinjiang — the ban could also hit a broad spectrum of US retailers and producers. China exports only about 2% of the world's tomatoes but has been among the fastest-growing exporters in that sector since 2015.

In March, bipartisan bills that would crack down on imports from Xinjiang were put forward in both chambers of the US Congress. The move rattled industry groups who felt caught between the US and China. Some of the biggest American companies affected by such a ban would likely be Calvin Klein, Tommy Hilfiger, Nike and Patagonia.

Another US corporation's ties to the region have also landed it in hot water, albeit in another industry altogether. Hollywood giant Disney is once again the target of boycotts over its live action remake of the film Mulan, which was released last week. The calls came after viewers complained that the company had thanked government entities in the Xinjiang region in the film's closing credits. One of those entities was a public security office in Turpan, where a number of camps have been documented.