Delegates attending the Asia Pacific Economic Cooperation Forum in Lima, Peru, have demanded free trade policies continue. With the Trans-Pacific Partnership in trouble, other options are on the table. 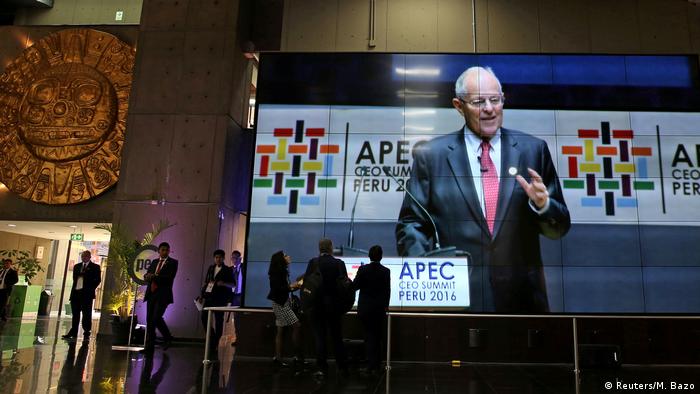 Following the United Kingdom's vote to leave the EU in June and the United States electing Donald Trump as president earlier in November, there is concern at the APEC meeting over the threat to free trade. Peruvian President Pablo Kuczynski said global trade stopped growing in the last two years and would worsen if nations closed off their economies. "It is fundamental that world trade grow again and that protectionism be defeated," said Kuczynski, a US-trained economist and former investment fund manager. "Anyone who wants to promote protectionism should read an economic history of the 1930's."

A delegate at ministerial meetings on Thursday and Friday said that APEC ministers were concerned over protectionism in the United States and that the mood was somber. US Trade Representative Michael Froman reassured leaders that US policy would not experience a dramatic change once Trump takes office in January. "Any new administration needs time to go through the transition process," said Froman.

Trump, while not at the APEC summit, looms large over meetings in Peru. The US president-elect said he does not approve of the Trans-Pacific Partnership (TPP). But TPP is stuck in the US Congress, despite current US President Barack Obama's approval. Obama's administration has stopped trying to push through with the deal, which was signed by 12 countries in the Americas and the Asia-Pacific region, but not by China.

China has an alternate plan, promoting the Regional Comprehensive Economic Partnership (RCEP), which excludes the Americas as it currently stands. The Obama administration said China would be happy to take over as the global free-trade promoter. Mexico, Japan, Australia, Malaysia, New Zealand and Singapore plan to move forward with TPP with or without the US, according to Mexican Economy Minister Ildefonso Guajardo. "We determined that our countries will press ahead with this agreement independently of what Washington decides," Guajardo told Mexican radio.

APEC finished a study for a regional free-trade area but will not discuss the study until the next annual APEC summit in Vietnam, said Peruvian Trade Minister Eduardo Ferreyros. TPP and RCEP were seen as potential paths toward an APC-wide agreement.

Obama, Russian President Vladimir Putin and Chinese President Xi Jinping are expected to arrive later during the conference. This will be Obama's final international summit before leaving office in January.

Russian Foreign Minister Sergey Lavrov has described his country’s airstrikes in Syria as 'limited.' The comments came during a meeting with US Secretary of State John Kerry. (18.11.2016)