Russian Foreign Minister Sergey Lavrov has described his country’s airstrikes in Syria as 'limited.' The comments came during a meeting with US Secretary of State John Kerry. 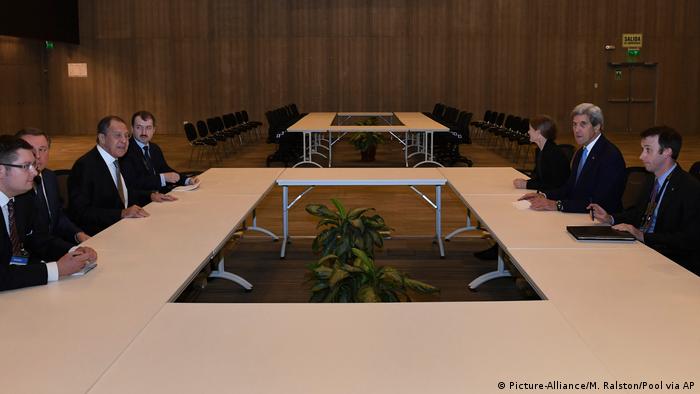 Meeting on the margins of the Asia-Pacific Economic Cooperation summit in Lima, Peru, Russian Foreign Minister Sergey Lavrov and US Secretary of State John Kerry discussed the conflicts in Aleppo, Ukraine, Libya and Yemen.

Kerry said he and the Russian diplomat discussed "all aspects" of the fighting in Aleppo, including the renewed bombing in the Syrian city this week. Lavrov denied that Russian military carried out airstrikes in rebel-held Aleppo this week. "Our air force and the Syrian airforce only work in the provinces of Idlib and Homs to prevent the ISIL who might be leaving Mosul from getting to Syria," said Lavrov on Thursday, referencing militants of the so-called "Islamic State" (IS) in Iraq.

Negotiations between the US and Russia failed to create a long-term cease-fire in Aleppo, a heavily embattled city in the ongoing Syrian civil war. Russia supports Syrian President Bashar Assad, while the US supports the opposition.

#AleppoIsBurning: Can a Twitter trend help end the war?

#AleppoIsBurning: Can a Twitter trend help end the Syrian war?

Some 20 civilians, including children, were killed across Syria as the government continued to make gains. Hundreds of thousands are cornered by the fighting between rival factions in Aleppo. (13.11.2016)