Independent medical associations said strikes appeared to be deliberately targeting medical facilities. To make matters worse, it appears food rations are on the verge of running out in besieged districts. 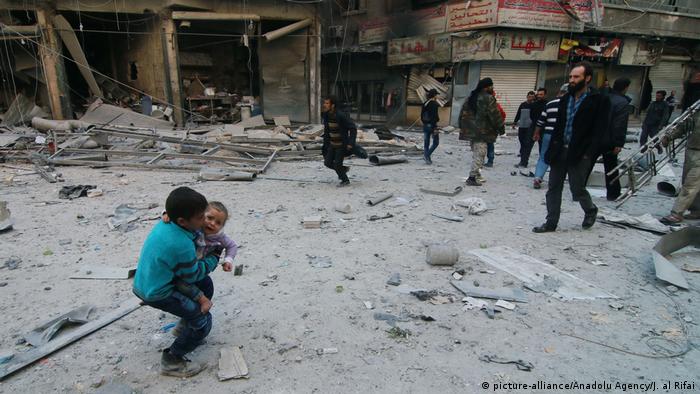 Syrian warplanes and artillery pounded the besieged districts of rebel-held Aleppo for the second day in a row on Wednesday, killing at least 18 people and raising the civilian death toll in the last two days to at least 32.

At least two hospitals, one blood bank and numerous residential buildings in the city's eastern districts were badly damaged during the onslaught. Residents say they counted approximately 50 artillery rounds and air strikes since the morning.

Tuesday's bombardment ended a nearly month-long lull in the Russian-backed government's assault on the rebel-held stronghold. The renewed fighting comes as Russia announced its anticipated push into Homs province, in central Syria.

The Syrian government bombardment appeared to be targeting medical facilities, according to Adham Sahloul, of the Syrian American Medical Society, which supports multiple hospitals in rebel-held parts of the country.

In besieged Aleppo, he said there are only five operational trauma centers in the eastern part of the city.

The Independent Doctors Association, which supports several medical facilities in Syria, said eastern Aleppo's central blood bank was bombed during Wednesday's attacks, as well as a children's hospital supported by the association.

"Me and my staff and all the patients are sitting in one room in the basement right now," a pediatrician who identified himself only as Dr. Hatem posted in a note that was cited by the association. "We will try to get out when the airstrikes leave our sky. Pray for us please."

Some 275,000 people are trapped by government forces in Aleppo's eastern sectors, according to the UN. A strict blockade - in place since August - prevents almost anyone from going in or out, while military forces continue to pound the region from the ground and the air.

The United Nations also warned that food rations inside the city's besieged districts are likely to run out any day.

Syrian President Bashar al-Assad told a Portuguese TV station channel that his forces were fighting to liberate civilians from "terrorists." But most of the rebels in Aleppo, numbering about 8,000, according to the UN, are Syrians who have been fighting to overthrow Assad.

Assad also said US President-elect Donald Trump could be a "natural ally," if he turned out to be "genuine" about his commitment to fighting terror in Syria.

Trump has said his priority in Syria would be defeating the so-called "Islamic State" (IS) militants, as opposed to regime change. He said the rebels could be "worse" than the sitting president, although he did not distinguish between "IS" jihadis and other fighters regarded by the West as more moderate.