APEC Summit: Meet me in Lima

So much for the end of free trade. The United States isn't calling the shots in Peru - China is. With the looming change of power in Washington, Beijing is stepping into the fold. 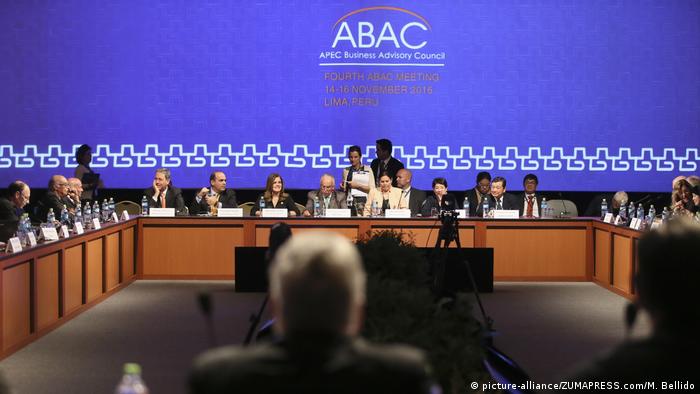 It is a G20 Summit with a new format: 21 heads of state are expected to attend the upcoming meeting of the Asia-Pacific Economic Cooperation (APEC) in the Peruvian capital, Lima, from November 17-20. Yet, one politician not in attendance will play the biggest role: Donald Trump.

"This meeting is taking place in a very strange atmosphere," says Klaus-Jürgen Gern, an expert on developing countries and commodities markets at the Kiel-based Institute for the World Economy (IfW). "Barack Obama is representing the US, he is a man who wanted to chart a very different course than the one that Trump is now promising."

The US president-elect's absence in Lima poses a critical question, one that has become the main topic of discussion at the summit: Is the free-trade zone of the 21 APEC member states even possible without the leadership of the US?

After Trump's repudiation of the Trans-Pacific Partnership (TPP), it seems like a very real concern. The proposed agreement for an Asia-Pacific free-trade zone that excludes China seems about to fail - for it can only go into effect if ratified by the US Congress.

Gern expects that China will attempt to take advantage of the leadership vacuum that has just been created by the US elections. "China is coming to Lima with an offer for a free-trade agreement among APEC states. That offer may well influence US policy," he says.

Rightly so: The Asia-Pacific Economic Cooperation is truly a global player. Its 21 member states account for 54 percent of the global economy and 50.3 percent of all global exports. Its combined population includes some 3 billion people, 40 percent of global population.

Peru's vice president, economics professor Mercedes Araoz, says that a free-trade agreement among APEC countries is "the crucial issue of the summit meeting."

Trade with China has already surpassed Peru's trade with the US. According to the Peruvian ministry of foreign trade, the country's trade volume with the US last year was roughly $12.8 billion (12 billion euros). Exchange with China was $16 billion in 2015.

The US remains South America's most important trading partner. However, the region has imported more goods from China than from the European Union since 2010, according to the Economic Commission for Latin America and the Caribbean (CEPAL). Overall, China is the third largest exporter to the region, behind the US and the EU.

The region's importance to China is reflected in Xi Jinping's schedule. The Chinese president will make state visits to Ecuador and Chile before attending the APEC Summit. IfW expert Klaus-Jürgen Gern believes it would be wise for Trump to travel to South America as well.

Gern says that Trump could study the effects of his professed plans of market isolationism by visiting Argentina: "For a long time there was an illusory boom there. Then the economy collapsed. If every country were to shun imports and raise tariffs," says Gern, "it would inevitably lead to a global economic collapse."

The EU Commission appears to be giving up hope to reach a trade agreement with the US, saying a relaunch of talks on the TTIP pact is unlikely with a president so fundamentally opposed to free trade. (11.11.2016)

Launching his final foreign trip as United States president, Barack Obama has said that a strong and unified Europe is "good" for the US. He also said NATO is "absolutely vital" for US security and prosperity. (15.11.2016)