Merkel defended democratic values in an interview following a contentious summer for her government. Interior Minister Horst Seehofer also said he doesn't expect a repeat of the crisis that nearly upended Berlin. 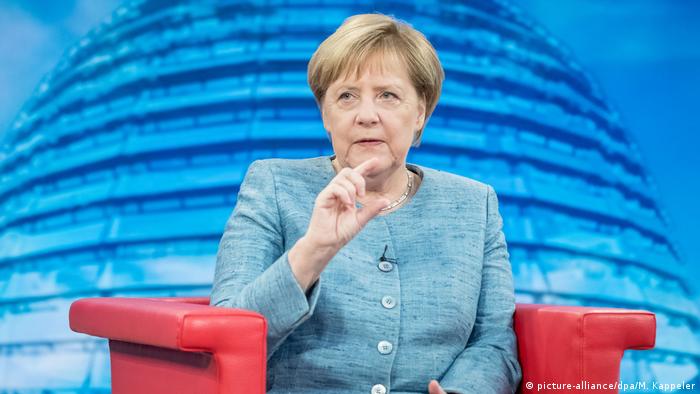 German Chancellor Angela Merkel emphasized the importance of press freedom, protections for minorities and independent courts in an interview with public broadcaster ARD on Sunday.

"Democracy is more than just somebody getting a majority," Merkel said. "Democracy is protection for minorities, press freedom, the right to demonstrate — democracy is independent courts."

If the independence of those institutions is no longer safeguarded, "then democracy would no longer be complete," she added.

Judges in Germany have recently been criticized by politicians, particularly over a state court ruling over the unlawful deportation of Sami A. — the alleged ex-bodyguard of Osama bin Laden. The Higher Administrative Court in the state of North Rhine-Westphalia ordered that Sami A. must be brought back from Tunisia to Germany and fined the authorities who authorized his deportation.

The issue of press freedom has also been in the spotlight in recent weeks after police held a TV crew at a far-right demonstration in the eastern city of Dresden.

After surviving a crisis over migration policy that almost dissolved Merkel's governing coalition earlier this summer, her cabinet is currently embroiled in a debate over pensions.

Merkel told ARD that a decision on pensions "will happen soon." However, the chancellor rejected a proposal from the center-left Social Democrats (SPD) who are pushing for a guarantee that pensions will remain stable until 2040.

She also rejected another SPD proposal that would give rejected asylum-seekers the chance to get long-term residency if they have found jobs and are integrating into German society. Merkel said the system would send the wrong signal that people who are applying for asylum could "switch lanes" after arriving in Germany.

"To send the signal, you can come, and there is basically no more differentiation, I don't think that's right," Merkel said.

The chancellor received the backing of Interior Minister Horst Seehofer, who appears to have established a fragile peace with the Merkel after threatening to leave his post earlier this summer.

On Sunday, Seehofer told public broadcaster ZDF that he doesn't expect there to be a repeat of the government's showdown over migration policy.

He said the government will now be making decisions "week by week on pensions, unemployment insurance, rising rents and a skilled workers immigration law."

Under pressure to maintain the CSU's absolute majority in state elections in Bavaria on October 14, Seehofer has been pushing for more right-wing policies, particularly when it comes to migration.