German Chancellor Angela Merkel has condemned Russia for seizing three Ukrainian ships in the Sea of Azov. But she failed to offer any military support to Ukraine or further economic sanctions against Russia.

David McAllister: "Russia has no right to do what it did"

Angela Merkel has reiterated Germany's support for Ukraine in the ongoing standoff between Russia and Ukraine over three ships seized on Sunday, though she did not threaten any further action against Russia, either in terms of military aid or sanctions.

Ukrainian President Petro Poroshenko took to Germany's Bild newspaper to ask Merkel to send navy ships to the Sea of Azov "to provide security," and accused Russia of wanting "nothing less than to occupy the sea."

Speaking at the third German-Ukrainian Economic Forum on Thursday, the German chancellor did not offer any direct answer to Poroshenko's request. Instead, the chancellor reaffirmed Germany's commitment to Ukraine, and put the blame for the current crisis squarely on Russian President Vladimir Putin.

She pointed out that Russia and Ukraine agreed a shipping treaty in 2003 that grants both countries full use of the Kerch Strait leading into the Sea of Azov, although both sides also have rights of inspection in the waters. A bridge that Russia built to the annexed Crimean Peninsula has impeded the free movement of ships, Merkel said.

"Since this bridge was opened in May this year, shipping conditions have worsened," the chancellor complained. "Of course I want the facts of what happened to be put on the table, that the sailors are set free, and that their confessions aren't forced out of them, as we saw on TV now." 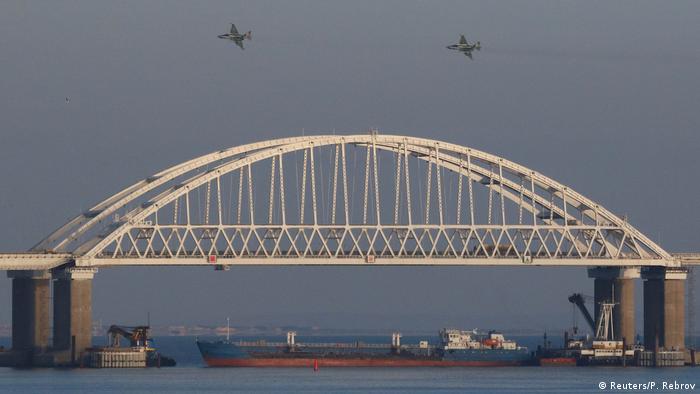 Shipping in the Kerch Strait has been hindered since the completion of the bridge between Russia and Crimea, Merkel said

Speaking before Merkel at the forum, Ukrainian Prime Minister Volodymyr Groysman condemned "Russian aggression." He said, "This is now the fifth year that Russia has disregarded international law."

Economic help, but no military support

Towards the end of the speech, Merkel did suggest only one way that Germany might apply extra pressure on Russia: by suggesting that European countries reduce the amount of gas they buy from Russia via its pipelines, Nordstream and Turkstream.

Nevertheless, Merkel expressed sympathy for Ukraine's dire situation: inevitable economic difficulties in the wake of the 2014 revolution, coupled with the annexation of Crimea by Russia and the subsequent military conflict with Russian-backed separatists in the country's eastern regions.

She also explained why Germany was maintaining its economic sanctions against Russia, even though plenty of German businesses wouldn't mind seeing them lifted. "Ladies and gentlemen, this is about principles," she told the forum. "We don't have these sanctions for their own sake; we have these sanctions to make clear that countries have the right to their own development, even if they're close to Russia – this is a principle of international law."

She added, "because it's often forgotten," that Ukraine had decided by referendum to become independent after the collapse of the Soviet Union, and Crimea had decided then to belong to Ukraine. She also pointed out that Ukraine had given up its Soviet-era nuclear weapons in exchange for territorial assurances from the international community, including Russia. "That's why we have a duty to stand up for what we promised," she said.

The Minsk Protocol of September 2014, agreed on by Russia, Ukraine, and separatists in Donetsk and Luhansk, secured a ceasefire, but it is regularly broken by both sides, and the conflict is still claiming the lives of an average of one soldier a day. "The Minsk agreement prevented constant further escalations in the last few years, but it did not get us any closer to a political solution, and it did not get Ukraine access to its actual borders," Merkel said.

For its part, Russia says Ukraine has not fulfilled its side of the Minsk bargain: ensuring local elections on autonomy in the separatist regions.

The US president has said he might pull out of talks set to take place on the sidelines of the G20 summit in Buenos Aires. Putin has dismissed recent confrontations with Ukraine as electioneering from Kyiv. (28.11.2018)

In a DW interview, Kurt Volker pledges that Washington will not strike a separate deal with Moscow over the heads of Europeans and Ukrainians - but says it is good that all agree the current situation must improve. (29.08.2017)

Angela Merkel has visited Ukraine's President Poroshenko, who is in the midst of an election campaign. There's disappointment in Kyiv at his failure to implement reforms, and hopes of EU-style democracy are fading. (02.11.2018)