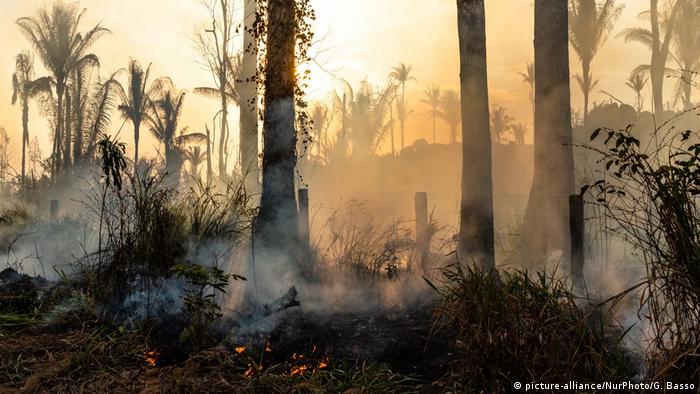 2020 is shaping up to be another destructive year for the Amazon rainforest in Brazil. Deforestation — a grim precursor to the fires used to clear the land for development — has increased significantly, according to observers. And many experts fear the region could see a repeat of the destructive wildfires of last August and September.

Satellite data released by Brazil's National Institute for Space Research (INPE) on August 1 showed more than 6,800 fires across the Amazon region in July, an increase of 28% compared with last year. And it's still early — August is generally considered to be the start of the fire season, which typically hits during drier months. More than 10,000 fires were recorded in the first 10 days of this month, up 17% from the same period last year, according to INPE.

Last year's deforestation toll on the world's biggest rainforest — 60% of which is in Brazil — was an estimated 10,000 square kilometers (3,800 square miles), roughly the size of Lebanon. That's the highest level since 2008, according to INPE. With increased deforestation comes a greater risk of wildfires, since many of the those that ravaged the rainforest last year spread from land being cleared for illegal mining, agriculture and cattle ranching.

Degradation below the canopy

President Jair Bolsonaro — who has repeatedly called for more of the Amazon region to be cleared for economic development — disputed the recent fire data in a speech to other South American leaders on August 11.

"Tropical rainforest doesn't catch fire. So this story that the Amazon is burning is a lie, and we have to fight it with real numbers," he told the meeting of the Leticia Pact, a group launched last year to protect the rainforest.

Read more: Amazon deforestation in Brazil hits worst level in over a decade

Bolsonaro challenged the leaders to fly over the rainforest from Boa Vista to Manaus, a distance of some 750 kilometers (460 miles), and see for themselves. "They won't find any spot of fire, nor a quarter of a hectare deforested," he said.

While these forests may still appear untouched when viewed from above, the green landscape seen from a plane or satellite can be deceptive. A typical wildfire burning through the understory — the vegetation growing beneath the forest's main canopy — of a virgin rainforest can wipe out small shrubs, plants and between 40 to 50% of all trees.

"A considerable part of the Amazon forest has been consecutively degraded, and it's invisible to our eyes," said Ane Alencar, director of science at the Amazon Environmental Research Institute (IPAM), a Brazilian non-governmental organization. "In fact, the quality of these forests has been degraded due to these forest fires." 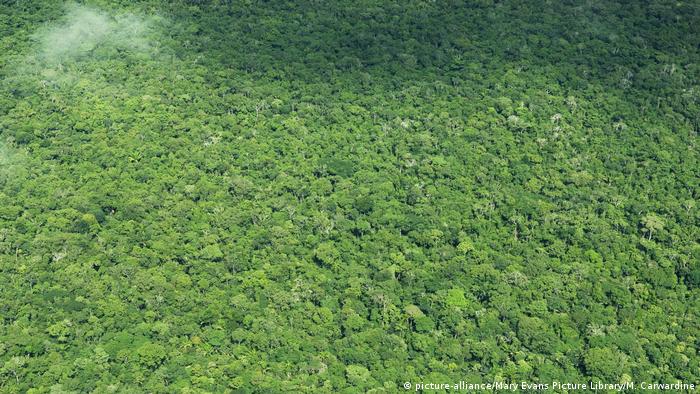 The Amazon may appear healthy from above... 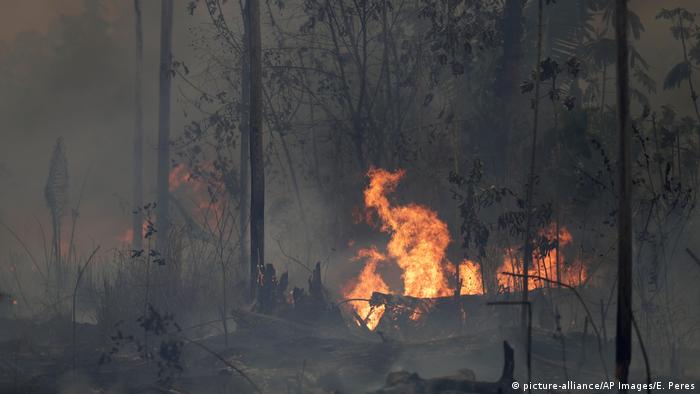 ...but down below, the understory may be in rough shape.

When much of the undergrowth and smaller trees are eliminated, it makes it difficult to maintain the moist understory microclimate that helps protect rainforests from fires. These microclimates are already suffering, with the average temperature in the Amazon basin having risen by at least 0.5 degrees Celsius (0.9 degrees Fahrenheit) since 1980, according to climate data from USAID. The dry season has become longer and severe droughts are now more frequent, with three reported since 2005.

The damage doesn't end with the initial blaze, either. Larger trees, which may be harmed in a fire but survive thanks to the moist environment, could finally succumb to the trauma years later. "Initially, it's the small trees which die because they are most vulnerable to the heat stress, but over time it's actually the larger trees which die and fall over, taking with them many other trees," said Jos Barlow, a British conservation science professor who has worked in Brazil since 1998.

"This opens up additional gaps in the canopy, allowing sunlight to reach the understory and further dry it out."

The recovery of mycorrhizal networks — underground systems of soil fungi that help trees to exchange nutrients and water — after a wildfire is still unclear and a subject of research, though it's known that the uppermost layer of very fine roots also suffers in the initial blaze. Some studies, including a 2017 article in Fire Ecology, have suggested that the "resiliency of soil fungi likely contributes to the overall rapid ecosystem recovery following fire." For forest ecosystems, however, rapid can still mean several decades, according to a 2019 report in the journal Science Advances — at the earliest.

Another danger, said Barlow, is that more and more fires are reigniting areas already damaged by fire, particularly along the edges of the rainforest near new roads, clear-cut fields and pastures, both legal and illegal. This could permanently change the landscape.

"If you have recurrent fires of two or three burns, then you move into an alternative ecosystem where you have almost no large [trees] at all, dominated by scrubby species and bamboo and grasses," said Barlow.

Paulo Massoca, a Brazilian researcher and doctoral candidate at Indiana University Bloomington studying rainforest regrowth, said recurrent fires act as a sort of "filter," gradually eliminating plants that are not adapted to frequent fires and selecting the most resistant species, leaving "a fraction of the whole pool of plants in the region."

"After repeated burnings, soils get impoverished, plants grow slower, and vines/lianas and other non-woody plants, in addition to trees, settle in the area," he told DW, adding that this wide-ranging change in the ecosystem "slows and hinders the capacity of secondary forests damaged by repeated fire events to grow back and accumulate carbon."

It doesn't help that the Amazon soil, already poor, loses even more valuable nutrients after a fire. In a rainforest, the nutrients provided by dead organic matter are quickly reabsorbed by living plant life, leaving little on the ground.

"Burnings both kill the plants that sustain the topsoil and eliminate the topsoil that supports the plants," said Massoca. "Fires immediately release the nutrients and carbon stored in the topsoil, which are either washed out after the first rain or released to the atmosphere."

Those suspended soot particles in the vast clouds of smoke then billow up over healthy forests, potentially affecting cloud formation and rainfall patterns, according to Divino Vicente Silverio, a biologist at the Amazon Rural Federal University in Belem, northern Brazil.

In an August 2019 interview with Nature magazine, he said this atmospheric aerosol burden could lead to changes in how forests cycle water, creating drier conditions and disrupting weather patterns in the Amazon and even farther afield.

'There are no natural fires in the Amazon'

Nearly all the fires in the Amazon can be linked to human activity. Trees cleared to make way for economic development are cut down and left to dry and then set alight — a technique known as slash and burn. Additional fires are set to eliminate weeds from existing pastures and clear out old agricultural areas. And, as happened in 2019, those fires can spread to surrounding forests.

"There are no natural fires in the Amazon," said Alencar of IPAM. "Even if it's very, very dry, we need to have somebody using the match." 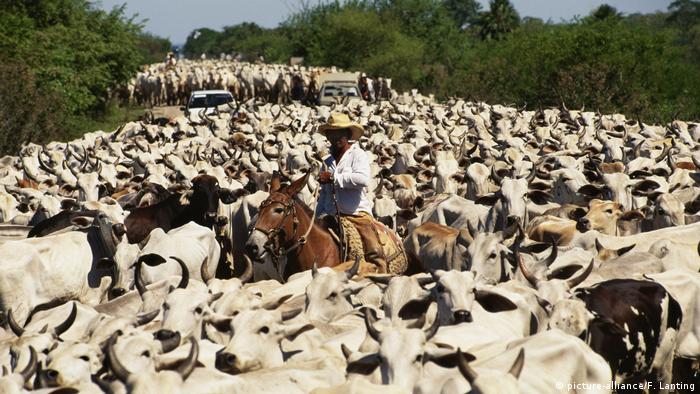 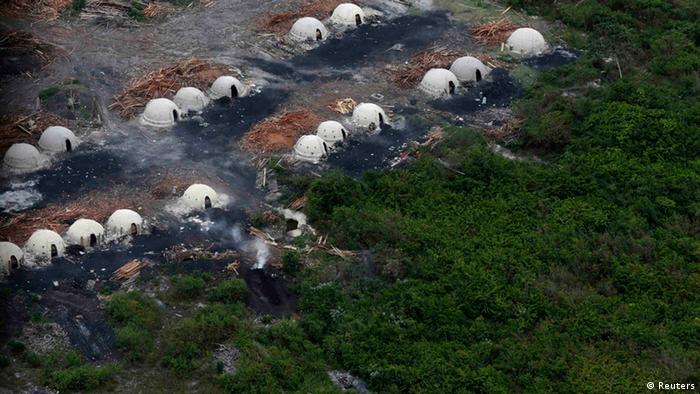 Illegal logging, mining and other industries are constantly eating away at the forest edges

Faced with criticism over the government response to the 2019 fires, President Bolsonaro has banned agricultural burning in the Amazon forest and Pantanal wetlands until November, the end of the dry season, and deployed troops to prevent illegal deforestation.

In his speech at the meeting of the Leticia Pact last week he said the government efforts had been effective, pointing out that forest clearances had dropped in July by more than 25% when compared with July 2019, the first decline in 15 months.

"We are making big, enormous efforts to fight fires and deforestation, but even so, we are criticized," he said.

Experts, however, have accused Bolsonaro of cherry-picking the data. INPE says deforestation increased by 25% year-on-year in the first half of the year, and that at least 3,000 square kilometers (1,200 square miles) had been cut down by June. Alencar said if the current rate continues, 2020 would be Brazil's worst year for deforestation in more than a decade.

In states with historically high deforestation rates — Mato Grosso, Para and Rondonia — the number of fires detected so far in 2020 is already higher than in the same period in 2019. Alencar said the increase so early in the season shows that the government response has been ineffective — and she believes it's already too late.

"For this fire season, it seems that we lost the battle against deforestation," she told DW. "We had two days, July 30 and August 1 … with more than 1,000 hot pixels, which are a measurement of fire activity in the region. And those were very high for that period."

Added to that are NASA observations that show a potentially active Atlantic hurricane season, like 2005 and 2010, which contributed to major drought in the southwestern Amazon as storms sucked moisture from the forest.

"They are predicting that it's likely to have the same pattern happening this year, which is going to be catastrophic if it's true," said Alencar.

With rising deforestation rates in the Amazon and 80% of logging linked to cattle ranching, some in Brazil are trying to boost sustainable livestock farming practices.

The Amazon rainforest is on fire and it's all Bolsonaro's fault. The world is outraged, but that's not going far enough. The global community will have to pay up to save this vital ecosystem, says DW's Vanessa Fischer.