Amazon deforestation in Brazil hits worst level in over a decade

Deforestation in the Amazon rose by almost 30%, the latest Brazilian government figures show. Concerns over the fate of the Amazon have heightened since right-wing President Jair Bolsonaro took office this year. 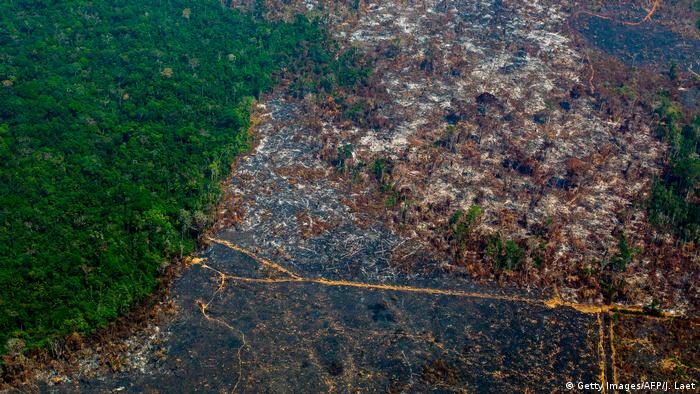 The rate of deforestation in the Amazon rainforest in Brazil rose to its highest level in more than a decade this year, according to government data published on Monday.

The figures represent a 29.5% increase compared to last year, and the highest level since 2008.

Environment Minister Ricardo Salles said new strategies were needed to combat illegal logging, mining and land-grabbing, which he said were to blame for the rise in deforestation.

The ministry is due to meet with the governors in the Amazon region on Thursday to discuss ways to combat the issue.

Environmental groups and NGOs say that Brazilian President Jair Bolsonaro's rhetoric and his environmental policies are to blame for the rise in illegal activity in the Amazon.

"The Bolsonaro government is responsible for every inch of forest destroyed. This government today is the worst enemy of the Amazon," said Marcio Astrini, public policy coordinator for Greenpeace, in a statement.

Concerns over the future of the Amazon were heightened after the right-wing leader took office in January.

Bolsonaro has advocated loosening protections for natural reserves and indigenous lands in the rainforest as a way to boost economic development.

One of the biggest drivers of deforestation in the region is also the high price of beef in Brazil, which encourages land-grabbing for cattle ranching.

The Amazon is the largest tropical rainforest in the world and is considered key in the fight against climate change due to the amounts of CO2 it absorbs.

Fires that raged through the Amazon in July and August this year sparked global concern and drew criticism from French President Emmanuel Macron.

Presidents and representatives from the Amazon region have agreed to coordinate rainforest preservation measures as wildfires continue to ravage the Amazon rainforest. (07.09.2019)