Brazil's next fire disaster, in the Pantanal wetlands

Brazil's Pantanal wetlands are on fire. While the world was shocked by the wildfires that ravaged the Amazon, few seem to have noticed the destruction of the world's largest tropical wetland area. 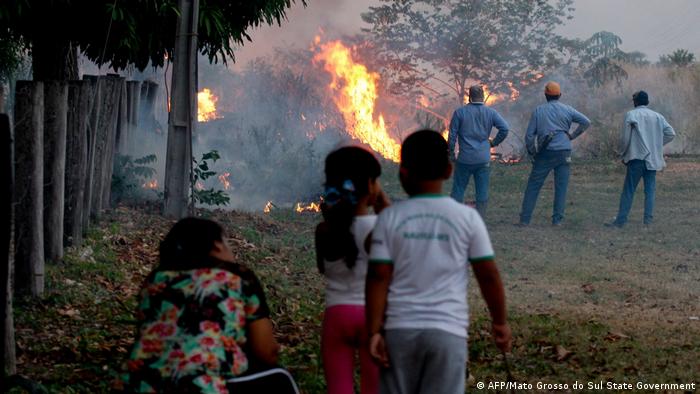 Another Brazilian bioregion is ablaze. After devastating wildfires in the Amazon rainforest in August and September, fires are now burning in Pantanal. According to Brazil's National Institute for Space Research (Inpe), in the past few days 122,000 hectares have burned in the region around the cities of Corumba and Miranda in the state of Grosso do Sul alone. Yet, the world media does not seem as interested in these fires as in those that ravaged the Amazon.

"Right now, it's raining, which will limit the number of fires but there are areas where it is not raining and where the fires are still raging," Felipe Dias, the head of the environment NGO SOS Pantanal, told DW from Campo Grande.

The number of fires in Pantanal has broken all records this year, with over 8,000 registered. In September, the authorities in Mato Grosso do Sul said that so far this year 1.3 million hectares had burned down and that a state of emergency had been declared in the region.

Felipe Dias estimates that at least 1.5 million hectares have burned since August. "It's normal to have fires here but what's not normal is the extent; the amount of burned areas," he points out. He says that one reason for the fires is that it has been so dry. Some fires were caused by lightning.

He also partly blames Brazil's neighboring states Bolivia and Paraguay. The Pantanal wetlands span all three countries. Dias says that some of the fires that have devastated the Brazilian Pantanal this year broke out across the border. "This year, the whole Pantanal caught fire."

Carlos Rittl from the climate think thank Observatório do Clima explains that "most of the fires are caused by humans," generally farmers, cow herders or loggers who want to clear the land. "The fires have been going on for months but they are not drawing the same attention as those in the Amazon. Yet, the situation here is very very critical."

He thinks that the fires in the Amazon may have received more attention than those in the Pantanol because of the dimensions. There is more diversity and more deforestation, and more fires, in the Amazon, so it makes sense that they should always be in the headlines.

The government in Brasilia has also been inattentive, says Dias. "Not many people really know the Pantanal. So they don't pay it much attention. We observed how late the government reacted to the fires. We need a preventative monitoring policy here and the government should participate."

Rittl also blames the government. "This is a consequence of the government's discourse of tolerance regarding the crimes, its promises that the laws will be changed and the fact that nobody is punished for the illegal fires.

President Jair Bolsonaro and environment minister Ricardo Salles are constantly meeting people who commit crimes in the gold mines of the Amazon. And constantly they raise hopes that everything that is illegal will be legalized. This means that people think the government will allow everything," Rittl says. 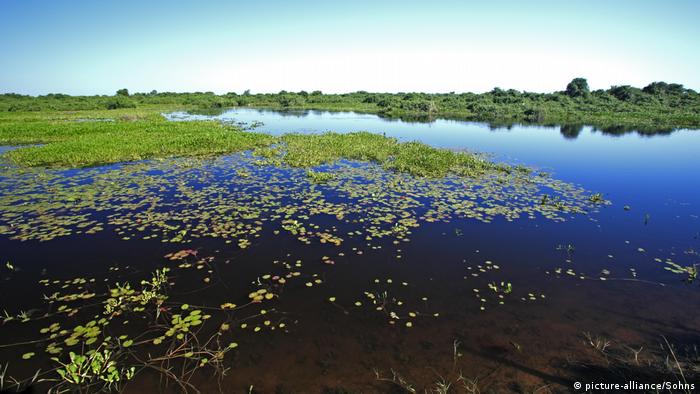 There have been numerous fires in Brazil's Pantanal this year alone

No soldiers for Pantanal

While the situation remains critical in Pantanal, the fires in the Amazon have subsided. Tens of thousands of soldiers were sent in at the end of August to fight the fires. Now, there are just a few left.

"Something changed in the Amazon when the fires became an international scandal and Brazil's agribusiness attracted negative headlines," says Rittl. "The government sent soldiers in to fight the fires. But this has not happened in Pantanal. The fact that there has been so little interest means that people are not afraid of committing crimes and setting fires."

Dias thinks that more efforts should be put into protecting the Pantanal, which he describes as a paradise that still boasts 83% of its original vegetation. "It's unique and completely different from all other regions. There is less biodiversity than in the Amazon but you can really see the animals here. There is a huge potential for tourism."

Unfortunately, the situation will change with new laws regarding the cultivation of sugar cane in Brazil. "Pantanal will also be affected," warns Rittl. "The cattle industry will also become a more important economic development in the region," he adds — not a particularly encouraging prospect for Pantanal, Brazil or the world.

The US state of Louisiana has funded a program to slaughter nutria, or swamp rats, laying waste to the coastline. The animals eat the roots of swamp vegetation to the point they have no chance of growing back. (17.07.2019)

When the river Magdalena in Colombia bursts its banks the water flows into a cienaga, a unique wetland bursting with invaluable biodiversity. Today, climate change has put this under threat. (21.01.2019)