The Russian dissident politician has been repeatedly arrested and tried for his protests. Each time, he has called on Europe's human rights court for help. But will that path remain open after Thursday's decision? 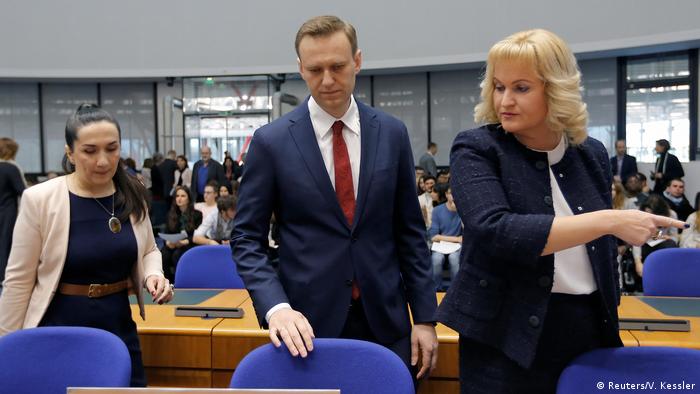 The European Human Rights Court is set to decide on Thursday whether Russian anti-corruption activist and opposition politician Alexei Navalny's frequent detentions at the hands of Russian authorities were politically motivated and whether they were legal. The 42-year-old activist accuses authorities of purely political motives for detaining him seven times at demonstrations between 2012 and 2014.

On March 4, 2012, Vladimir Putin was elected to his third term as Russian president. Putin's return to the the presidency — after four years as prime minister — was accompanied by months of protests, the likes of which the country had not experienced in years. Navalny was already a leading opposition figure, and was among the thousands of activists who gathered on Moscow's Pushkin Square on March 5 to protest against Putin. Once the rally ended, several hundred protesters remained in the square. Police forces moved in, violently dispersed the crowd, and arrested Navalny. He was freed later that night and forced to pay a minor fine.

Navalny has called on the European Court of Human Rights (ECHR) in Strasbourg to judge the legality of this and six other arrests. The outspoken Kremlin critic will be in Strasbourg on Thursday when the Grand Chamber announces its verdict, though it was briefly unclear on Tuesday if he would be able to attend: Authorities suddenly prevented him from leaving Russia, citing allegedly unpaid court dues. However, after footing the bill, he was clear to depart.

In the past few years, the 42-year-old has transformed from a somewhat nationalistic dissident into a powerful opposition leader. He is especially proficient at mobilizing young people to join his cause; his well-produced investigative videos exposing the misdeeds of Kremlin-friendly elites reach millions on the internet. He was barred from running in the 2018 presidential race due to a corruption conviction. Navalny believes he was excluded for political reasons, but Strasbourg's ECHR did not share his interpretation, saying he had access to a fair trial.

While judges in Russia have mostly sided against Navalny or rejected his appeals, the ECHR has often backed the dissident, albeit not on all issues.

Navalny's latest ECHR court case, initiated in November, focuses on the partial blocking of his website after it was used to publish research on Russian oligarch Oleg Deripaska's alleged links to Paul Manafort, onetime manager of Donald Trump's presidential campaign. Prior to this case, the ECHR had already ruled that Navalny's arrest at a previous rally had been unlawful. The court also sided with Navalny's appeal against his two convictions for corruption. And agreed with him when he appealed the 2015 decision of Russia's Federal Migration Service (FMS) not to issue him a passport.

But his biggest legal victory so far dates back to 2016: ECHR judges ruled that he was not afforded a fair trial in 2013, when he was convicted for allegedly embezzling money from a Russian timber company. Even though Russia's supreme court later turned the conviction into a suspended sentence and fine, a subsequent court case reinstated the initial verdict.

Read more: 'There is no pro-Putin majority' in Russia, says Navalny

Navalny's current case regarding his numerous arrests in Russia cites five distinct articles of the European Convention on Human Rights, and the odds that the judges will largely agree him are high. In February 2017, one ECHR court has already ruled that Russia had infringed against Article 5 (a person's right to liberty and security), Article 6 (right to a fair trial) and Article 11 (freedom of assembly and association) of the European Convention on Human Rights. At the request of both Russia and Navalny, the ECHR's Grand Chamber will make a final decision in the case.

The court has, however, rejected Navalny's request to examine the alleged breach of Article 14 (prohibition of discrimination) and Article 18 (permitted restrictions). He had hoped to utilize both to prove that Russia's conduct against him has been "politically motivated.” In a previous, albeit not yet final, verdict, the court judged that Russia should pay Navalny over €60,000 ($68,900) in damages and refund his expenses. It is expected that the ECHR's Grand Chamber will come to a similar decision.

Strasbourg's judges will most likely again side with Navalny on many issues. But it remains to be seen for how much longer he and his compatriots will be able to call on the ECHR.

Russia has repeatedly threatened to withdraw from the Council of Europe (CoE) given the temporary suspension of its CoE delegation following Moscow's annexation of Crimea in 2014. In response, Russia ceased funding the CoE. In the current tense political climate, the dispute could escalate and Russia might leave the body for good. If that happens, it would no longer abide by ECHR rulings — which could spell further trouble for human rights defenders in Putin's Russia.

What is the state of the freedom of expression in Russia? And why is it so difficult for the Kremlin to deal with the country's revolutionary past? DW spoke to Russian historian and publicist Irina Sherbakova. (07.11.2017)