Alexei Navalny: ′There is no pro-Putin majority′ in Russia | Europe | News and current affairs from around the continent | DW | 08.02.2018

Alexei Navalny: 'There is no pro-Putin majority' in Russia

Opposition politician Alexei Navalny has been barred from running for president in Russia. In an interview with DW's Zhanna Nemtsova, he explains why he is calling for a boycott of the country's upcoming election. 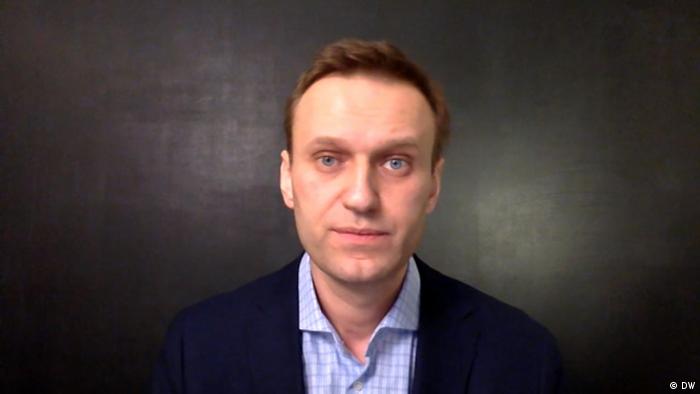 DW: On January 28, you were arrested at an unauthorized demonstration in Moscow. Are you going to spend the election day on March 18 as a free man or behind bars?

Alexei Navalny: The indications seem to be that I will be spending the election day, and I am referring to "election" in quotation marks, in a special prison. That's the plan, I suppose. On January 28, I was arrested and then immediately released. But I still haven't been given my papers back. Apparently, I've still got 30 days in jail ahead of me. It is probably planned that they will start on February 17, and then I will be released on March 18, 19 or 20.

What sort of consequences should the participants who took part in the demonstrations across the country on January 28 expect?

The current leaders have the ability to proceed against the protest movement in two ways: First, they can prohibit all such actions and second, they can try to impose demonstrative punishments. At least 40 people were arrested. Some of them have already been released, and some are still in custody.

The most important thing, it seems to me, is that people are no longer letting themselves be intimidated. It has become clear to people that if they keep being afraid then the only remaining way to express political beliefs, to march on the streets, will also be barred. 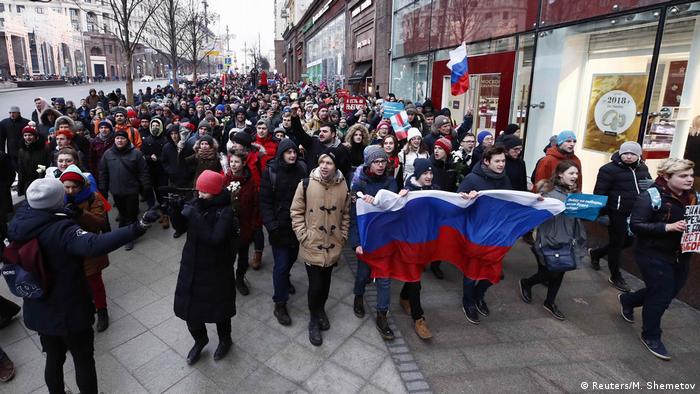 On January 29, the US Treasury Department presented a report to Congress on Russian oligarchs and top officials, listed according to their assets and proximity to the Kremlin. What do you make of this so-called Kremlin Report?

The list should actually be much longer. These are the people who are the corrupt core in Russia, who are the main beneficiaries of corruption. I would like to see them all subject to individual sanctions. It would also be desirable if they could not live abroad, for example, and travel over to Germany and then come back and tell us how terrible European depravity is, referred to as "Gayropa," and that we should choose another path here.

What do you hope to achieve by calling for a boycott of this election in Russia? Do you believe that elections can bring about any change in President Vladimir Putin's authoritarian regime?

Of course I think they can. That's why I wanted to stand for election. I traveled all over the country. I made speeches. I even made appearances in areas that are considered to be absolutely "pro-Putin," such as the Kemerovo Oblast. I also spoke in Novokuznetsk. I know full well that it is possible to win an election against Putin. Frankly, he knows that himself. That's why he wouldn't let me stand for election.

It is always said that Russia does not need a revolution or a Euromaidan, which is the name given to the wave of demonstrations and civil unrest that began in 2014 in the Ukrainian capital, Kyiv, and led to the ouster of President Viktor Yanukovych. At the same time, it is said that only you can manage to get people out onto the streets. How do you define the limits of what is considered a peaceful protest?

First of all, I'm not the only one who can get people out onto the streets. There are many wonderful people who are undertaking actions in different regions. Secondly, it is not I who brings people onto the streets, but the notion of injustice. Putin himself brings people on the street through his corruption, his incompetent administration of the country.

I certainly believe the people have the right to protest against a tyrannical regime. But what's happening in Russia at the moment are only absolutely peaceful actions. You can see that the mood of the demonstrators is much more peaceful than that of the authorities, who manage to turn every demonstration into a military operation. 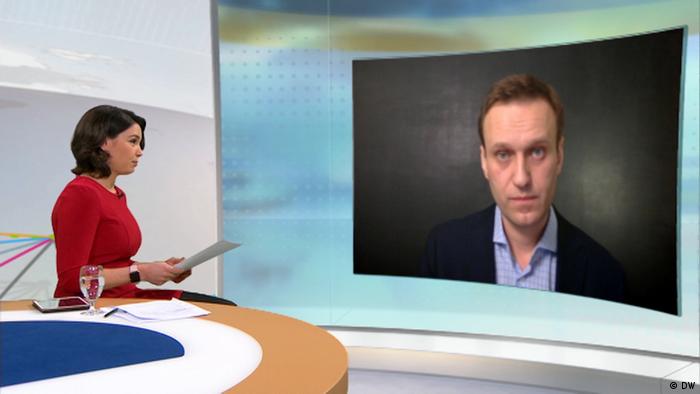 Is it realistic to expect that the pro-Putin majority will become a majority in society that wants to see change?

There is no pro-Putin majority. There are people for whom the illusion has been created that there is no one else except Putin. We've done dozens of surveys in focus groups all over the country. The most important thing they say when they are asked why they vote for Putin: "There is no one else. We don't like Putin, but there's no one else." And that is precisely what the Putin regime is based on. There is no majority.

We can achieve a majority of our own, precisely because we work in real terms and have a real agenda. We are talking about poverty, injustice, the unfair distribution of wealth and the rising costs of health care and education. In fact, we form a majority, which already comprises around 30 percent of the inhabitants of the largest cities. If we keep working on it, there will be many more. That is our task. It's possible to achieve.

A fourth term in office for Putin is inevitable. Many believe that after the elections there will be harsher crackdowns, including against you and your supporters. Are you prepared for this?

Putin has not just been in power for a couple of years, but since 1999. We have seen a general intensification of repression after each re-election. He can't hold on to power otherwise. That is why the repressions will certainly increase. But we're ready, we're not afraid. We're not giving up.

Blogger and lawyer Alexei Navalny, 41, is regarded as the most influential opposition politician in Russia. He has been barred from running as a presidential candidate, based on previous convictions for financial crimes. The European Court of Human Rights has described Navalny's suspended sentence as "arbitrary."

The interview was conducted by Zhanna Nemtsova