Russian authorities have seized "computers, laptops and printed materials" at the campaign headquarters. Campaign officials have warned of growing pressure to call off a boycott of the presidential election. 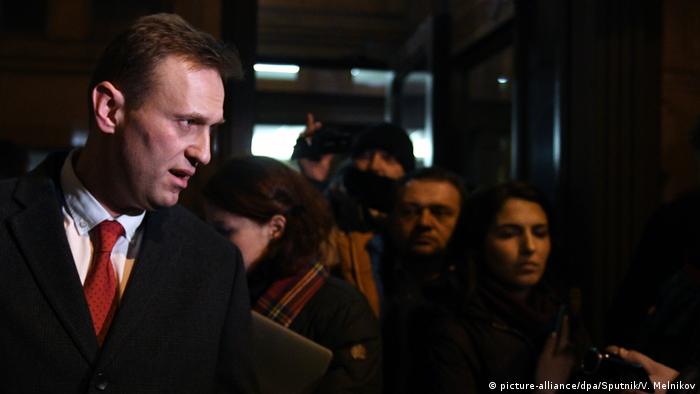 On Twitter, the Saint Petersburg campaign office said police "chucked out everyone except the coordinator (and) seized equipment, turned off our security cameras and covered the windows … so we cannot film."

Read more: Russia's presidential election: What you need to know

"They are seizing computers, laptops and printed materials. They said they received a signal that we are distributing some dissident leaflets and that's the reason for the seizure," said Mikhailov.

Russian authorities have increased pressure on them to end calls for a boycott of the presidential election slated for March, which incumbent President Vladimir Putin is widely expected to win.

"In the last two days, there have been searches in 11 offices, they are taking away equipment and leaflets supposedly calling for a boycott," Ruslan Shavedinnov, Navalny's campaign press secretary, told AFP.

Read more: Russia warns US against 'meddling' in presidential election

Navalny is technically barred from running for president due to criminal convictions for fraud, which have been viewed as political retribution for his anti-corruption campaigns targeted at high-level graft. Earlier this month, Russia's Supreme Court reaffirmed the ban on Navalny.

However, in the wake of the raid, Navalny renewed his call for a boycott, saying authorities "are afraid of a boycott by voters. That means it's the right thing to do. Join us."