A look at German tourism over the ages

The bankruptcy of the travel company Thomas Cook does not mark the end of mass tourism. But it is a warning sign, says tourism researcher Hasso Spode. DW takes a look at the history of German tourism. Miles of traffic jams on the highway and endless lines at airport counters — that's the reality of summer holidays in Germany these days. But how did it come to this, centuries after German pilgrims seeking out the new world became some of the first real travelers?

Indeed, several thousand years have spanned between the early hikes to the temples of the gods in Ancient Egypt to the mass tourism of today. Over time, travel destinations, modes of travel and the purpose of travel have significantly changed.

Hasso Spode, who heads the Historical Archive on Tourism at the Technical University of Berlin, estimates that package tourism, which made up the primary business of the once huge and now bankrupt travel company Thomas Cook, still accounts for 40-50% of the travel volume today. "But the zenith has been reached," he said.

But what distinguishes this form of mass tourism from traveling? "Tourism is a journey without an actual purpose," said Spode. Travelers once always had a mission. "For example, pilgrims wanted to find salvation, conquer the conquerors," said Spode.

In the 18th century, however, people began to travel for fun. Vacation as "paid leisure time for the purpose of recreation" was, according to Spode, a European invention emerging out of the period of industrialization.

Thomas Cook: Vacations for the masses
"The whole world is traveling," writer Theodor Fontane (1819- 1898) once commented about the wanderlust of his German compatriots.

By the middle of the 19th century "package tourism" had been born thanks to the expansion of the railway. In July 1881, Englishman Thomas Cook organized the first railway journey of 570 activists of the Leicester Abstinence Movement to nearby Loughborough. The train journey in an open wagon in the 3rd class, which did not include seats, cost one schilling per person.

But the aim was not to earn money. Instead, the lay preacher Cook wanted to guide people away from the local pub and the gin bottle. "Connecting people with people and people with God" was his motto. The cost of the trip also included a ham sandwich and a cup of tea.

A sort of social tourism likewise began to emerge in Germany, organized by charities and trade unions. The hiking association "Naturfreunde," for example, offered hiking tours for workers.

"Again and again, our people are striving to escape the grit and constrictions of the big city and take a break from the joylessness of work for a brief time," the association remarked in 1895. It called on "comrades, friends of nature, and working-class hikers to sling their backpacks on their backs and grab their walking sticks to roam the countryside and get closer to nature, other people and the nation."

The National Socialists also recognized the political power of a vacation, as evidenced by Adolf Hitler's dictum: "I want workers to be granted sufficient holiday time because only when a people keeps its nerves together can one achieve truly great politics."

The legacy can still be witnessed on the island of Rügen. The Colossus of Prora was a massive holiday complex that was to host some 20,000 guests at a seaside resort on the island — but whose construction was discontinued at the beginning of the Second World War in 1939.

Indeed, by the beginning of the war, KdF tourism had come to an end. "The Nazis controlled the leisure activities of their citizens," said Spode. A bird's eye view of tourists in Turkey

A spot in the sun

With the German economic miracle of the 1950s and rapid development after the war, the travel budget grew, as did the desire of Germans to travel. This was helped with national paid vacation leave for employees that first emerged during the Weimar Republic, and which was increased to two weeks per year after the war, and to three weeks in the 1960s.

"People started daring to cross the Alps with their VW beetle or even their Vespa," said Spode, reflecting on postwar tourism fueled by mass automobile ownership. At the end of the 1960s, the average income had doubled and often increased vacation pay was added to the package.

"Mass tourism slowly began to emerge," said Sina Fabian, historian and cultural studies researcher at Berlin's Humboldt University. "You could book with a tour operator and you didn't have to organize it yourself."

The development of tourism packages and growing access to cheaper travel resulted in a "democratization of travel," said Spode.

And by the 1970s, large passenger jets were making transport to faraway travel destinations more affordable. The Spanish island of Majorca was condescendingly dubbed the "cleaning women's island," implying that even cleaners can afford a trip there. Beaches around the Mediterranean Sea were dominated by German sun worshipers and sarcastically dubbed "Teuton grills." 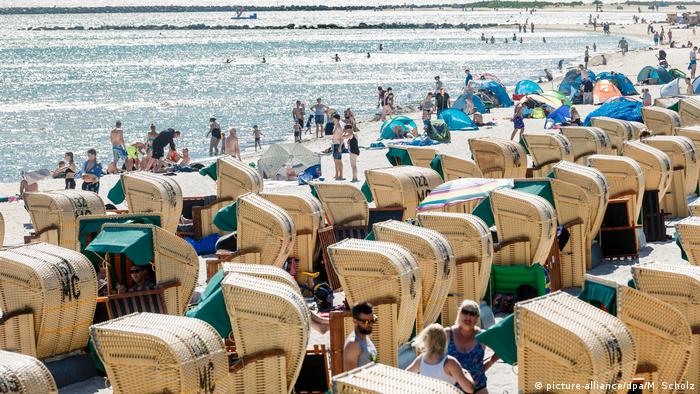 A typical sight at the Baltic Sea Coast

On the other side of the Wall

Travel was also becoming mainstream behind the Iron Curtain in the German Democratic Republic (GDR). "There was subsidized social tourism in the GDR," said Spode. Here too, however, the state tried to control the vacations of its citizens in a similar way to National Socialism, this time via the vacation service of the Free German Trade Union Federation that was state-controlled by the Socialist Unity Party (SED).

Nearly every GDR citizen could go on holiday; but the choice of destination was restricted. Those who did not want to stay in the GDR were only permitted to travel to other communist countries such as Hungary, Czechoslovakia or Poland.

It wasn't until the fall of the Berlin Wall in 1989 that former East Germans could do as the West Germans did and explore the world on holiday. "Freedom to travel" (Reisefreiheit) becomes the word of the year in 1989.

"The tourist destroys what he or she is searching for the moment he or she finds it," wrote German author Hans Magnus Enzensberger back in 1957, referring to the hordes who were already descending on holiday destinations.

Today, classic European holiday destinations such as Greece, France, Portugal or Spain are visited by more tourists every year than they have inhabitants, turning entire villages into "human zoos" and causing irreparable environmental damage.

But the growth of online flight, hotel or restaurant reservations has ultimately been the death knell for traditional travel company Thomas Cook, with Hasso Spode referring to the "individualization of travel planning" marking a new era in the rapidly evolving culture of travel.

Britain's oldest travel agency has ceased trading. The UK government has stated it has plans "in place" to rescue stranded holidaymakers, while Germany will allow insurance companies to take charge. (23.09.2019)

The dawn dash to reserve the best sun-lounger by the pool - for years German and British tourists have fought this bitter battle. Now the fight will commence before the holiday - at the travel agency to be precise. (31.01.2018)

Thomas Cook, Europe's London-based travel concern, hung by a thread Sunday as it sought further investment funds while 600,000 holidaymakers worried. If stranded, the British government says it has plans "in place." (22.09.2019)