The collapse of one of the world's oldest travel agencies leaves a question mark over its profitable German operations. Will the government step in and will an insurance scheme to compensate holidaymakers be enough? 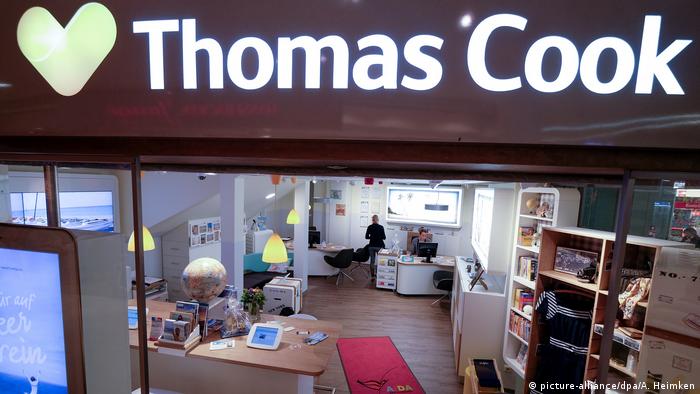 Thomas Cook may have been born and headquartered in Britain, but it is a familiar name in dozens of countries and its insolvency is causing a ripple effect, particularly in Germany.

More than 140,000 German holidaymakers have been impacted and tens of thousands of future travel bookings may not be honored. Hotels, resorts and airlines, meanwhile, could face tens of millions of euros in lost or delayed revenues.

Thomas Cook's subsidiary in Germany is still technically operating as of Monday afternoon but has stopped taking bookings. German media reported that the firm switched to emergency management mode upon the insolvency of its parent company in a last-ditch attempt to save itself from a similar fate.

In a statement, the company warned that if all options failed "the management would be forced file for bankruptcy on behalf of Thomas Cook GmbH, Thomas Cook Touristik GmbH, Bucher Reisen & Öger Tours GmbH and possibly other companies."

Although Thomas Cook group didn't release financial results for individual countries, it is widely known that its German operations are in a much healthier state than those in Britain, where the travel agent had huge debts and struggled to adapt to changing consumer tastes.

"It's easy to complain that it is old-fashioned but Thomas Cook has a good reputation in the German market," travel analyst Dirk Rogl told DW. "Yes, they've been under pressure but they're rather stable and have remained profitable over the long term."

The travel firm including one of its main German subsidiaries, Neckermann Reisen, have maintained a near 5% share of the ultra-competitive German travel market, according to Euromonitor, partly because a large chunk of German consumers still prefers to book holidays through a traditional agency.

"We still see a lot of consumer loyalty to these brick and mortar travel agency brands — this model still works in Germany," Stephen Dutton, senior analyst in travel at Euromonitor told DW.

However its main competitors, Der Touristik and TUI, still tower above Thomas Cook Germany with 11.6% and 11% shares respectively. 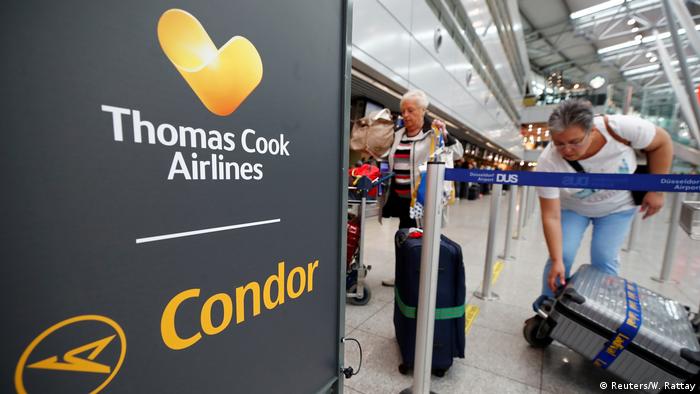 The German subsidiary has applied for a €200 million bridging loan from the government for its airline, Condor, which is being assessed. The airline made a €43 million profit last year and is on course to beat expectations in 2019.

Condor, which flies to 90 destinations on an aging fleet, will likely be an easy acquisition target even if the tour operator business does fail. In May, Germany's flag carrier Lufthansa made a non-binding offer for the airline, which was thwarted after China’s Fosun took a stake in Thomas Cook group.

Condor said on Monday that its operations were continuing "on schedule" but that it could not fly Thomas Cook customers to their destinations.

Unlike Britain, which refused to entertain a last-minute bailout request for Thomas Cook group, the German government has been known to step in to save ailing firms. In 2017, it granted Air Berlin a bridging loan to help it maintain flight operations.

"I think the government must consider very carefully whether to intervene because the loss [of Thomas Cook] will have a huge impact on the whole travel industry," Rogl said, adding that he's concerned about the reputational damage to remaining tour operators.

Euromonitor's Dutton notes that Germany's travel sector is evolving, albeit a little slower than other markets, with new online travel firms catering to changing consumer tastes, including the rise of price-sensitive, last-minute deals. To him, Thomas Cook's demise will soon benefit its competitors.

"There's no lost business in terms of the overall booking space; it's just shifting to other players," he said.

The fund is limited to €110 million, and VUSR, the German association of independent travel agents, predicts some €300-400 million would be required to repatriate tourists and compensate for outstanding Thomas Cook bookings if its German operations went bust.

"We've never seen a bankruptcy on this scale before, so this would really be a crash test for the German insolvency protection scheme. There is a risk that there is not enough money," Rogl told DW.

Britain's state-run package holiday protection scheme, ATOL, will fund 100% of compensation claims and pays for the repatriation of holidaymakers who are left stranded by Thomas Cook's demise.

Dutton told DW that the loss of such a high-profile tour operator was "a wake-up call" for the rest of the travel sector already hit by a range of online disrupters from Airbnb to Kayak.

However, Europe's number one tour operator, the Hanover-based TUI, remains on much firmer ground. Despite issuing several profit warnings this year, the Anglo-German travel firm has much lower debt and owns many of its resorts and cruise ships.

"They're Germany-based, they're such a household name and they've been able to beat the odds in the traditional model unlike Thomas Cook."

Britain's oldest travel agency has ceased trading. The UK government has stated it has plans "in place" to rescue stranded holidaymakers, while Germany will allow insurance companies to take charge. (23.09.2019)