Flights often seem to be the fastest and cheapest travel options. That's not so, as DW's data visualizations show. Factoring in transit time and environmental damage, here's how to assess the true costs of travel. 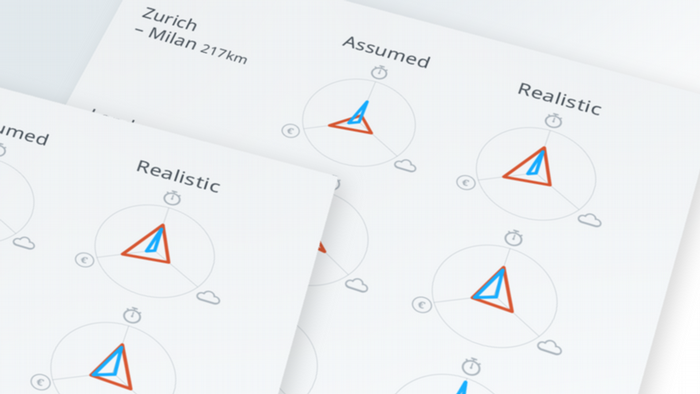 Read this article in German or Russian.

How much is a plane ticket from London to Paris? The answer is only a web search away, and more and more Europeans are being enticed by cheap prices to take short flights for holidays, family visits or business. It's fast enough for a weekend trip and can cost much less than the train.

Many of us make these journeys knowing that there are hidden costs. Aviation, after all, emits greenhouse gases that accelerate climate change.

In order to calculate the real costs of travel, DW has collected thousands of ticket prices, journey times and CO2 emissions figures for trains and planes on six direct routes between European cities: Berlin-Warsaw, Munich-Budapest, London-Amsterdam, London-Marseilles, Paris-Barcelona and Zurich-Milan.

Our analysis shows on which routes the train is giving the plane a run for its money — and reveals how the numbers would change if we were made to pay for the environmental consequences of travel.

For each of our routes, we sampled ticket prices over a period of six weeks before departure. We wrote a computer program to look up airline tickets on Google Flights and rail tickets on Trainline, both of which provide prices from a range of operators. The chart below shows the best prices on an average day for direct journeys by train and plane.

For half of the routes, a plane ticket is cheaper than a train ticket. On most routes, the further in advance you buy a ticket, the smaller the price difference.

For routes on which budget airlines operate, it's no surprise that the flights are cheaper than the trains. However, on three of our routes, the trains offer savings. And if you need to travel last-minute — in the next week — the price gap between plane and train can be narrower.

The train journeys can look daunting when compared with the speedy travel times quoted by the airlines. But it's not really a fair comparison. The train services generally run from city center to city center, and, with the exception of routes involving the UK, you can turn up at the station minutes before departure. Reaching the airport, going through security, waiting at the gate and leaving the destination airport easily adds three hours to the flight times. The train starts to compare more favorably.

Some of our routes have benefited from investment in rail infrastructure in recent years. For example, the Zurich-Milan train travels through the Gotthard Base Tunnel, an €11 billion shortcut through the Swiss Alps, taking half an hour off the previous journey time. Eurostar launched its direct service from London to Amsterdam earlier this year. And the Paris-Barcelona trip used to take 12 hours until a new high-speed line across the French-Spanish border opened in 2013.

If you've flown with a budget airline, you've almost certainly discovered the unexpected extras that can ramp up the cost. Getting to the airport, checking in a bag and choosing a seat can exceed the original price of the ticket. But how can we measure the hidden environmental cost of our journeys?

When it comes to greenhouse gases, DW used figures from IFEU, an environmental consultancy firm that runs EcoPassenger, a website that estimates the emissions per traveler for any given journey.

The first task when calculating the environmental cost of a flight is to determine the greenhouse gas emissions generated by the aircraft. To give a sense of scale, the tank of a Boeing 747 holds over 200,000 liters (52,000 gallons) of kerosene when full — about as much fuel as 4,000 small cars. Taking off and climbing to altitude at the start of the trip are the most fuel-intensive phases. That means a short-haul flight will require more fuel per kilometer traveled than a long-haul flight: 75 grams of kerosene per kilometer (roughly 4 ounces per mile) per passenger for a flight of 250 kilometers (150 miles), for example, versus 33 grams per kilometer for a flight of 1,000 kilometers, according to IFEU.

Read more: To fly or not to fly: The environmental cost of air travel

Working out how much carbon dioxide is released by burning kerosene is pretty straightforward. But there's a complication: Jet engines release other environmentally-damaging substances too — often at high altitude — and scientists aren't certain about exactly how bad these are for the environment. The extra impact of nitrogen oxides, ozone, water vapor, soot and sulfurs released by planes is called the Radiative Forcing Index. The IFEU model assumes that this additional global warming effect comes into play when flying at a height of 9 kilometers or higher.

High-speed trains run on electricity, so the IFEU estimates their greenhouse gas output based on the emissions involved in generating power. These vary by country: Poland, for example, generated 89 percent of its electricity through coal, gas or oil in 2015, whereas in Germany the figure was 58 percent.

It's not hard to understand the time and money involved in a trip. But how are we supposed to decide whether 248 kilograms (546 pounds) of carbon dioxide is a reasonable price to pay for our weekend minibreak?

Enter the social cost of carbon. Economists have been working on this idea for years. The theory is simple: If we can estimate the cost of climate change on society — and we know that greenhouse gases lead to climate change — we can put a price on carbon emissions. The main purpose is to help governments decide whether spending money on carbon-reduction measures is worth it. But we can also apply the social cost of carbon to our journeys.

There is no academic consensus as to how much the social cost of carbon should be. In the United States, the federal Environmental Protection Agency has calculated it at $42 per metric ton of CO2 in 2020, rising to $69 in 2050. But some researchers say those figures fail to capture the potential consequences of catastrophic climate change and the number should be at least 10 times higher. So, for our calculations, DW has used a figure of $574 (489 euros), based on research published by Ireland's Economic and Social Research Institute. This represents the high end of estimates of the social cost of carbon.

Adding the social cost of carbon to our train and plane ticket prices means things start to look quite different:

Planes are cheaper on three of the routes. If you add the social cost of carbon, the actual figure is much higher — especially for planes, which become the way-more-expensive option to travel.

We've presented all the data in one diagram showing the ticket price, journey time and carbon emissions for each route. The smaller triangles represent journeys that are cheaper, faster and/or more environmentally friendly.

When factoring in all the above-mentioned aspects, the chart shows that the overall cost of a train trip is now lower than that of a flight for nearly all of the journeys.

The smaller triangles represent journeys that are cheaper, faster and/or more environmentally friendly. With a more realistic assessment of travel times and the social cost of carbon factored in, the cost of train travel generally runs lower than that of flights, with the blue triangle appearing almost fully within a red triangle.

Of course, this is just an experiment, and there's no academic consensus as to how much the social cost of carbon is, or whether it is the right approach to environmentally friendly decision-making. But adding a levy to ticket prices based on emissions — a carbon tax — could be an effective way of decreasing the contribution of consumer air travel to climate change and encourage people to find more environmentally friendly ways of making their journeys.

David Hodgkinson, an associate professor of law at the University of Western Australia, argues that a carbon tax is needed, especially given the complexity of other cross-border strategies for reducing emissions. "People understand it," he said. "They might not like it, but they understand the properties of a tax. ... Most people, and even the airline industry, would accept that there needs to be some form of price on aviation emissions."

Hodgkinson is critical of existing initiatives to tackle aviation emissions, including a carbon offsetting model drawn up by the International Civil Aviation Organization. "States have signed up to it, and airlines are on board, but it's not going to address in substance the emissions problem. Emissions will likely increase year on year," he said. "For some [airlines] things aren't going to kick in until well past 2030, and one doesn't know what the world is going to look like in 2030 from an emissions point of view."

Roger Tyers, a behavioral scientist who has researched carbon offsetting approaches at the University of Southampton, believes that increased costs alone may not be enough to reduce the demand for air travel. "Flying has become so ingrained in people's behavior that the prices are probably quite unlikely to deter people," he said. "Those who fly are likely to be — in a global sense — wealthy, and they will probably take the hit." Indeed, other academics have estimated that just 2 to 3 percent of people worldwide fly internationally in a given year.

Read more: The battle between high-speed trains and low-cost airlines

He said more investment in high-speed rail would help close the gap in journey time, and that people need cultural signals to encourage them to change their behavior.

Tyers said, however, that European leaders have been unwilling to confront the proliferation of consumer aviation. "It's a very reliable source of economic growth," he said. "The conversation about flying is one that government doesn't want to happen."