The Colossus of Prora: from Nazi ruin to holiday resort

Planned for 20,000 guests, Hitler's monumental holiday camp complex on Rügen is a bizarre remnant. DW reporter Maike Grunwald wandered through its ruins in 2005, returned in the summer of 2019 — and was amazed. 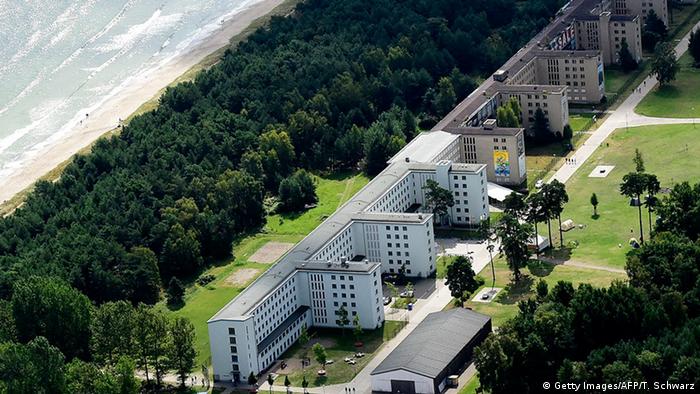 The wind from the sea cuts through our jackets. The clouds are dark, like the chain of ruins we're trudging along. Block after block, they line the coast for kilometers. It's like a bizarre dream in which you walk and walk and never arrive.

That was how I experienced what was called the Colossus of Prora on the Baltic Sea island of Rügen in January 2005. It was built on the orders of Adolf Hitler in the 1930s, according to the designs of a Nazi architect, Clemens Klotz — whose surname actually means block. The manic aim: 20,000 people at a time were to vacation in the nearly five kilometer-long (3.1 mi) holiday camp, arranged by the Nazi "Kraft durch Freude" (Strength through Joy) organization, known as the KdF for short. Its mission was to control and bring into line the German population's leisure time. All 10,000 rooms were to have a sea view, which explains the gigantic length of the structure.

A monument to megalomania

Prora perfectly represents the Nazi regime's megalomania — and its incompetence. When the regime instigated the Second World War in 1939, construction was discontinued. The complex was never completed. No KdF tourist ever vacationed in the "seaside resort for twenty thousand". Instead, the housing blocks, which were shells, were used militarily — as barracks, for instance, first under the Nazi regime, and then in communist East Germany, the GDR. After the Berlin Wall fell and Germany was reunited, the complex was officially historically listed. Museums and artists' studios moved in, but large sections of the monstrous structure, considered the longest of its kind in the world, decayed. 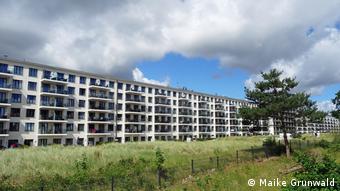 Gigantic: The Colossus of Prora, viewed from the sea

Holiday idyll on a sunny beach

We skip ahead to the summer of 2019. There's dappled sunlight on the Baltic Sea. My hair is wet from swimming. I watch the children playing on Prora's beach with its fine golden sand, one of the loveliest on the Baltic. A little boy wants to save all the jellyfish by dragging them back into the shallow sea. Couples relax in roofed wicker beach chairs; families fly kites.

From their new towers, lifeguards watch over the swimmers. Since 2018, Prora has been officially recognized as a resort. The promenade of the fashionable neighboring seaside resort of Binz was extended as far as here. The tourist resort railway now also stops at the old KdF camp — a holiday resort in the making. 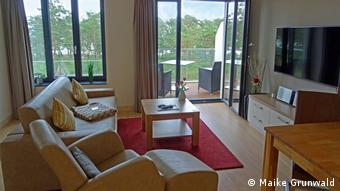 Room with a view: The author's holiday apartment in the Prora Solitaire Hotel

My holiday home is a few steps from the beach, just behind the dunes with their scented pines — in fact, actually in the Colossus of Prora, in Block II. It's scarcely recognizable, with its now white facade and glass balconies, on which colorful bathing suits and beachwear are drying in the sun. This section now houses the Prora Solitaire, a hotel with apartments and a spa. Instead of the original 12.5 square meters (135 ft²) of the twin rooms with shared showers intended for the "Strength through Joy" tourists, guests now reside in luxurious holiday apartments, 28 to 120 square meters (ca. 300–1390 ft²) in size, with ensuite bathrooms and fully-equipped kitchens.

The new spa area has a sauna and indoor swimming pool. Children paddle in the two outside pools. The lobby is a new glassed-in extension. The walls behind the reception desk are covered in plants. A huge screen displays impressions of the Baltic Sea. 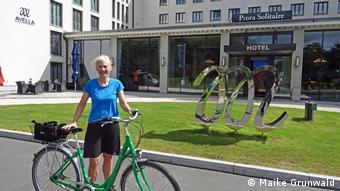 A voyage of discovery: The author in summer 2019 in front of the Prora Solitaire Hotel in Block II

Restaurants and tours through unrenovated sections

I can scarcely wait to rediscover the huge complex that has changed so much. But this time I want to go by bicycle. There is now a place to rent them, also in Block II, where a hairdressing salon, a boutique, an Italian restaurant, a bistro with fish sandwiches, a burger restaurant, a cafe and a bakery have now opened.

The promenade is so popular that I have to cycle carefully. I leave behind Block I, which houses another hotel, on my way northwards. Block III, where holiday apartments are also set to be built, is a mixture of unrenovated sections, whitewashed segments and construction sites. 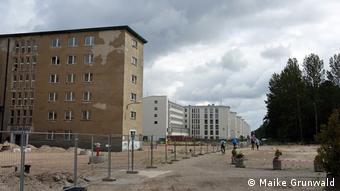 Old meets new: Unrenovated sections of Block III with the Block II hotel in the background

Behind it lies the historical center of the KdF complex, where a festival hall, cafes, swimming, gymnastics and concert halls and theaters were planned. It's well worth taking a long break to see the permanent exhibition MACHTUrlaub, which the Prora Documentation Centre has been showing since 2004. Guided tours of the grounds also reveal exciting and surprising details about the architecture and history of the KdF complex.

That also interested vacationers from my hotel whom I met on the tour. "Actually, the beautiful location right on the beach brought us here, and the fact that it's accessible by train and was less expensive than comparable accommodation in Binz," says a couple from the German state of Rhineland-Palatinate, who are here with their 13-year-old son. "But as we're already here, we wanted to know more about its history." They say they would recommend the exhibition and the guided tour. 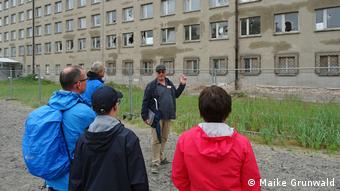 Exciting: A guided tour of the grounds provided by the Prora Documentation Centre

Other parts of the colossus are large building sites: among other things, a supermarket and doctors' offices are planned in the historical center. In contrast, Block IV has been renovated to a great extent, with holiday lets and other apartments, along with assisted living for the elderly.  In front of Block V, where the "world's longest youth hostel" opened in 2011, I meet a Swedish family who is here only because of Prora's history, like a number of other day-trippers from all over Europe. Holidaymakers who spend the night here, among them many young families, are attracted mainly by the lovely beach, which isn't as full as the one in Binz. 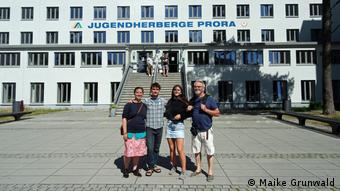 A magnet for visitors: Prora also attracts guests from abroad, like this Swedish family.

A place of serenity, nature — and unexpected encounters

There is a lot of biodiversity in the flora and fauna that managed to settle in the abandoned complex. Rare bat species and European swallows, for which new nesting places have been created on the renovated sections, are a treat for the eyes and the best protection against mosquitos. The Prora Natural Heritage Centre's interactive exhibition, a 15-minute cycle ride from the colossus, informs visitors about habitats on-site and offers guided walks. 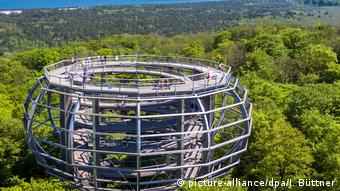 The treetop path in the shape of an eagle's nest

The Natural Heritage Centre's treetop path with its 40 meter-tall (131 ft) observation tower is a highlight in the truest sense of the word. It's also accessible to wheelchair users, just like the youth hostel and the Prora Solitaire Hotel, both with barrier-free units. Hitler, with his mania for euthanasia, would not have been enthusiastic. Nor would he have liked my neighbors in the hotel, a homosexual couple. Of course the "seaside resort for twenty thousand" was only for so-called "Aryans" who accorded with the insane racial and other standards of the Third Reich. An advertising poster from 1939 shows a blond heterosexual couple in front of an idealized drawing of the KdF complex.

Prora, its past, its architecture and the renovation of the monument by private investors remain controversial. Some visitors find the complex oppressive; others are glad it wasn't torn down – that, too, was once considered. The controversial complex provides plenty of food for thought. Everywhere visitors exchange views.

The colossus has become a place to encounter both past and present. It continues to be an impressive monument but is now also an attractive holiday destination that is open to anyone who wants to vacation on one of Germany's most beautiful beaches. It's a mixture that I find unique.

Please note: Participation in the trip was sponsored by the Prora Solitaire Hotel.