5 ways the Ukraine war has changed the world

Russia invaded Ukraine 100 days ago. The first territorial invasion of a sovereign state in Europe in 80 years has left its mark — with impacts felt all around the world. 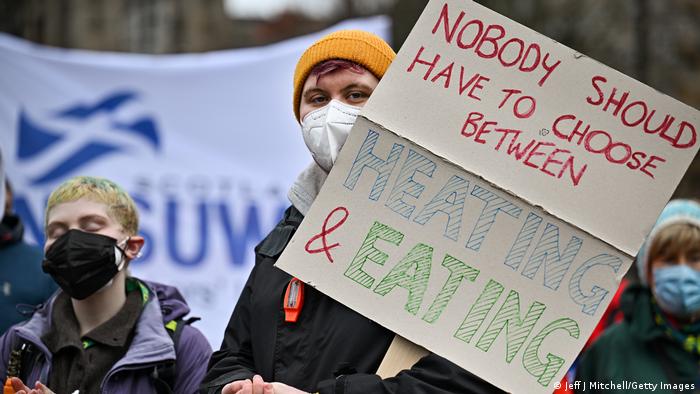 Russia has been accused of weaponizing resources by withholding them

When Russia invaded Ukraine on February 24, 2022, it was the first large-scale war of aggression in Europe since World War II.

Unimaginable to many, the war also brought many unexpected impacts that have reverberated across the globe.

Here are five ways the war has changed the world.

Since the Russian invasion, some 6.8 million Ukrainians have fled their country, along with at least an additional 7.7 million internally displaced.

After initially fleeing to neighboring countries, at least 3 million continued their journey, according to the UNHCR. Apart from Poland, Germany and the Czech Republic currently host the largest number of Ukrainian refugees, with circa 727,000 and 348,000 respectively.

Close to 2 million Ukrainians have returned to their country since they first fled the war — although some of this could be back-and-forth movement, the UNHCR notes.

The influx of Ukrainian refugees into the European Union has both galvanized support for them, as well as strained intake systems. Refugees who have settled in a new country are typically reliant on the social safety net of that country, at least for some time.

Ukraine is an important breadbasket, producing around half of the world's sunflower oil. According to the USDA, Ukraine accounts for 15% of global trade in corn and 10% of of global wheat trade. The conflict has cut off such exports, with Russia continuing to blockade grain at Ukraine's Black Sea ports.

This stranglehold has especially been felt in countries dependent on imports of Ukrainian grains and cooking oil, such as Egypt and India respectively. Yet the ripple effects go far wider.

Some warn that the conflict, along with extreme weather due to climate change and pandemic-induced economic shock, is fueling a global food crisis.

In May, the UN Security Council warned that hunger levels around the world have reached "a new high," adding that tens of millions could face long-term famine due to the war.

As of May, some 23 countries have imposed export restrictions on food — an indication of waning food security.

War in the world's breadbasket

Russia is the largest exporter of natural gas worldwide, the second-largest supplier of crude oil, and the third-largest coal exporter. Up until the war, three-quarters of its gas and nearly half of its crude oil had been going to Europe. In 2020, Russian oil, gas and coal accounted for a quarter of the EU's energy consumption.

But after Russia invaded Ukraine, the EU sought to end its reliance on Russian energy. "We simply cannot rely on a supplier who explicitly threatens us," European Commission President Ursula von der Leyen said in March.

Already in March, the Commission outlined intentions to wean the EU completely off Russian fossil fuels by 2030, as well as plans to drastically cut use of Russian gas two-thirds by the end of this year.

Maximizing gas storage is one point in that plan. Import of liquid natural gas, for example from the US, is another stopgap option. Meanwhile, some experts are predicting gas shortages and potentially rationing. With some European countries like Germany highly dependent on Russian gas, turning down the tap is proving to be painful

Many see the conflict as an opportunity for the EU to not only free itself from dependency on Russian energy, but also fulfill the bloc's commitment to climate protection by building out renewable energies and ramping up energy efficiency. Yet there are limits to how quickly this can be done.

And soaring demand for non-Russian sources of energy has seen prices shoot up across the board.

Shortages of both food and energy have played into a huge change in the lives of many since the Ukraine war started: Prices went up. 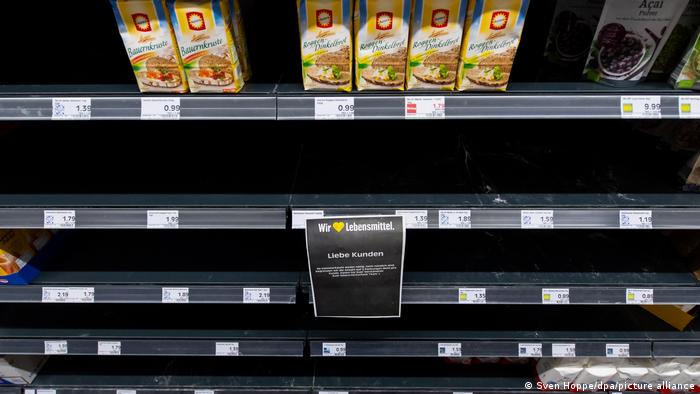 When there is less of something, its value increases — and when food and fuel get more expensive, so does everything else.

Prices for food in particular are soaring. The UN Food and Agriculture Organization's (FAO) food price index, which measures monthly change in prices for a basket of food commodities, reached an all-time high in March of this year.

Inflation — that is, less buying power as prices go up — is a key measure that affects all aspects of the economy.

Inflation more than doubled worldwide in the year since March 2021, according to the International Labour Organisation. In the eurozone, inflation reached 8.1% last month — a record high.

Yet inflation is predicted to hit lower-income countries even harder. While a recent outlook by the IMF projected inflation of 5.7% for industrialized countries, that figure for developing countries is 8.7%.

As if increased costs were not bad enough, experts are predicting that prices could remain high for years to come. 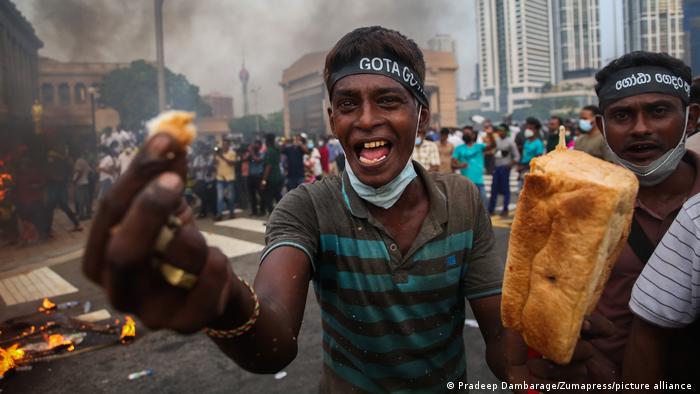 Prices for food have been soaring around the world, sparking protest like this one in Sri Lanka

Russia's invasion of Ukraine has left its mark on geopolitics as well. Some experts expect a renewed split into East and West geopolitical and economic blocs, with Russia and China on one side and the EU and US leading the other.

The North American Treaty Organization, also known as NATO, was founded after World War II in 1949 and brings together the US, Canada and 10 European countries. A child of the Cold War, it became something of an umbrella for democracy and free markets in Europe, with a major expansion to the east in 2004.

Key to NATO is Article 5, which spells out a principle of collective defense: If any member is attacked, this shall be considered an attack on all, with military retaliation to be meted out by each member.

While NATO's profile receded to the point that French President Emmanuel Macron in 2019 called it brain dead, the war in Ukraine is making the world's most powerful military alliance now take center stage, some observers say.

Due largely to fears over Putin's imperialist project for Russia, Finland and Sweden recently announced their intention to join the alliance, breaking nearly 70 years of neutrality.

Vladimir Putin sees NATO as a threat to Russia and has repeatedly warned of consequences, should the alliance allow Ukraine to join. Critics of the alliance say its eastern expansion amounted to a provocation.

NATO has been supplying Ukraine with weapons and equipment, although it has denied a request by Ukrainian President Volodymyr Zelenskyy to impose a no-fly zone over the country.

For now, NATO continues its delicate dance of remaining steadfast but treading lightly so that it will not trigger World War III.

Middle Eastern and North African countries rely heavily on wheat imports from Russia and Ukraine. The current war could lead to a severe food crisis in a region already under pressure.

DW fact check: Is hunger being used as a weapon in the Ukraine war?

Who is responsible for shuttered ports and mined maritime routes in the Black Sea? Are sanctions against Russia driving up global food prices? Can grain supplies from Ukraine be replaced? A DW fact check clarifies.

Poland under strain as Ukrainian refugees keep pouring in

Finland to apply for NATO membership