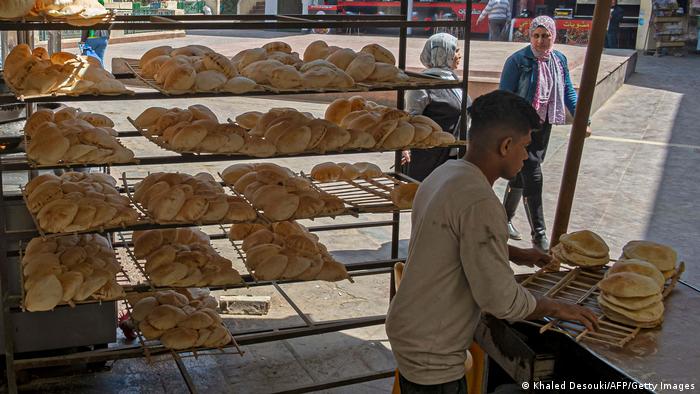 This week was a turbulent one for Egypt's 102 million people.

First, the government devalued the Egyptian pound by 14% against the US dollar after the war in Ukrainetriggered a hike in prices for wheat products and other foods. The devaluation was meant to counter pressure on the currency caused by foreign investors pulling billions of dollars out of Egypt's treasury markets.

Subsequently, to address the resulting spike in inflation, the central bank increased interest rates by 1%, citing "domestic inflationary pressures and increased pressure on the external balance."

Then, to counter the soaring prices for non-subsidized bread, Egyptian Prime Minister Mustafa Madbouly introduced a price cap for the next three months.

A 90-gram (3.2 US ounce) loaf will now be sold for 1 pound (€0.05, $0.05) at around 5,000 bakeries throughout the country, according to Abdullah Ghorab, head of the General Bakery Division of the Federation of Egyptian Industries.

By comparison, vendors sell subsidized bread for around 0.05 Egyptian pounds at about 30,000 bakeries, he told DW.

The government also announced an economic aid package worth 130 million pounds (€6.4 million, $7.05 million), acknowledging that the recent price hike has exacerbated the hardships faced by a population that was suffering from rising poverty, a contracting private sector and declining labor force participation even before the coronavirus pandemic hit.

Meanwhile, 30 million people live in poverty, and 70% of the population depends on food subsidy programs — above all for bread, a staple food that is usually consumed with every meal in Egypt.

The ubiquity of bread means wheat imports nearly doubling in price has hit the country particularly hard, but food insecurity does not appear to be an immediate threat.

"Egypt doesn't have an urgent supply problem, according to the government," Timothy Kaldas, a policy fellow at the Tahrir Institute for Middle East Policy, told DW. "They have enough wheat between local production and strategic reserves to cover their needs for the rest of the year."

But the country still needs to find a sustainable solution to replace the 80% of wheat imports from Ukraine and Russia.

"Importing wheat is essential for Egypt, as they cannot generate the amount themselves, and there are few other foods that provide the same number of calories and can be transported and stored," said Eckart Woertz, director of the GIGA Institute for Middle East Studies and a food security expert.

Woertz said he does not see any alternative for the Egyptian government to raising more money and finding substitute exporters, like India or the United States.

For the Egyptian government under President Abdel Fattah el-Sissi and Madbouly, focusing on food security could be the key to keeping the population calm and cooperative.

In Egypt, bread has been a particularly delicate topic for many decades. The word "eish" translates into three words: Bread, life, and livelihood.

In 2011, during the Arab Spring, a popular slogan at demonstrations that would eventually topple the military government of long-time Egyptian leader Hosni Mubarak was "bread, freedom and social justice."

Consequently, the recent surge in non-subsidized bread prices has led to unsettling memories.

"People ask me more often than before how much it costs," Hosni Mustafa, a seller of non-subsidized bread in Cairo, told DW.

So far, he hasn't seen people buying less bread, even though it costs more. "We still sell 2,000 pieces of bread per day since people have never held back despite inflated prices," he said. 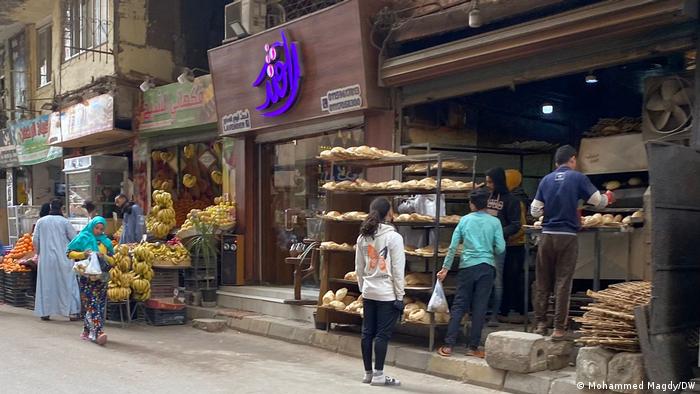 And yet, up until the price cap this week, prices were handled differently. "Vendors took advantage of the situation and raised prices on their own," 24-year-old Nour Mohamed told DW outside a small bakery in Cairo.

"We cannot live without bread," said 35-year-old Mohammad Sayed, a father of two sons. To make ends meet, Sayed has been working two jobs for a while, and his wife is working as a nurse.

But Sayed's family might have just become eligible for subsidized bread. "The government announced that it was adding 450,000 families to Takaful and Karama, which is their targeted cash assistance program for the poor," Timothy Kaldas told DW. "They also increased the exemption for income taxes and raised public servants' salaries and pensions."

Kaldas has no doubt that these measures are aimed at appeasing the population. "I think that they're trying to get ahead of the discontent that is likely to come with even further increases in the cost of living in a country that already has so many people living below the poverty line and very possibly will see more people fall below that poverty line in the coming year," he said.

On the other hand, such structural changes are obligatory when asking for international money, and as of this week, Egypt has applied for financial aid from the International Monetary Fund. 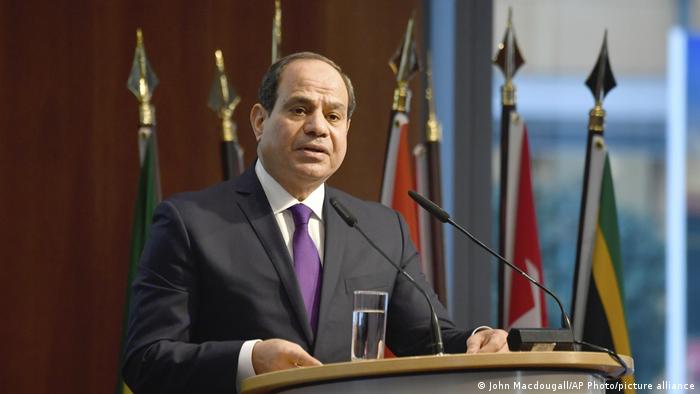 El-Sissi has applied for aid from the IMF, but experts accuse him of not distributing the money to benefit Egyptians

"The rapidly changing global environment and spillovers related to the war in Ukraine are posing important challenges for countries around the world, including Egypt. In that context, the Egyptian authorities have requested the International Monetary Fund's support to implement their comprehensive economic program," Celine Allard, the IMF's mission chief for Egypt, said in a statement on March 23.

However, Kaldas is not convinced that international money alone will solve the country's future problems.

"It's about the priorities and the proper allocation of public resources and making sure that more of them go towards serving the public and their interests as opposed to enriching regime elites, which has, unfortunately, been one of the priorities of this government for a number of years," he said.

Meanwhile, family father Mohamed Sayed still has to pay market prices for the food he puts on the table.