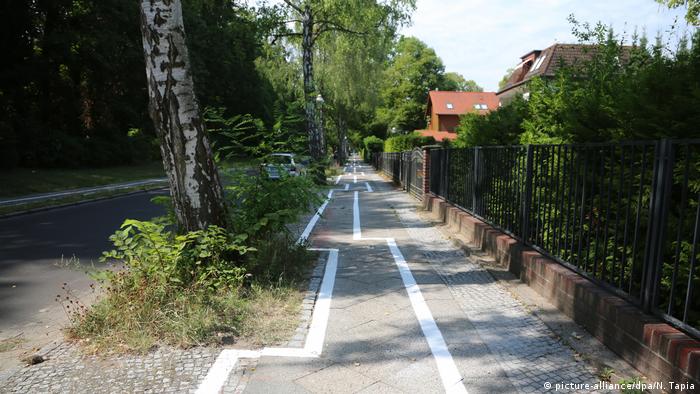 Maybe a zig-zag bike path in a Berlin district was intended as a joke or possibly some kind of hopscotch for bikes.

The bizarre bike lane markings running several hundred meters down Leo-Baeck-Strasse in the Zehlendorf district of Berlin have become a target of jokes on the internet. But the lane swerving at right angles to avoid trees has also raised the issue of bad planning in the German capital as it tries to be more bike friendly.

"It wasn't planned to be like this," said Maren Schellenberg, a city council member of the Zehlendorf district. Apparently, there was a communication problem with the contractor that painted the bike lane.

Now the lines must be redone, this time straight. "Actually, it is quite pretty, but there is no way it will stay like this," said Schellenberg.

There were jokes and criticism about mishap online.

One bike advocate showed a picture on Twitter of bike paths in London and Amsterdam compared to Berlin. "Berlin on its way to becoming the biking capital of Europe," he wrote.

Some locals laughed off the strange lines.

One main said that riding zig-zag could be "problematic at night."

Another said "it's pretty weird, but better than none."

A woman was more serious: "This is just too idiotic for my understanding."

The zig-zag lines running down the leafy middle-class neighborhood street comes as Berlin seeks to make the city more bike-friendly along the lines of Copenhagen and Amsterdam. Around 30 percent the traffic in those leading cities is accounted for by bikes, compared to 15 percent in the German capital.

Berlin plans to increase investment in expanded bike lanes, bike-friendly crossings and the building of other bike infrastructure in the next few years to battle pollution and traffic.

In July, Berlin passed a series of laws to prioritize environmentally friendly modes of transportation over cars.

The Road to a Bicycle-Friendly City

Every day, some 1.5 million cars try to navigate their way through the streets of Buenos Aires. But this is going to change, the bicycles are on the fast track. (14.06.2013)

The Dutch city of Utrecht is struggling to provide parking spaces for thousands of bicycle riders visiting the city's train station. The authorities have opened a new garage, projected to become the biggest in the world. (22.08.2017)