Youth revolts in Tunisia and Egypt could spread across North Africa | World | Breaking news and perspectives from around the globe | DW | 28.01.2011

In Tunisia, a popular uprising toppled a dictator for the first time in Arab history. Meanwhile, the largest protests in decades have broken out in Egypt. Could Morocco and Algeria be next? 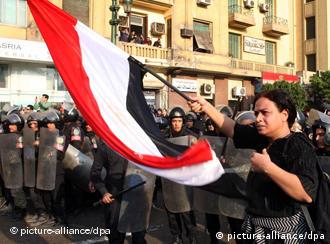 Popular uprisings that began in Tunisia have now spread to Egypt

Tunisia's revolution triggered shockwaves not just in Egypt. Throughout the Maghreb, authoritarian regimes like those in Morocco and Algeria have a difficult time addressing the frustration and despair of their young populations. However, it is questionable whether the revolutionary example set in Tunisia can take root among its neighbors.

The revolution began in the middle of December when a desperate, unemployed computer scientist named Mohamed Bouazizi set himself on fire in the small town of Sidi Bouzid. Bouazizi's death symbolized the despair of a generation, triggering a series of nationwide protests that ultimately swept longtime dictator President Ben Ali from power.

"We have 13 percent unemployment but the figures in the interior of the country are significantly higher, sometimes upwards of 70 percent," said Adelwahab El Hani, a Tunisian human rights lawyer from Sidi Bouzid. "80,000 Tunisians have just finished up with their studies and they need jobs. That's an enormous challenge for the government."

One Tunisian student said it was like the lid had shot off of a pressure cooker. He wasn't just alluding to his homeland, but to the entire Maghreb. In Morocco, half the population is under 25 years old and 40 percent of them do not have a steady job. Young academics are especially hard hit. The grumbling in the streets has become audible. Sure, there are limited political freedoms, women's rights, a parliament and a government - but no genuine democracy. The military and secret police are omnipresent. The social inequalities are extreme.

"Motives for these kinds of revolts are all over the Maghreb," said Francis Ghiles, from the Center for International Studies in Barcelona. "The elites in Morocco live the high life, but that doesn't guarantee social stability. The pie can't just belong to the rich. When there's no redistribution of wealth, when the upper class parades around arrogantly, then there will be revolt someday."

In Algeria it has already reached that point. This massive land is a social powder keg. In January there were casualties during protests against high grocery prices. In many Algerian cities, the young expressed their rage in a flurry of stones, tear gas grenades and Molotov cocktails. 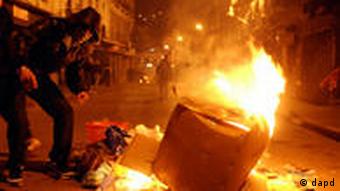 Algeria's government promised to take decisive action, but the country is politically stagnant. Longtime President Abdelaziz Bouteflika is supported by a corrupt clique of military officers and secret police. Three-fourths of Algerians are under 30. Most of them do not have jobs, apartments or perspective. All this despite the fact that the state coffers are full with money from oil and gas exports.

"This country has accumulated 150 billion euros ($203 billion) in foreign exchange," Ghiles said. "The problem is not a lack of money, but a clientele economy. It's a casino. There's no order, no plan, no perspective. And on top of that the government is autistic. Those in power just don't listen, they don't see the problems of their people, or they simply just don't want to see."

But now they have to see. A growing number of desperate, well-educated young people are dousing themselves in gasoline and lighting themselves on fire: In Egypt, in Yemen, in Mauretania and also in Algeria. Just like Mohamed Bouazizi in Tunisia, whose final act of self-determination set a whole country in flames.

Ghiles believes that the so called "Jasmine Revolution" in Tunisia is a historic event that has shaken the entire Maghreb. However, he does not believe that it will set off a domino effect which topples the region's other authoritarian regimes. The Moroccan King Mohammed VI has a broad power base and his role as the highest religious leader of the Moroccan people lends him additional legitimacy. 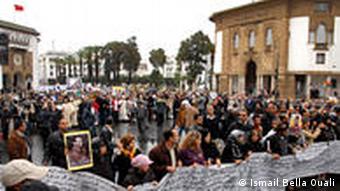 Protests have gripped Morocco in the past. But King Mohammed VI's broad power base keeps him in power.

In Algeria the middle class, which played a critical role in Tunisia, has largely disappeared. There has been social unrest for years, but the regime has never been seriously threatened. The military and secret police are so tightly connected with the halls of power and the oil and natural gas industries that they have too much to lose in a revolution.

In stark contrast to Tunisia, Ghiles has no doubt that the Algerian army would gun down demonstrators. And nobody wants a new civil war in Algeria - the last one cost 200,000 lives. Even if the states of the Maghreb do not fall like dominos, Tunisia serves as a warning.

"When these kinds of events repeat themselves, like recently in Algeria or a few years ago in Morocco, or even in Tunisia or Egypt, then governments have to draw some conclusions," Ghiles said. "If they don't do that, then the pressure cook will explode - just somewhat later."

Renewed protests in Algeria and Tunisia as Arab unrest spreads

Protests continued in Algeria and Yemen on Saturday as Tunisia's old regime faced mounting pressure to quit. Demonstrators in Tunis were joined by hundreds of police officers. (22.01.2011)

Three days of mourning have begun in Tunisia to remember the victims of the popular uprising that toppled former President Ben Ali. The mourning period is for the 78 people killed during protests. (20.01.2011)