Protests in Egypt continue despite government shut down of Internet | Science | In-depth reporting on science and technology | DW | 28.01.2011

Early on Friday, the Egyptian government took steps to shut down Internet connectivity, with reports of telephone networks also being denied. Despite these measures, reports of protests continued in Cairo. 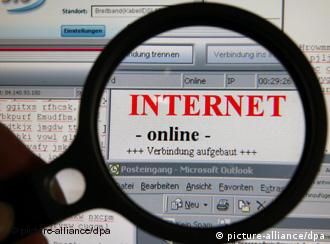 The Egyptian government ordered ISPs to shut down

On Friday, Egyptians woke up to discover that they no longer had access to the Internet, thanks to the government which had apparently ordered internet service providers (ISPs) to cease international connections.

Though one ISP was left operating on Friday, James Cowie of the US-based Internet analysis firm Renesys reported on its blog that "virtually all of Egypt's Internet addresses are now unreachable, worldwide."

However, by Tuesday morning, February 1, the remaining ISP, Noor, went offline as well.

While there have been Internet slowdowns, and the temporary removal of a China province from the Internet, only on a few occasions has a country been temporarily taken completely offline - Nepal in 2005 and Burma in 2007.

"What happens when you disconnect a modern economy and 80 million people from the Internet?" Cowie wrote. "What will happen tomorrow, on the streets and in the credit markets?"

During the 2009 protests in Iran, access to the Internet was throttled, and some cell towers were disabled, but the entire country never vanished from cyberspace as Egypt virtually did on Friday.

Additionally, the government has ordered mobile phone providers to cease operation, as Vodaphone Egypt reported in a statement on its website.

"All mobile operators in Egypt have been instructed to suspend services in selected areas," the company said in the statement.

"Under Egyptian legislation the authorities have the right to issue such an order and we are obliged to comply with it. The Egyptian authorities will be clarifying the situation in due course." 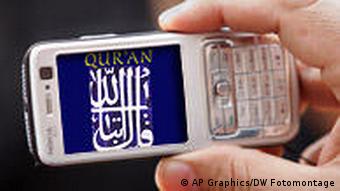 Mobile phone networks have also been suspended by government order

The ramifications outside of Egypt are troubling as activists and journalists struggled to understand the situation there, as Ammar Abdulhamid, a Syrian dissident and human rights activist in the United States, told Deutsche Welle.

"The Internet, and the Tunisian precedent made the world take notice of events in Egypt from day one, whereas it took months for them to notice the importance of developments in Tunisia, but even there, the Internet played a crucial factor," he said.

"The fact that Egyptian authorities are doing their best to cut off communications and access to the Internet demonstrates its importance from their perspective."

'Reverting back to Protest 1.0'

But on the streets of Cairo, the lack of communication presents more immediate problems according to Abdulhamid.

"The value of the Internet and mobile technology was and is to facilitate direct real-time communications between activists themselves in the first place," Abdulhamid told Deutsche Welle. "Communicating with outside supporters comes second."

However, beyond coordinating protests, other experts said the inability of protesters to quickly communicate via SMS could lead to more injuries.

"One thing people use SMS for is to tell other people when they see police and to get out of harm's way, and so more people will end up being injured," said Robert Guerra, director of the Internet Freedom Project at Freedom House, an American advocacy organization.

"We're reverting back to Protest 1.0," he told Deutsche Welle. "These are people who are accustomed to tech, we'll have to see how they react." 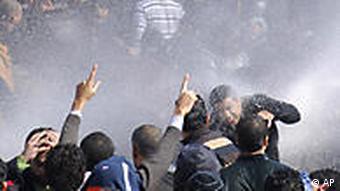 Despite the lack of technology, protests continued in Cairo on Friday

According to the Twitter feed of Diaa Hadid, a reporter with the Associated Press in Cairo, the protests have continued unabated.

Apparently, the protesters harnessed other social, non-technological methods of organization, according to Guerra, by gathering at mosques to issue a call to organize.

Especially since the June 2009 protests in Iran, many in the foreign policy and online intelligensia world have continually debated what role the Internet plays in prompting democratic change around the globe.

Evgeny Morozov, a Belarus-born journalist, argues in a new book published earlier this month, "The Net Delusion: The Dark Side of Internet Freedom," that there isn't such a clear causal line between online tools and democratic change.

"There's an assumption that the moment that we give information and facts to Russians, Chinese, Iranians and Vietnamese about how bad their governments are, that these people will immediately start going out on the street and protesting," he told Deutsche Welle in an interview earlier this month.

"There's this assumption that information is power. Much of this is a myth simply because most people already know how bad their governments are."

Still, some disagree with Morozov, most notably Clay Shirky, an American author who has written extensively on the Internet and recently published a piece in Foreign Affairs, extolling the virtues of social media and technology in organizing revolutions.

On Friday morning, he wrote the following bittersweet message of vindication on Twitter:

"[The] best reason to believe digital media improves public coordination is that the autocrats believe that."

The violent protests that have rocked Egypt have also rattled President Hosni Mubarak's regime. Could Mohamed ElBaradei's return be the galvanizing force to form a cohesive leadership which could push for real change? (28.01.2011)