Renewed protests in Algeria and Tunisia as Arab unrest spreads | World| Breaking news and perspectives from around the globe | DW | 22.01.2011

Renewed protests in Algeria and Tunisia as Arab unrest spreads

Protests continued in Algeria and Yemen on Saturday as Tunisia's old regime faced mounting pressure to quit. Demonstrators in Tunis were joined by hundreds of police officers. 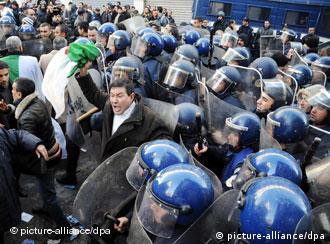 Protestors in Algeria clashed with police

Police clashed with pro-democracy protesters in the Algerian capital Algiers on Saturday, leaving multiple casualties, as they blocked a march on parliament that had fueled fears of Tunisia-style unrest.

The opposition said at least 42 people had been injured during the clashes, including two seriously. The Interior Ministry put the number of injured at 19, including 11 protestors or passers-by, and eight police.

Said Sadi, the head of the opposition Rally for Culture and Democracy (RCD), said the protest was organized in defiance of a government ban.

Around 300 people had gathered for the rally, intending to march from the city's Place de la Concorde to the parliament building, but they were quickly blockaded by police armed with batons and tear gas, which prevented the group from moving for six hours before it dispersed.

The Algerian League for the Defense of Human Rights (LADDH) said Saturday the blanket government ban on peaceful protest could cause social upheaval in the North African country.

"The fact of banning peaceful marches undertaken by the parties and civil society is leading us towards an explosion," the group's president Mostefa Bouchachi told the AFP news agency. 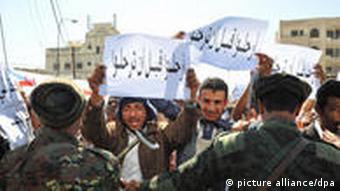 As unrest continued to simmer in Algeria, hundreds of Yemeni students held protests at Sanaa University, with some calling for the president to step down, and others for him to stay in office.

Protesters have frequently called for an end to President Ali Abdullah Saleh's decades-long rule since the Tunisian uprising.

"No to inheritance, no to extension, learn from the Jasmine Revolution," read a banner carried by the students, in reference to the events in Tunisia that have become known by that name.

Saleh was reelected in September 2006 for a seven-year mandate. A draft amendment of the constitution, under discussion in parliament despite opposition protests, could further stretch his tenure by allowing a lifelong mandate.

In Egypt, a national day of action is scheduled for next Tuesday by opponents of the 29-year regime led by President Hosni Mubarak.

"If the Tunisians have done it, Egyptians should get there too," Mohammed ElBaradei, a leading opposition figure and 2005 Nobel Peace Prize winner, told German news magazine Der Spiegel for an interview to be published Monday. 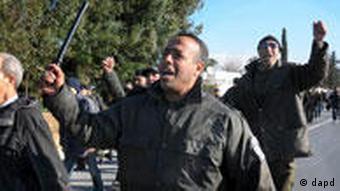 Meanwhile, in Tunisia interim Prime Minister Mohamed Ghannouchi hosted cabinet meetings at his office in the capital, Tunis, on Saturday.

Thousands of people rallied, calling on their new government to quit because of its inclusion of old regime figures in key posts, including Ghannouchi as well as the defense, interior and foreign ministers.

It comes in the midst of a three-day mourning period for scores killed in the popular revolt that toppled the regime.

Demonstrators in Tunis were joined by hundreds of police officers, who said they were not responsible for the bloody crackdown against protests that ultimately led to the ousting of President Zine El Abidine Ben Ali.

Some of the officers briefly blocked a car carrying interim President Foued Mebazaa, the speaker of parliament, but it was later allowed to pass.

Public assemblies of more than three people are officially banned under a state of emergency that remains in place along with a nighttime curfew.

Also Saturday, a protest march backed by the main UGTT trade union, which has played an instrumental role in the recent upheaval, set off from central Tunisia headed for the capital with hundreds of local residents taking part in a bid to topple the interim government .

The demonstrators called their protest a "Caravan of Liberation" and spent their first night in the town of Regueb, 265 kilometers south of Tunis, and said their march would gain momentum as it moved toward the capital.

Tunisia's prime minister vows to step aside after vote

Tunisia's interim prime minister has promised to quit politics in a bid to appease protesters who are demanding that the old regime leave a coalition formed after the overthrow of the president. (22.01.2011)