Demonstrations in Libya and Jordan put Tunisian model to the test | World| Breaking news and perspectives from around the globe | DW | 17.01.2011

The protests in Libya against corruption throw up the question whether the Tunisian crisis heralds the beginning of the end for autocratic Arab leaders. The West is encouraged and is hoping for lasting change. 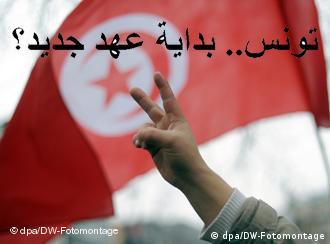 Protests are reverberating across the Arab world

The specter of authoritarian regimes falling like dominoes may however be overly optimistic. While there is no doubt that developments in Tunisia have emboldened the discontent across a swath of land stretching from Morocco to the Gulf, it remains to be seen, according to analysts, whether protestors in other Arab countries have the wherewithal to sustain demonstrations and casualties for weeks and to what degree Arab governments have learnt lessons from the Tunisian experience.

Demonstrations in Algeria subsided last week after authorities moved to roll back increases in prices of commodities. Protestors in Jordan have yet to show that they are cut from the same cloth as their counterparts in Tunisia.

Protests in Libya erupted three days ago, but have so far largely gone unnoticed by the international media with the exception of a few reports in the Arab press as well as statements and videos circulated on the Internet by Libyan opposition groups. The Libyan opposition website Almanara reported that demonstrators had clashed with security forces in the town of Al Bayda, 800 kilometers (500 milies) east of Tripoli, after throwing stones at government offices in the town and setting a government office on fire. The protesters were demanding "decent housing and a dignified life," Almanara said.

Libyan activists and opposition groups reported that hundreds of people had also occupied some 600 empty apartments in Beghazi, Libya's second largest city, and 800 units in Bani Walid, southeast of Tripoli. The activists said the squatters had been expecting to move into new homes promised to them under a government housing scheme, but had seen apartments they had already paid for awarded to others.

"Bani Walid has no basic services; thousands of people are without houses and the local authority is corrupted, it only delivers services with bribes. Nothing will make Bani Walid calm but freedom, justice and transparency," the opposition National Front for the Salvation of Libya said in a statement on its website. The Front reported that the lawyers in Benghazi were joining the protests of the squatters.

Lessons to be learned? 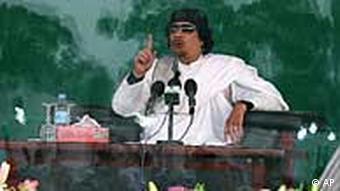 Libyan leader Col. Moammar Gaddafi appears to have drawn a lesson from President Zine El Abidine Ben Ali's failed handling of the protests in Tunisia, ordering police to avoid clashes with demonstrators while protecting government buildings. The country's Revolutionary Council said in a statement that it would investigate the complaints and promised that "all the problems will be solved soon through the legitimate authorities."

At the same time, however, Gaddafi true to his idiosyncratic eccentrism, voiced what other leaders probably believe but have kept to themselves. Describing the departure of Ben Ali as "a great loss" for Tunisia, the Libyan leader said he still considered Ben Ali the country's constitutional leader.

The United States and the European Union have so far responded cautiously to the wave of protests in the Arab world, fearing that the unrest could destabilize the volatile region and bring anti-Western forces to power. "The European Union has an interest in keeping a strong partnership. This is why countries including France, Spain and Italy have not clearly condemned what happened," Ivan Ureta, a professor of international relations at King's College in London, told Deutsche Welle.

A key concern for the US and the EU is that the protests in most Arab countries like Libya and Jordan, where thousands demonstrated over the weekend against government economic policies and called for the resignation of Prime Minister Samir Rifai, are backed by Islamist opposition forces.

"As in all cases of revolution, you must be careful what you wish for. The politics and demographics in these countries mean that what replaces the corrupt old regimes could be even worse; strengthening the hands of terrorists and radicals," Mark Almond, a visiting professor in international relations at Ankara’s Bilkent University, told Deutsche Welle. 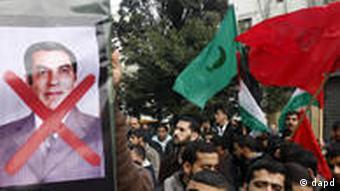 Tunisians may have brought about real change in their country

Analysts note that the absence of Islamists in the Tunisian protests is because Tunisia, unlike other Arab countries, has since its independence aggressively sought to ban Islamists from public life.

"Most influential Tunisian Islamists now live abroad, while those who remain in Tunisia have been forced to form a coalition with unlikely secular and communist bedfellows. The nature of the opposition and the willingness of the Tunisian government to back down are not coincidental. If it had been clear that Islamist opposition figures were playing a large role in the current unrest, the government would likely have doubled down on repressive measures," says Michael Koplow, a doctoral candidate at Georgetown University, in a commentary in Foreign Policy.

Islamists are nonetheless certain to exploit the widespread discontent and may benefit once protestors realize that change involves a lot more than toppling a corrupt and authoritarian leader. Ben Ali's departure has thrown Tunisia into turmoil. The country, at least for now has lost tourism, one of its main sources of foreign income. With the evacuation of thousands of European tourists, it will be some time before Tunisian tourism regains lost ground.

The rise of secularism

In a first sign of the reemergence of the Islamists, Rached Ghannouchi, the 69-year old leader of Tunisia's banned Nahda or Renaissance movement, announced on Sunday that he was returning to Tunisia from his 22 years in exile in London.

Analysts say that Ghannouchi will encounter a country very different from the one he left. While he still may have supporters in Tunisia, he does not have an infrastructure and many of those Islamists that remained in the country have radicalized and are likely to see Ghannouchi as a spent force too willing to compromise.

More importantly however, Tunisia's long-standing suppression of the Islamists has allowed secularism to build roots that many Tunisians will want to preserve. Tunisian-born Israeli sociologist Claude Sitbon notes that Tunisians on the Internet joked that Ghannouchi would be met at the airport by bikini-clad women. "Women have achieved an amazing status in Tunisia. They wear jeans in the street and bikinis on the beach; women are judges and ambassadors. Tunisians won't want to lose that," Sitbon says.

All ministers in Tunisia's interim government have quit the party of ousted President Ben Ali following demands that it be dissolved. Relatives of Ben Ali have also been arrested for possessing state assets. (20.01.2011)

Protests set stage for change in Mideast and North Africa

A wave of protests across the Arab world against economic mismanagement, unemployment, and corruption as well as the likely partition of Sudan could set the stage for the redrawing of the political map in the region. (14.01.2011)