The leaders of China, Germany, France and the EU have held "unprecedented" talks on building a new global governance. The challenge for Europe is how to balance ties in the face of Beijing's growing global influence. 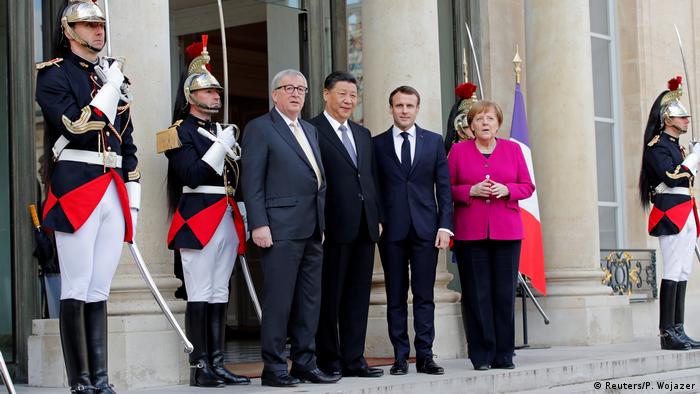 The French government billed the encounter, on the third and last day of Xi's state visit, as a "high-level meeting on the challenges of multilateralism."

Macron urged his Chinese counterpart to "respect the unity of the European Union and the values it carries in the world."

Both Xi and Macron talked up the virtues of multilateralism.

"We would like to make progress renovating multilateralism. We have divergences, obviously in the history of humanity power does not go without rivalry, none of us are naive," Macron said.

A prosperous Europe corresponded with China's "vision for a multipolar world," Xi said, adding that the EU and China were "advancing together" despite "suspicions."

'Competition among us is a good thing'

All the leaders stressed the need for cooperation between the EU and China at a press conference following the talks, with Macron thanking the Chinese president for his continuing support to counter climate change.

The four leaders mentioned the need to reform the World Trade Organization, to make it more responsive.

Merkel said the EU "wants to have a role in the Silk Road initiative," despite there being few details at present. She was referring to the Belt and Road Initiative, which aims to link China by sea and land with Southeast and Central Asia, the Middle East, Europe and Africa, through an infrastructure network along the lines of the old Silk Road.

Merkel also noted that the EU is watching with great interest the trade negotiations between the US and China, because if the negotiations failed it would have an impact on Germany and the EU.

Juncker said the EU and China can do great things together, but they should do so in a cooperative way. He acknowledged that the EU and China were competitors and rivals, but that "competition among us is a good thing."

He also emphasized that EU companies must have the same access to Chinese markets as Chinese companies have to the EU.

China and France announced a dozen business deals on Monday, including agreements on nuclear power, cultural exchanges and clean energy, while Beijing also committed to buying 290 Airbus A320s and 10 A350 airliners from European aircraft manufacturer Airbus.

The order, originally for 184 A320s for 13 Chinese airlines, was first announced during Macron's state visit to China in January 2018.

All of the deals, including one on French exports to China of frozen chicken, amount to a total of some $40 billion (€35.4 billion).

China and Europe should have an economic and trade relationship "built on a fair and balanced framework," Macron said.

Earlier on his trip, Xi visited Italy, which became the first G7 state to sign up to China's vast Belt and Road Initiative, sparking unease in the US and the European Union. Macron announced that France and China will cooperate on a number of investment projects in some of the countries involved in the initiative.

Italy's participation comes despite misgivings over the huge venture by other European nations wary of China's growing influence.

Despite a number of sources of friction, France wants to engage China as a closer partner as Washington becomes more isolationist under Trump's "America First" policy.

A full China-EU summit is due to take place in Brussels on April 9.

As a big exporter of goods, Germany is dependent on efficient infrastructure. Therefore, it's little surprise that China's new Silk Road project is also seen as important in Berlin. But too many questions remain open. (17.07.2017)