As a big exporter of goods, Germany is dependent on efficient infrastructure. Therefore, it's little surprise that China's new Silk Road project is also seen as important in Berlin. But too many questions remain open. 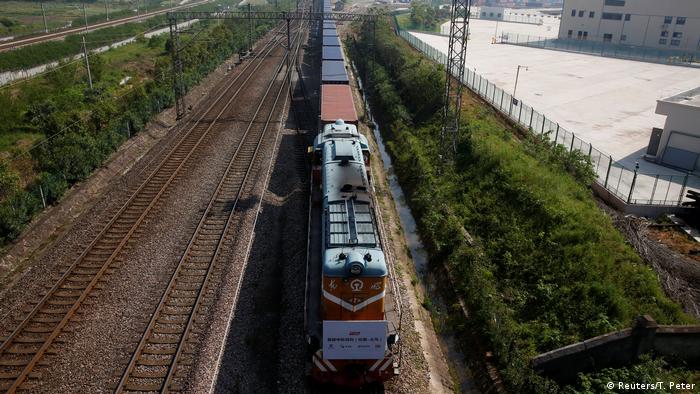 The Silk Road is a German invention. At least the name is, anyway. It largely goes back to German researcher Ferdinand von Richtholfen, who referred to it as a historical network of caravan routes which linked the Mediterranen by land via Central Asia to East Asia in the 19th century. Richtholfen's name soon became immensely popular.

In 2013, the Chinese government used the well-known label to promote its new infrastructure project, the "One Belt, One Road" initiative. The Silk Road of modern times is an ambitious and coordinated project planned from Beijing, which will connect China on land and sea with Europe, Africa, the Middle East and South, Central and Southeast Asia. 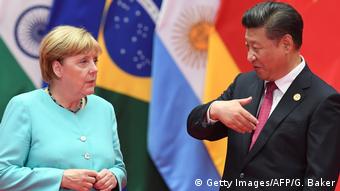 When the first information on the Chinese project became public in 2013, many German entrepreneurs initially didn't know what to make of it.

"My perception was that the initiative has only really come to companies in 2015 when the Asian Infrastructure Investment Bank (AIB) was founded," said Daniel Müller from the East Asian Association (OAV) in Hamburg, which represents 500 German companies active in the Asia-Pacific region.

Backed by China's government, the AIB, in which Germany holds a stake of $4.5 billion (3.9 billion euros), is an important building block for the expansion of infrastructure in Asia. Only the eventual founding of the bank demonstrated China's intent to invest money into the project. This mood was also reflected by German entrepreneuers, who were convinced that "something big" was happening and that they should definitely be present.

But there are a number of open questions regarding the Silk Road project. Is China's initiative really a targeted and coordinated plan? Or is it rather a conglomerate of different individual initiatives, all of which were assigned the name "New Silk Road"? "This is the latter, in my view," said Müller. And as diverse as the various projects are, the direction and impact of the overall strategy is so far inscrutable and unclear.

For Müller, the central key words are transparency, inclusion and sustainability. "There are proven international standards and you shouldn't deviate from them in order to achieve short-term economic gains," he explained. But the standards shown at the Beijing Silk Road Conference in May were bitterly disappointing. The objective must be a genuine multilateral coordination among the main protagonists.

"Germany is open to cooperation, we want to create meaningful synergies between European and Chinese approaches, but we are also committed to our principles," said Ina Lepel, head of the newly-established Asia-Pacific department within the German Foreign Ministry.

"The prerequisites for our participation are that internationally recognized regulations, as well as environmental, work and social standards are respected. The projects must also be sustainable in economic, ecological and socio-economic terms. We are not naive: of course, infrastructure expansion alone is not a guarantee for successful development processes," she added.

Only for the big players

Thus far, only a few German companies have implemented concrete steps to participate in China's new Silk Road. One of them is Deutsche Bank, which has ploughed three billion dollars into the Chinese Development Bank, and aims to boost the economic cooperation between China and Germany, within the framework of the new initiative.

Duisburg Port, the largest inland port in the world, has positioned itself as an important and strategic endpoint to the Silk Road. Now already 24 trains from the Far East are unloaded there every week. Meanwhile, Deutsche Bahn, Germany's publicly-owned rail company, plans to expand its activities in China. In June 2016, an agreement on cooperation was signed between China Railway Corporation and Deutsche Bahn, which strives for further progress in the development of infrastructure. 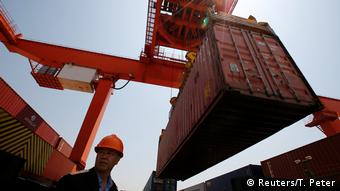 The Silk Road is connecting China with London and Europe

According to Müller's assessment, the Silk Road initiative is currently very attractive to leading German companies. But such a megaproject, where there are many uncertainties that involve several unstable countries and regions, is very challenging for small and medium-sized businesses, which cannot mitigate the risk of poor investments. Experience counts, too, to be successful in such a complex and ambiguous situation.

Müller says it's an indication that the project is not yet sufficiently advanced enough to be attractive to the private sector given that there are practically no private investors committed. The German government is convinced that German companies could contribute a lot to the project.

However, they are hesitant because the conditions aren't always fair. China seals off certain areas of its economy, but the Germans are trying to change that mindset, says Lebel. "We are therefore persistently working on China to improve its market access for non-Chinese companies, such as through open and transparent tenders and tendering procedures, which is a requirement of fairness."

The first freight train linking China directly to the UK has arrived in the eastern Chinese city of Yiwu. It is part of China's drive to strengthen trade links with western Europe along a modern-day 'Silk Road.' (29.04.2017)