The first freight train from China to Britain has arrived in London, completing a journey across Asia and Europe. The service is part of a push by China to revive the Silk Road trading routes to western Europe. 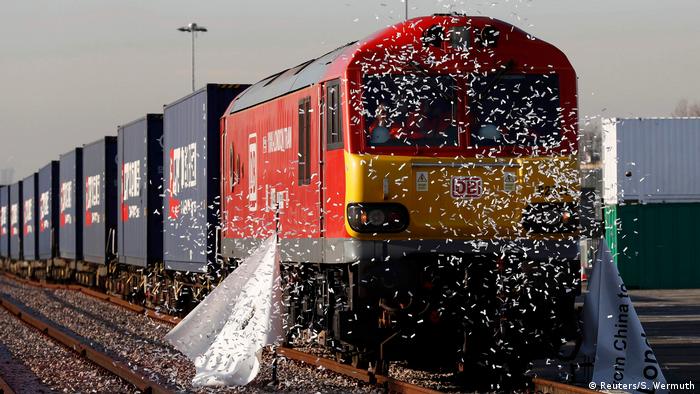 The red locomotive hauling the train was showered with white confetti as it rolled into the Barking terminal in east London on Wednesday.

The train began its intercontinental journey in the eastern Chinese city of Yiwu on January 1. It then passed through Kazakhstan, Russia, Belarus, Poland, Germany, Belgium and France before entering Britain through the English Channel.

The train is operated by the InterRail Group, a transport operator headquartered in Switzerland, on behalf of CRIMT, a subsidiary of state-owned China Railway Corporation.

Various freight railways are responsible for traction along the route. DB Cargo, the freight division of Germany's main railway Deutsche Bahn, operates the section from Duisburg to London.

The train was transporting dozens of shipping containers filled with clothing and other retail goods. It covered 12,000 kilometers (7,500 miles) on the 18-day trip.

While the rail route takes half the time of the journey by sea, it is hampered by two breaks of gauge along the route. China and Europe use standard-gauge tracks, with the rails 1,435 millimeters apart, while Russia, Belarus and Kazakhstan use the wider Russian gauge of 1,520 millimeters, requiring the cargo to be reloaded each time.

Britain as a final destination poses another set of problems, as railways there have a smaller loading gauge - the clearances around the rail vehicles - than the rest of the route, restricting the size of the shipping containers that may be used.

For now, the London route is being evaluated as a test. The initiative is part of China's efforts to strengthen trade links throughout Asia, Russia and Europe along a modern-day Silk Road.

China Railway already has freight services to other European destinations, such as Madrid and Hamburg. London is the 15th city to be linked to the new network, which is being billed as faster than shipping and cheaper than air transport.

From roads in Montenegro to industrial parks in Poland, China has become one of the biggest investors in eastern and southeastern Europe. The Beijing-led "16+1" initiative promises to boost cooperation with the region. (05.11.2016)

An important element of Chinese foreign policy is the Silk Road initiative, which is supposed to realize the "Chinese dream," and make China one of the world’s leading nations. But there are many misgivings. (21.12.2015)