US President Joe Biden's generous coronavirus relief package, to the tune of $1.9 trillion, has economists worried it will drive up prices and wreak havoc on the economy. 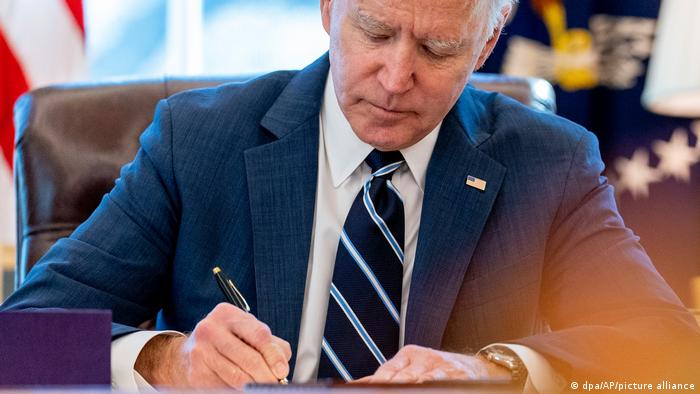 US President Joe Biden on Thursday signed into law a $1.9 trillion (€1.6 trillion) coronavirus relief package bill, following its approval by Congress. One of the largest US federal aid packages since the Great Depression in the 1920s, the bill includes, among other things, funds earmarked to help schools reopen, to speed along vaccine production and distribution, and to help struggling state and local governments. It also provides $400 billion in direct payments of $1,400 each to most Americans and extra provisions for low-income families, including adjustments to a child tax credit that increases it from $2,000 to as much as $3,600 per child per year.

Opponents of the package, which included all Republican members of Congress, accused the bill of being a Trojan Horse used by Democrats to usher in partisan priorities under the guise of pandemic relief.

But Republican lawmakers haven't been the only ones to raise concerns. The sheer magnitude of the fund has prompted lively discussions within economic and political circles about whether it is too large for its own good, and whether inflation is now in the cards.

The economy on 'fire'

"I agree that too much is better than too little and we should aim for some overheating. The question is how much," economist and former chief economist for the International Monetary Fund Olivier Blanchard wrote on Twitter in February, responding to the proposed bill. "Much too much is both possible and harmful. I think this package is too much."

"This would not be overheating; it would be starting a fire," he wrote.

Over the last decade, the rate of inflation in the US has only occasionally gone above the Federal Reserve's target of 2%. For anyone born after 1960, it might be difficult to imagine what a US ravaged by exploding consumer prices might look like. But in the 1970s, overly loose monetary policy, the introduction of wage and price controls, and a series of energy crises pushed the inflation rate into the double digits and plunged the US into a painful recession.

"There's a real possibility that within the year, we're going to be dealing with the most serious incipient inflation problem that we have faced in the last 40 years," former US Treasury Secretary Larry Summers told Bloomberg News in February.

Unbridled inflation is bad enough on its own terms. But it's also self-perpetuating. The faster people try to spend their depreciating money, the quicker it will lose value. If this were to happen in the US, the Fed would have to step in and consciously inflict pain on the economy. This would take the form of higher interest rates meant to increase unemployment, forcing a stop to the spending frenzy on the most unpleasant terms.

How low can you go?

So is this stimulus package an instance of robbing the future for the sake of the present? A widely agreed upon answer seems to be: maybe. Inflation could happen, and such a generous relief package would have been very unlikely to pass in the 1980s, when the horrors of inflation were still fresh in everyone's minds.

But it's 2021 and right now the horrors of the pandemic appear much more pressing. The Biden administration has opted to treat the problem in front of it and to deal with consequences as they come. "The risk of doing too little to help American families outweighed the risk of doing too much," White House Press Secretary Jen Psaki said in a press briefing on Tuesday. "That said, we will always be carefully monitoring inflation, and we will continue to do so going forward."

If inflation is the result, that might not be the worst thing.

For decades now, the inflation rate in the US has been more often too low than too high, falling short of the Fed's target of 2%. This target exists to encourage people to invest their money rather than sit on it, and to give the central bank room to act in the case of an economic crisis by raising or lowering interest rates. The Fed can adjust federal interest rates to try to achieve its target inflation.

Since 2019, the Fed has slowly lowered interest rates in an attempt to stimulate economic activity, starting from rates which had already been quite low in the wake of the 2008 financial crisis. With interest rates currently between 0% and 0.25%, and the rate of inflation at 1.7% as of February, the Fed is essentially out of options when it comes to stimulating the economy and impacting inflation.

If this continues in the long term, it can have repercussions on economic decisions people make in their day-to-day lives. If the actual rate of inflation is consistently below the Fed’s target, an aimed for future 2% inflation rate is not going to be a factor in the salary negotiations of employees and unions and the borrowing decisions of home buyers. Why push for, or accept, a salary increase that hedges against 2% inflation when inflation never actually hits that mark?

The bright side of inflation

A healthy level of inflation could also usher in the return of a more stable investment environment. Low interest rates have pushed investors into increasingly speculative ventures, like bitcoin and digital daytrading, which some have criticized for being detached from the real economy. Now the government is issuing a significant amount of new debt to fund concrete projects. This could pull dollars back into the real economy.

As for the risk of overly high inflation, Biden and his Democrats seem to be opting for the devil they know over the one they don't. The pandemic presents an unprecedented challenge on almost every front, whether politically, economically, or in terms of public health. Inflation has happened before, and there are tools, experts and theories waiting in the wing to rein it in if necessary.

And it might not be. Fed Chairman Jerome Powell has said he expects upward pressure on prices in the coming months, but nothing long-lasting that would require action from the central bank. Others agree.

The economic landscape of the last decade — characterized by sluggish growth despite low interest rates — has led many experts to question what we thought we knew about fiscal policy. So while the effect of the Biden administration’s $1.9 billion relief package may not yet be foreseeable, it's clear that, however it turns out, it  will be one for the textbooks.

The Fed added 0.75% to its benchmark interest rate for a second straight time. The increase of the interest rate to its highest level in four years comes as inflation continues to reach new heights.

Inflation in the US sent prices for gas, food and rent surging in the fastest rate since 1981. The pressure on US households is likely to lead to the Federal Reserve hiking interest rates again.