Joe Biden wants to spend $1.9 trillion on a relief program aimed at curbing the COVID-19 pandemic and the economic crisis it has caused in the US. DW explains what the funding is intended for and how quickly it can flow. 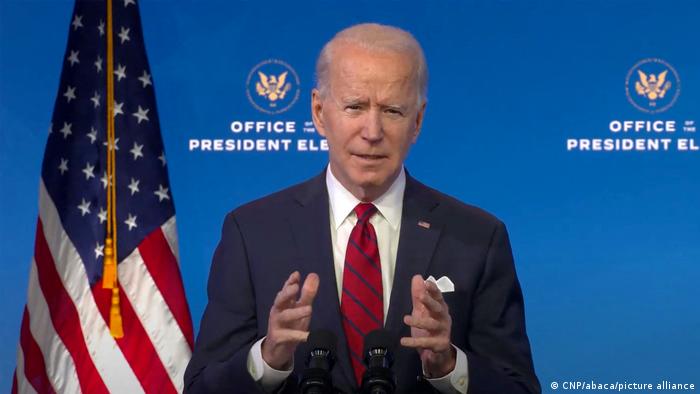 The new US president's government-funded aid package, billed as the American Rescue Plan, is intended to pump money into the US economy as well as bolster vaccination and testing efforts. It comes at a time when deaths from the virus pandemic have hit record levels and unemployment claims are surging amid fresh lockdowns imposed by local governments.

"There's no time to waste," Biden said when he unveiled his plan last week, adding: "We have to act and we have to act now."

As Biden's Democratic Party controls both chambers of Congress and the White House, the president is proposing relief totaling $1.9 trillion (€1.57 trillion), which, if enacted, would rival the $2 trillion in state support earmarked by Congress in March 2020 under the so-called Cares Act. It follows a $900 billion relief package in December, which was scaled back to win support of the Trump administration and Senate Republicans.

Here is a breakdown of what Joe Biden is proposing.

Under immediate measures to curb the spread of the coronavirus, some $20 billion would be earmarked for a national vaccine distribution program aimed at offering free inoculations to all US residents regardless of their immigration status.

Community vaccination centers are planned to be established with mobile units that would bring vaccines to remote areas that are difficult to reach. Moreover, Biden is calling for funding to the tune of $50 billion to improve nationwide testing efforts, including purchasing rapid-result tests, expanding lab capacity and helping local jurisdictions implement testing regimens.

Aiming to stimulate public consumption, Americans would be eligible to receiving $2,000 in direct government payments — a central promise of Biden's campaign for the presidency. Payments would for the first time extend to people who are married to undocumented residents.

In December, Congress agreed on $600 in direct payments for individuals, which Biden said wasn't enough in relief to "people who need it the most."

The US's existing moratorium on evictions and foreclosures, which expires on January 31, is planned to be extended until September 30, with people owning federally guaranteed mortgages allowed to apply for forbearance within the period.

Furthermore, the proposal envisages $30 billion in rental and utility assistance for those struggling to pay bills, including $5 billion to states and local communities to offer emergency housing for families facing homelessness. 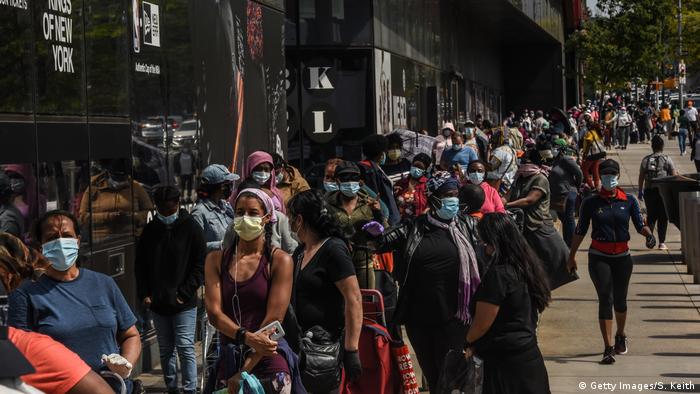 Biden also wants to extend the 15% increase in food stamp benefits through September — this would have expired in June. Another $3 billion are earmarked to help women, infants and children secure food and to give US territories $1 billion in nutrition assistance. There are also plans for US state governments to partner with restaurants to provide food to needy Americans and jobs to unemployed restaurant workers.

Benefits for the jobless would be extended and enlarged during the pandemic. The proposal increases a weekly federal benefit to $400 from $300 and extends it through the end of September. In the December package, lawmakers provided only an additional 11 weeks of support.

The unemployment benefits are now planned to be expanded to cover self-employed individuals and gig workers, and those who have exhausted their regular jobless benefits. 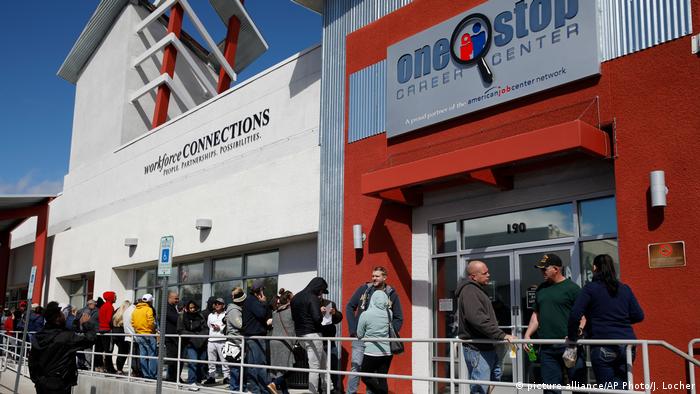 New applications for unemployment benefits rose by 181,000 in the first week of 2021 —the biggest increase since the coronavirus pandemic began in March

Biden also wants to more than double the federal minimum wage to $15 an hour from $7.25 currently. In addition, he seeks to end the tipped minimum wage of $2.13 used widely by restaurants and the hospitality industry for employees who rely on tips for much of their income.

The Biden plan would create a requirement for employers to offer paid sick leave to workers during the pandemic, extending the benefit to an estimated 106 million workers, according to some calculations. Parents and family members caring for sick relatives or out-of-school children could receive more than 14 weeks of paid sick and family leave.

Employers would be reimbursed as much as $1,400 per week for the costs of the leave, effectively reinstating the paid sick and family leave benefits that expired at the end of December. The benefits are to be extended to workers employed at businesses with more than 500 employees and less than 50, as well as federal workers who were excluded from the original program.

In the area of taxation, Biden proposes an expansion of tax credits for low- and middle-income families and wants to make them refundable for 2021. Child tax credit is to be expanded to $3,000 from $2,000 for each child 17 and younger, while children under the age of 6 would be eligible for $3,600.

The plan calls on Congress to create a $25 billion emergency fund and add $15 billion to an existing grant program to help child care providers to pay for rent, utilities and payroll, as well as increased costs associated with the pandemic like personal protective equipment.

The plan is also calling for $170 billion to help schools to open. Biden has said this would allow many parents, especially women, to rejoin the labor force after they dropped out to care for children learning at home.

About $130 billion would go to K-12 schools — a term used for publicly supported school grades prior to college in the US —  to help them hire additional staff to reduce class size, modify spaces and purchase resources to help meet students' academic and mental health needs.

US colleges and universities are to receive $35 billion in additional state funding.

Biden is proposing to leverage $35 billion in government funds into $175 billion in low-interest loans to finance small businesses. The plan calls for providing $15 billion to create a new grant program for small business owners, separate from the existing Paycheck Protection Program.

During the pandemic, US federal states and cities have repeatedly warned they'll be forced to make deep cuts to public health, safety and education programs due to higher costs, lower tax revenue and fewer refinancing options than the central government. But the Trump administration has rejected aid to the states, saying it would amount to a bailout for mismanaged state budgets.

Biden is now pushing Congress for $350 billion in funding assistance for state and local administrations, plus $20 billion for public transit systems to help avert layoffs and the cutting of routes.

The US Chamber of Commerce, an influential business lobby organization, has welcomed Biden's proposals. "We applaud the president-elect's focus on vaccinations and on economic sectors and families that continue to suffer as the pandemic rages on," the group said in a statement. "We must defeat COVID before we can restore our economy."

When Biden's Democrats take control of the Senate in the coming days, they will hold just 50 of the 100 seats, meaning it would take the vote of Vice President Kamala Harris to break ties in the chamber. According to the Biden team, the new US president will, however, seek a 60-vote supermajority to pass the measures. But finding 10 Republican votes will be a tall order.

What's more likely is that Biden will resort to a fast-track process, known as budget reconciliation, to get some key provisions, including the stimulus payments, jobless benefits and $15 minimum wage, through the Senate. Then, bills would be advanced in the name of "reconciling" tax and spending practices, and would need only a simple majority vote to win approval.