Joe Biden has announced a massive coronavirus relief package to kickoff his term. The proposal, the first of his "two-step plan", will build on the previous stimulus legislation passed by the US Congress in 2020. 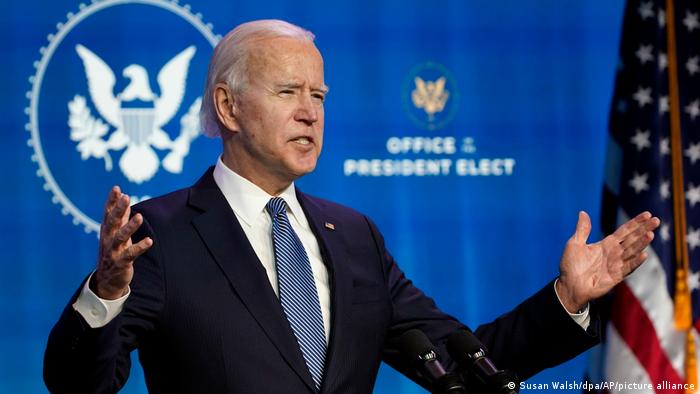 US President-elect Joe Biden announced a $1.9 trillion (€1.56 trillion) stimulus package on Thursday to revitalize a flagging economy and speed up the nation's response to the coronavirus pandemic.

Biden laid out the first of his "two-step plan of rescue and recovery" in a prime-time address.

"Tonight, I lay out my first step, the American Rescue Plan that will tackle the pandemic and get direct financial assistance and relief to Americans who need it the most," he said.

"Next month, in my first appearance before a joint session of Congress I will lay out my 'build back better' recovery plan," Biden said on Thursday. "It will make historic investments in infrastructure, manufacturing, innovation, and research and development in clean energy."

"Our 'rescue and recovery' plan is a path forward with both serious of purpose and a clear plan, with transparency and accountability, with a call for unity that is equally necessary," he said.

The president-elect also justified the huge price tag of his proposal during his speech.

"The return on these investments in jobs, racial equity will prevent long-term economic damage, and the benefits will far surpass the cost," Biden said. "In this moment of crisis... we cannot afford inaction."

The spending proposal will build on the two massive relief packages approved by Congress in 2020.

It lists a host of measures including providing financial aid to individuals, state and local government, and businesses struggling with the prolonged economic fallout.

What does the plan include?

House Speaker Nancy Pelosi and Senate Democratic leader Chuck Schumer issued a joint statement saying they would move quickly to pass legislation and get it to Biden's desk for his signature. "

"After Congress passed the most recent emergency COVID relief bill in December, Democrats were clear that much more needed to be done," the two top Democrats said.

"We are pleased the Biden-Harris package includes much of what congressional Democrats have been fighting for."

What are the challenges?

However, many Republicans in Congress balked at the price tag of the stimulus plan, which would be the third massive pandemic aid package.

While the Democratic party controls both chambers of Congress, their razor-thin majority in the Senate could be threatened if any in their party were to break ranks.

Also, the incoming administration seeks to pass the legislation even as the outgoing President Donald Trump faces an impeachment trial. Biden has encouraged lawmakers to handle the trial while also moving forward with his agenda.

More than 385,000 people have died due to COVID-19 in the US as of Thursday. Meanwhile, government numbers reported a jump in weekly unemployment claims in the first week of 2021, up to 965,000 — the highest since August.

As new variants of coronavirus prompt new public health measures, two German public health experts have told DW that vaccinations should still be effective — if they can be administered in time.

Opinion: Germany and Bavaria must not mandate COVID vaccine