US President-elect Joe Biden has called for swift approval of a coronavirus aid bill after a new jobs report highlighted a slowing labor market. The Democrat said "the future will be very bleak" if lawmakers fail to act. 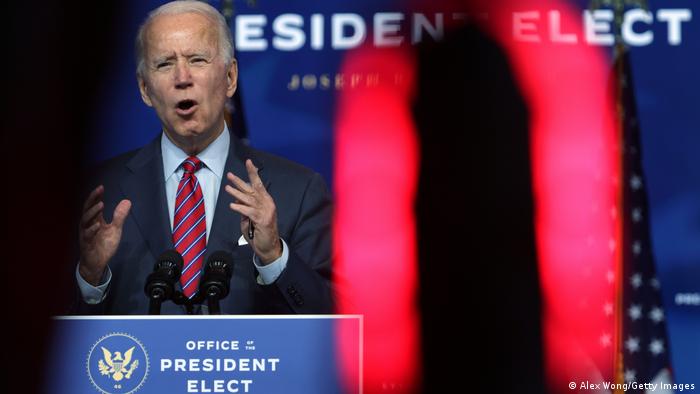 US President-elect Joe Biden on Friday warned of a "bleak" future if the Congress fails to take swift action on a coronavirus aid bill.

Biden was reacting to a national jobs report, released earlier in the day, that showed a sharp decline in US hiring amid the pandemic. The US is the worst-hit country in the world, and surging COVID-19 infections and deaths have forced states to postpone plans to reopen.

"It was grim,'' Biden said, referring to the report. "It shows an economy that's stalling."

The data from the report shows that US employers added just 245,000 new jobs in November — the fewest since April and the fifth straight monthly slowdown — while 10.7 million workers remain unemployed.

'No time to lose'

"If we don't act now, the future will be very bleak. Americans need help and they need it now. And they need more to come early next year," Biden told reporters in Delaware.

"If we act now — I mean now — we can begin to regain momentum and start to build back a better future," he said. "There's no time to lose.''

The Democrat has put his weight behind a nascent bipartisan package of around $908 billion (€750 billion) in COVID-19 spending that has drawn tentative support from members of both parties in Congress.

Biden said he would push for more relief after he enters office on January 20.

"​Any package passed in the lame-duck session is not going to be enough overall. It's critical but it's just a start. Congress is going to need to act again in January," he said.

The president-elect also criticized the Trump administration's response to vaccine distribution, saying that so far he has seen "no detailed plan" and that more work needs to be done.

Biden said his team had been talking to labor leaders, CEOs, mayors and governors in order to craft their own coronavirus aid bill, which will be his first legislative priority as president.

During a special UN summit on the coronavirus, Antonio Guterres took aim at world leaders who rejected facts about the pandemic. "When countries go in their own direction, the virus goes in every direction," he said.