Financial regulators are taking a deeper look into investment apps like Robinhood. Critics say their game-like features make them addictive and that young traders don't realize the real financial risk. 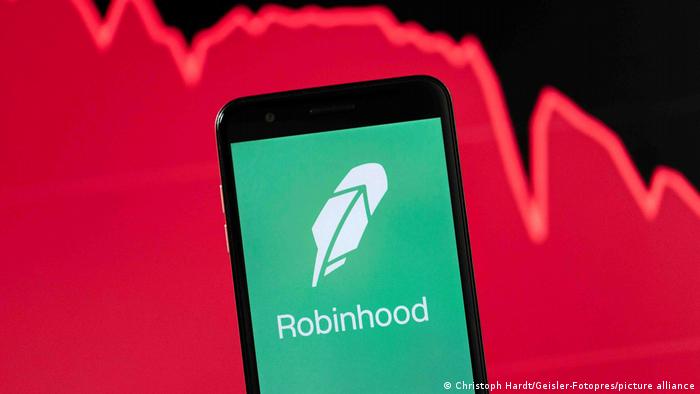 In June 2020, a 20-year-old US college student took his own life after a mobile app he had been using to invest in the stock market showed that he was $730,000 (€601,000) in the red. It later turned out that the young man merely misunderstood the balance sheet. But by then, it was too late.

Now the man's family has filed a lawsuit against the trading app Robinhood, accusing the US investment platform of causing the untimely death of their son and brother.

The news of the lawsuit comes weeks after a band of retail investors, guided by chatter on the social media platform Reddit, drove up the prices of certain short-sold stocks, rocking markets.

Some made thousands, or even hundreds of thousands of dollars from the move. This has drawn attention to the growing influence of a new type of investor — individuals who trade stocks on their phones.

But the venture also saw many lose money, and the new lawsuit is a sobering reminder that making daytrading accessible to anyone with internet access and a bit of petty cash comes with a new set of risks.

"He shouldn't have been allowed to trade these complicated options in the first place," the young man's father told CNN. "He had no training, no income, no qualifications to make those sophisticated trades."

On r/wallstreetbets, the now infamous subreddit whose users sent shares of Gamestop for a roller coaster ride, some users have voiced concern as well.

"We are having fun here, but people are losing life-changing money. Robinhood should take some responsibility in this," one user wrote, commenting on an article in which an American professor warned that young people could become addicted to online stock trading.

"Or, people could take responsibility for themselves," answered another, adding that they didn't want some "kids app."

But the question on regulators' minds is whether it already is too much like a kids app. Last year, securities regulators in the US criticized Robinhood for its supposed "gamification" of investing. These accusations have reemerged in recent weeks.

It's true that the app uses game-like graphic elements as well as social networking in a way that increases the fun factor of trading stocks. New users' first trades are celebrated with a burst of animated confetti on their screens. Investors can see what assets are most popular on the platform at the moment, and getting a friend to sign up increases their chances at buying hard-to-get stocks. The sense of community provided by online forums dedicated to trading — not to mention the proliferation of TikTok influencers, some as young as 14, offering trading advice to their millions of followers — was also a way for people to have some fun during the pandemic.

"This inexpensive stock trading that's been enabled by Robinhood is one of those things we've seen rise [on Reddit] just as video games have always been popular on Reddit," Christine Lagorio-Chafkin, author of "We Are the Nerds: The Birth and Tumultuous Life of Reddit, the Internet's Culture Laboratory," told DW.

Many are now ditching Robinhood after the app blocked people from buying some of the stocks targeted by Reddit users. But alternatives abound, and include apps that cater to users' trading experience, investment interest, or geographical location.

A new type of gambling problem

With the proliferation of video games in recent years, video game addiction has become a growing concern among parents and researchers. Some worry that gamified investing could be similarly addictive.

An addiction to stock market speculation on such an app is not all that different from a gambling addiction, according to Gerhard Meyer, addiction researcher at the University of Bremen in Germany.

"Those who are successful naturally experience a feeling of happiness," he told German business magazine Gründerszene, describing what happens when an investor watches a stock's value go up. "Suddenly, dreams seem possible, a sense of power, of euphoria is stimulated. You've earned a lot of money in a short time with your own strategy."

If the value falls, on the other hand, the investor can immediately try betting on a new product, restoring this positive feeling with the hope of the new bet.

"This is a feeling that gamblers also experience when gambling," he said.

The parallels are enough to make regulators take a second look.US Treasury Secretary Janet Yellen has said she will meet with the US Securities and Exchange Commission, the Federal Reserve and other regulatory bodies to discuss "whether recent activities are consistent with investor protection and fair and efficient markets."

The Financial Industry Regulatory Authority (FINRA), which oversees stock trading in the US, has also said that "gamification" of the markets will be one of its main focuses in 2021.

"If your firm's app platform design includes 'game-like' aspects that are intended to influence customers to engage in certain trading or other activities, how does your firm address and disclose the associated potential risks to your customers?" FINRA asked in a February report.

What do young people think?

"It is important to distinguish between accessible, modern design and gamification," a Robinhood spokesperson said in defense of the company's practices last year.

But that argument isn't likely to go far with regulators in light of the mainstream attention and steep losses brought about by the recent trading activity.

But some traders on Reddit are skeptical that all this talk of concern is really in their best interest.

"They are scared that the young generation is changing the game. There is going to be a paradigm shift and the (baby)boomers are gonna have to get out of their comfort zones," wrote a r/ wallstreetbets user.

"Yeah, how else is this generation able to survive?" responded another. "No pensions, no unions, no employer loyalty. Only chance you have to not work for the rest of your life is to invest."

"And the way climate change is going," added a third, "we really only have around maybe 20 more years of actual normal civilization to get all that money and try to have fun with it."