After US President Donald Trump's address to the UN National Assembly, there is renewed confusion over what direction the US will take in developing a coherent strategy against the regime in Pyongyang. 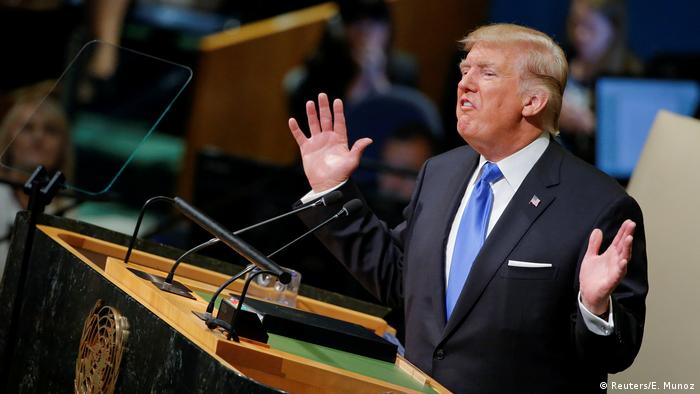 During President Trump's first address to the UN National Assembly in New York on Tuesday, the one statement that echoed loudest in the plenary chamber was the US president's full-throated threat of force toward North Korea.

This being Trump's most prominent appearance on the world stage to date, these overt threats of force, made in front of world leaders attending a conference devoted to avoiding international conflict, sounded more suited coming from a belligerent warlord than the president of the United States. But the larger issue with Trump's statements is the ambiguity they entail.

"The United States has great strength and patience but if forced to defend itself or its allies, we will have no choice but to totally destroy North Korea," said Trump.

By saying the US will act "if forced" to defend itself and allies, Trump is indicating that the US will only act if North Korea attacks first. This begs the question of how high a threat level the US and its allies would have to perceive in order spark a preemptive strike? So far, repeated missile and nuclear tests have not pushed the US into action.

And later in the speech, Trump characterized North Korea's leader Kim Jong Un as being on a "suicide mission," which indicates that he considers Kim to be entirely irrational and this could conversely be interpreted that the US intends to act first.

These inherent contradictions in Trump's public formulations on US-North Korea policy can have a destabilizing effect. At the same time they diminish the credibility of the US and its allies in threatening force against Pyongyang's dangerous military escalation.

During his campaign and first months in office, unpredictability has been the only consistent measure of Trump's foreign policy and is something the president has even lauded as being a strategic asset.

"I don't want people to know my thinking," Trump was quoted as saying during a radio interview in August 2016.

"Trump has no larger plan regarding North Korea and no nuanced view of when, how, why or how long military force is useful or effective," Katharine Moon, Chair of Korea Studies at the Brookings Institution, told DW.

"Kim has a larger plan, regime survival, maintenance of national pride, and resistance to US power. Trump changes his mind regularly; Kim does not," she added.

"If he thought he could scare us with the noise of a dog barking, well, he should be daydreaming," Ho told reporters in New York. Ho also said that he "felt sorry" for Trump's aides. 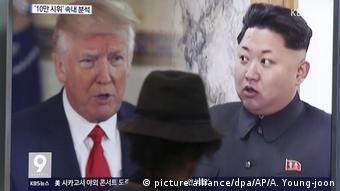 Trump has taken a more direct tone with N. Korea than previous US presidents

Trump goes on the record

After Trump's off the cuff remarks in August threatened North Korea with "fire and fury," officials in his administration scrambled to water down the implications.

This time, there has yet to be any attempt from US military and foreign policy officials to put a euphemistic spin on Trump's remarks. And unlike the spontaneous statements in August, these latest Trump threats came in a carefully written speech to the UN, which certainly lends them more "official" weight.

"The Trump administration has sent mixed messages about the possibilities for preemptive or preventive actions and North Korea's threats will echo those sentiments. The risk of miscalculation is rising significantly." Jenny Town, the managing editor of the 38 North think tank at Johns Hopkins University in Washington, told DW after Trump's remarks in August.

The US allies in the region, South Korea and Japan, responded to the UN speech with varying degrees of support for Trump's position.

"We view the speech as portraying a firm and specific stance on the key issues regarding keeping peace and safety that the international community and the United Nations are faced with," the office of South Korean President Moon Jae In said in a statement issued on Wednesday.

"It clearly showed how seriously the United States government views North Korea's nuclear program as the president spent an unusual amount of time discussing the issue."

During his speech to the UN on Wednesday, Japan's premier, Shinzo Abe echoed the US' emphasis on increasing pressure on North Korea.

"Again, and again, attempts to resolve issues through dialogue have all come to naught. In what hope of success are we now repeating the very same failure a third time?" said Abe, adding that "pressure" rather than dialogue is what's needed. 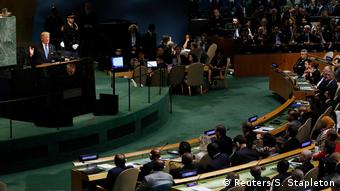 Trump speaking at the UN General Assembly in New York on September 19, 2017

Despite new posturing from both sides, the fact remains that a preemptive military strike by the US on North Korea would have catastrophic consequences for South Korea and Japan.  And the regime in Pyongyang is fully aware it would be destroyed in a direct confrontation with the US and its allies.

And despite threats of force, there are major limits for the US to acting preemptively when millions of people around Seoul are in range of conventional North Korean artillery, which is a simple, yet effective weapon.

"North Korea's artillery could inflict significant damage on Seoul," Kelsey Davenport, Director of Nonproliferation Policy at the Arms Control Association in Washington, told DW. "The country possesses a number of systems that are concentrated along the DMZ. Estimates put the number of artillery pieces at more than 11,000."

Davenport added that although the systems are aging and have a high failure rate, some could reach Seoul. Specifically, 300mm multiple launch rocket systems can fire into the center of the capital. According to the US strategy think tank Stratfor, if every one of these were fired, a single volley could "deliver more than 350 metric tons of explosives across the South Korean capital, roughly the same amount of ordnance dropped by 11 B-52 bombers."

During the Cold War with the Soviet Union, the US maintained a policy of "containment and deterrence" to address the threat of Soviet nuclear weapons. The strategy rests on limiting the effectiveness of weapons systems and providing a major disincentive for their use, also known as "mutually assured destruction."

The current problem with developing a policy of deterrence and containment is that the US has no intention to accept North Korea as a nuclear power and there is little to no dialogue between the two sides.

Up to now, the US has said that it is open to dialogue only if North Korea is willing to abandon its nuclear program, an offer North Korea rejects outright. To begin dialogue, expectations must be changed.