In their first addresses to the UN General Assembly, the French and US presidents took markedly different stances on global cooperation. Trump stressed sovereignty and protectionism; Macron urged multilateral dialogue.

US President Donald Trump said that the world is facing a "time of both immense promise and great peril" in his first address to the UN General Assembly on Tuesday.

Trump frequently praised the notion of the nation-state and told world leaders that he would always put his country first, encouraging others to do the same.

"As long as I hold this office, I will defend America's interests above all else, but in fulfilling our obligations to our nations, we also realize that it's in everyone's interests to seek the future where all nations can be sovereign, prosperous and secure," he said.

Trump switched between calling for cooperation and urging individual countries to look out for their own interests. At one point, he said some conflict-stricken countries are "going to hell."

"Major portions of the world are in conflict, some are going to hell, but the powerful people in this room can solve many of these vicious and complex problems," the US president said.

The speech marked his first attempt to lay out his US foreign policy aimed at steering Washington from nation-building abroad and downgrading global bureaucracies.

One day prior, he had urged the 193-nation organization to cut costs and reduce bureaucracy, saying that the UN had not reached its full potential due to "mismanagement."

Unless North Korea backs down from its nuclear standoff, Trump said Washington "will have no choice than to totally destroy North Korea."

"Rocket man is on a suicide mission for himself and his regime," Trump said, referring to leader Kim Jong Un.

He also denounced the Iran nuclear deal, in a possible sign that he wants to pull the US out from the international agreement.

"Frankly, that deal is an embarrassment to the United States, and I don't think you've heard the last of it," Trump said. "Believe me. It is time for the entire world to join us in demanding that Iran's government end its pursuit of death and destruction."

Turning to Venezuela, Trump had harsh words for President Nicolas Maduro, saying the US was prepared to take action if the Venezuelan government "persists in imposing authoritarian rule." 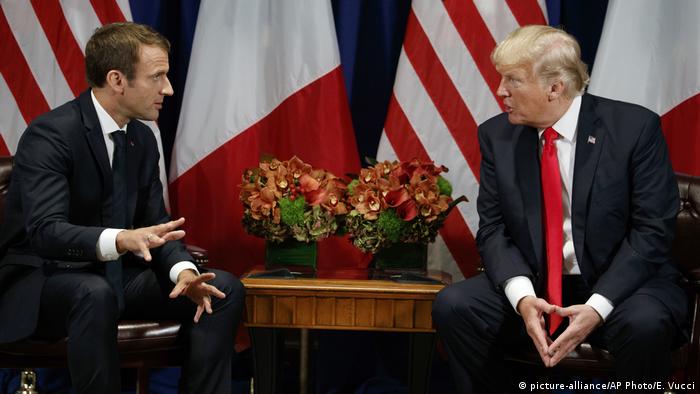 Macron: 'We must preserve progress'

French President Emmanuel Macron's maiden speech at the UN served as a foil to Trump's remarks.

With regards to the North Korea crisis, Macron said "France rejects escalation and will not close any door to dialogue." The French president also staunchly backed the Iran nuclear deal.

"Renouncing it would be a grave error, not respecting it would be irresponsible, because it is a good accord that is essential to peace at a time where the risk of an infernal conflagration cannot be excluded."

He also defended the Paris Agreement on combatting climate change, saying that the "the door will always be open" for the US to return, but that the deal is "not up for negotiation."

"We must preserve progress," Macron said. "Our vision is universal and not regional. We must uphold multilateralism for sustainable peace in the future." 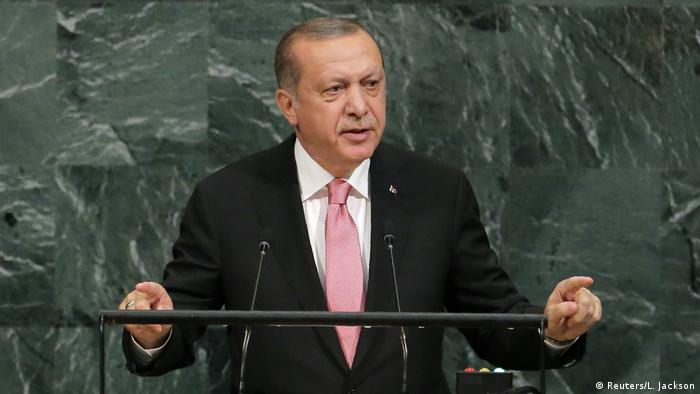 Turkish President Recep Tayyip Erdogan took to the podium in the afternoon on Tuesday to criticize the international community's response to the violence against minority Muslims in Myanmar's Rakhine state.

"Unless the tragedy taking place in Myanmar is brought to a halt, humanity will have to live with the shame of another dark stain in its history," Erdogan said, saying world leaders had already failed once in Syria.

The Turkish leader also called out the European Union in his speech for what he described as inadequate financial help for refugees.

"I want to underline that we have not received enough support from the international community, and particularly from the European Union," he said, saying that his country has spent billions of euros hosting millions of refugees from Syria and Iraq. 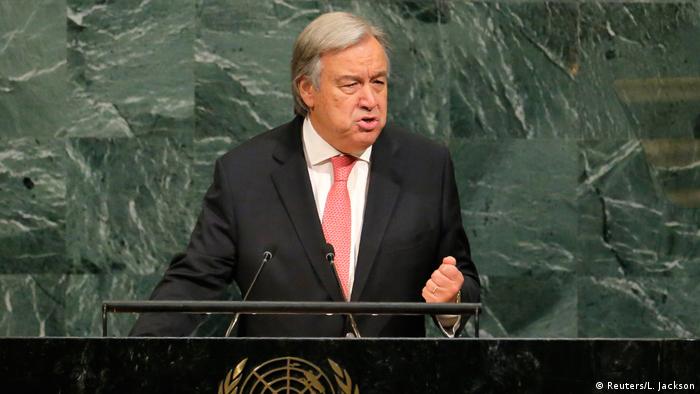 UN Secretary General Antonio Guterres cautioned: 'We must not sleepwalk our way into war'

UN Secretary-General Antonio Guterres used his first speech at the General Assembly to urge for diplomacy to avoid war with North Korea. He warned that "fiery talk can lead to fatal misunderstandings" in a swipe at both Trump and North Korean leader Kim Jong Un.

"This is the time for statesmanship," said the former prime minister of Portugal. "We must not sleepwalk our way into war."

Trump previously warned of "fire and fury" if Pyongyang does not back down from its threats.

Guterres also criticized world leaders for stoking resentment and fear of refugees for political gain as well as urged for more to be done to combat climate change.

"It is high time to get off the path of suicidal emissions. We know enough today to act. The science is unassailable," the UN chief said.