Opinion: Donald Trump - the man who sometimes shoots from the hip

Even after 100 days in office, Trump remains a mystery. Are his foreign policy decisions being made according to a strategy, or are they spontaneous ideas? We have to be prepared for more surprises, writes Miodrag Soric. 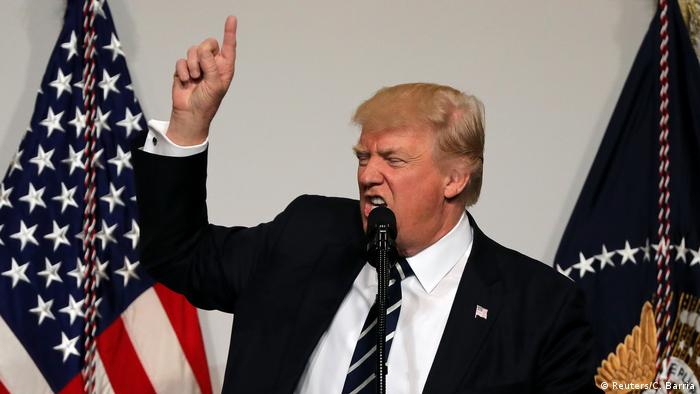 Compared to people's misgivings, things have not been so bad. President Trump has not started a war yet. The man with the edgy little hand hovering over his Twitter account has stopped criticizing, and has even praised, NATO. So, you see, nothing is ever as bad as it looks. And certainly not in regard to foreign affairs.

He has not yet been able to implement any of his election promises: there has been no improvement in the relationship to Russia, China has not been "punished" for its alleged currency manipulation, the nuclear agreement with Iran has not been terminated. The bombardment of a Syrian airport was a kind of punitive action against the Assad regime because it used chemical weapons. So was the bombing of the hideout belonging to fighters of the so-called "Islamic State" in Afghanistan.

The only thing is that there is no strategy as to how these regions can be pacified behind such decisions. In fact, the new administration appears to have no foreign policy strategy at all. Trump campaigned using the slogan "America First." What this actually means is less money for the rest of the world. Accordingly, he is reducing the budgets for international organizations, such as the United Nations and the World Bank. This could have a dramatic effect on conflict prevention, the fight against poverty or dealing with pandemics.

Trump only wants to give more money to defense. The gun lobby will be just as pleased as the "interventionists" in Congress. But weapons alone are not going to stop Islamists. And fighter jets and tanks are of little help in the fight against poverty in North Africa or in the Middle East. The United States already have by far the strongest military in the world. They are not going to be seriously threatened by anyone. It would be far better to invest this money in education or environmental protection. But Trump is unfortunately not interested in this.

Unpredictability is no political virtue

Is there a constant in Trump's foreign policy? Is it perhaps the "flexibility" that he is so proud of? This would feed the suspicion that he decides at will - spontaneously, without a plan. To be unpredictable may be a trick of the trade of building contractors, to push down the price of liquid concrete. In foreign policy, however, predictability is considered a virtue.

Optimists in Washington are hopeful that "the Donald" will eventually learn the virtue of consistency, and that he will listen more to advisors who follow traditional American foreign policy. Trump, who before his inauguration wanted to do everything differently in foreign policy, is now toeing the line - apart from a few lapses. But the world may have to live with those.

Donald Trump promised to swiftly check off the list of his campaign promises once he became president. What looked like a promising start for his administration quickly sunk into the mire of Washington. (26.04.2017)

100 days of US President Donald Trump: What you need to know