Last week, the US and Taliban negotiators told DW in Doha that a draft agreement had almost been agreed upon. So President Trump's decision to call off peace talks with the Taliban came as a surprise for many. 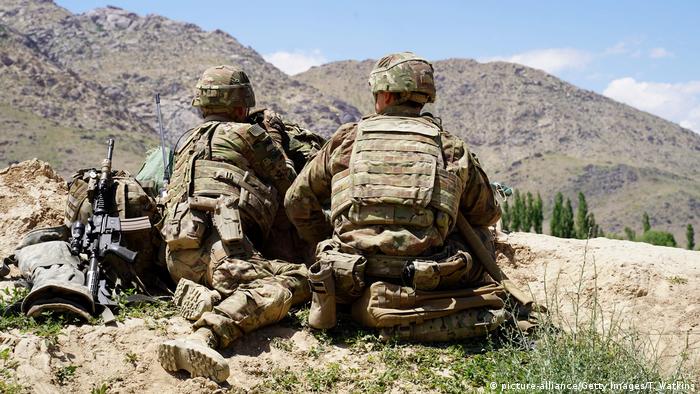 Expressing his frustration over Taliban's behavior, US President Donald Trump on Saturday called off peace talks with the insurgent group.

Trump's announcement came after the Taliban admitted to a Thursday car bombing at a security post near NATO's Resolute Support Mission headquarters in Kabul. Two NATO soldiers — one US and one Romanian — were among 12 people that were killed in the attack.

"What kind of people would kill so many in order to seemingly strengthen their bargaining position?" Trump said in a tweet.

"If they cannot agree to a ceasefire during these very important peace talks, and would even kill 12 innocent people, then they probably don't have the power to negotiate a meaningful agreement anyway," he continued.

Read more: US emphasizes the need for a 'good deal' with Taliban

The Taliban has intensified attacks in Afghanistan in the past few weeks. Last week, the group launched an offensive in Kunduz and Baghlan provinces to capture key cities.

Just as Trump's decision to call off talks was unexpected, the Taliban's muscle-flexing also caught many by surprise, particularly because the group was holding peace negotiations with the US in Doha, and was reportedly close to signing a deal to end the 18-year-long conflict in Afghanistan.

Like Trump, the Afghan government blames the Taliban for the deadlock.

"The current obstacle created in the ongoing peace process is due to Taliban's continued violence and fighting," the Afghan presidential palace said in a statement on Sunday in response to Trump's suspension of peace talks.

Some Afghan security analysts believe the Taliban chose to intensify attacks in Afghanistan to influence negotiations with the US.

"Applying pressure — militarily and politically — is a common practice during peace negotiations," Milad Sekandari, a Kabul-based peace activist, told DW. "By attacking Kunduz, the Taliban want to show their strength on the battlefield, in order to secure gains at the negotiation table.

The Taliban, however, have rejected the assertion, saying that unless all parties agree to a ceasefire the group is not under any obligation to stop attacks. They also pointed out that Afghan government troops are targeting their fighters.

Is Trump's withdrawal from talks — and the cancellation of a secret meeting with Taliban and Afghan representatives in the US — a message to both the insurgents and Kabul that Washington wants them to show flexibility to reach a deal? Is Trump also flexing his muscles?

"I think it is a tactical move by Trump to force the Taliban leadership to reduce violence and announce a ceasefire," Tamim Asi, the former deputy defense minister of Afghanistan, told DW.

Ali K. Chishti, a Pakistani security analyst who is closely following the Doha talks , also said Trump's announcement is "only a temporary measure."

"As we know the US leader, it's most likely a message to the Taliban that violence and talks cannot go together. I believe that all parties to the conflict — the US, the Taliban, Kabul and Islamabad — want a peace deal," he added.

But all these parties want a deal on their own terms. President Ashraf Ghani's government, which recently held talks with US envoy to Afghanistan Zalmay Khalilzad in Kabul, has its own set of demands from Washington. Ghani wants to hold a presidential election on September 28, and a future political setup that does not give an upper hand to the Taliban. Afghan authorities have also publicly criticized their exclusion from the Doha talks.

Experts say the US, the Taliban and the Afghan government want to negotiate from a position of strength.

Suhail Shaheen, the Taliban spokesman in Doha, told DW last week that a deal with the US was close, and said a ceasefire in Afghanistan was also on the agenda.

"Some issues are delicate and it takes time to resolve them. But we made progress in this round [the ninth round of talks in Doha], and we hope it would be the last round," he said. But, as it now appears, it was not to be the last round.

Sami Yousafzai, a London-based Afghan journalist who has been covering the Doha talks, blames the militant group for the situation.

"The whole thing shows that the Taliban are still not politically mature to seize the opportunity. The group still thinks it can win militarily in Afghanistan," said Yousafzai.

"Most of the Taliban demands were agreed upon in the draft US-Taliban deal in Doha. Despite that, when Khalilzad went to Kabul, they carried out violent attacks," he said. "The US-Taliban deal can still be salvaged, but it will require the Taliban to show flexibility. If the Taliban agree to a nationwide ceasefire, the Americans would come back to the negotiating table."

But some analysts believe the time for a deal is now over. "The Taliban have yielded too little and too late. They appear to have an upper hand in negotiations," said Tahir Mehdi, an independent analyst based in Lahore, Pakistan. "For a deal to go through, President Trump will have to overrule all intelligence assessments that show that US objectives have not been achieved during the talks. I think he can't do that."

Taliban: Ceasefire is 'on the agenda'

In an interview with DW, Shaharzad Akbar, head of Afghanistan's Independent Human Rights Commission, said that any US-Taliban deal that undermines the basic rights of Afghan civilians should be avoided. (28.08.2019)