President Donald Trump calls off US peace talks with Taliban

Trump canceled peace negotiations after the militant group claimed responsibility for an attack in Kabul that killed 12 people, including a US soldier. The US president claimed he was to meet Taliban leaders in the US. 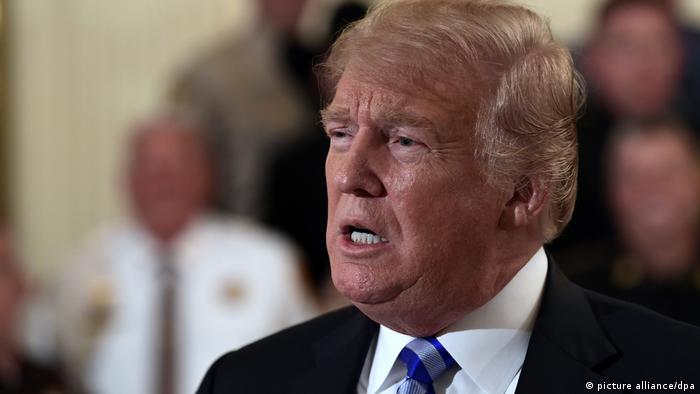 US President Donald Trump said he called off peace talks with Afghanistan's Taliban on Saturday night. In a series of tweets, he also said he had been set to meet the Afghan president as well as Taliban leaders in the United States on Sunday.

Trump tweeted that he called off the talks with the Taliban after the insurgent group admitted to an attack in Kabul that killed 12 people, including one US soldier.

"What kind of people would kill so many in order to seemingly strengthen their bargaining position?" Trump said in the tweet.

"If they cannot agree to a ceasefire during these very important peace talks, and would even kill 12 innocent people, then they probably don't have the power to negotiate a meaningful agreement anyway," he continued.

It would have been a major break with past policy regarding the Taliban had Trump met the group's leaders in the United States as the militant group's leaders have insisted on holding discussions in third countries. Had such a meeting taken place, it would have come just days before the 18th anniversary of the September 11, 2001, terror attacks in the United States that left nearly 3,000 dead. The Taliban offered shelter in Afghanistan to al-Qaeda militants before and after they conducted those terror attacks.

Read more: US emphasizes the need for a 'good deal' with Taliban

The recently concluded ninth round of US-Taliban talks in Doha, Qatar, raised hopes about an agreement between the two sides to end the 18-year war in Afghanistan.

Afghan President Ashraf Ghani's planned visit to Washington could have been a step forward in sealing the deal.

A deal with the Taliban would have ensured a safe withdrawal of thousands of US troops from the war-ravaged country in the coming months. In exchange, the militants would guarantee that the areas under their control would not be used against the US and its allies.

The Taliban have stepped up attacks in Afghanistan recently, apparently to demonstrate their strength on the battlefield. A senior US military commander said earlier on Saturday the spike in attacks was "unhelpful" to peace efforts in the region.

"It is particularly unhelpful at this moment in Afghanistan's history for the Taliban to ramp up violence," Marine General Kenneth McKenzie, head of U.S. Central Command, told reporters traveling with him.

Taliban fighters launched assaults on two cities in the north of Afghanistan, Kunduz and Pul-e Khumri over the past week as well as two suicide bombings in Kabul.

One of the Kabul blasts killed US Army Sergeant Elis A. Barreto Ortiz from Puerto Rico. The soldier's death brings the number of US troops killed in the country this year up to 16.

McKenzie also said that in order for the peace process to move forward, "all parties should be committed to an eventual political settlement" which, in turn, should result in reduced violence, he continued.

Earlier on Saturday, US Defense Secretary Mark Esper said that while Washington was seeking a political agreement with the Taliban, it would not accept any kind of deal.