Insects live in abundance in every part of world except the sea, which covers more than 70 percent of the Earth's surface. So why is it that this tenacious species has failed to colonize the marine environment?

Over a million different insect species have been identified — they can be found in the icy cold of the Antarctic, the searing heat of the Sahara Desert and almost everywhere in between.

But despite their tenacity and abundance, the one place you'll find very few insect species is near water. Of the classified insect types, only 30,000-40,000 are considered aquatic, of which just a hundred or so live in the marine environment. 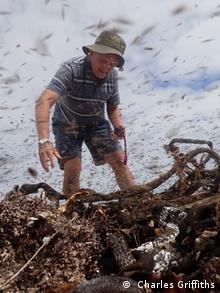 Professor Emeritus Charles Griffiths and Professor Mike Picker, together with entomologist Alan Weaving, are South Africa's most respected experts on insects and co-authors of the go-to book on the subject, Field Guide to Insects of South Africa.

They say there are many widely different theories as to why insects have not colonized the ocean.

"This is really one of the unanswered questions of science. There are very large numbers of insects living in fresh water, so the fact that it's an aquatic environment definitely doesn't prevent them from being in the ocean," said Griffiths, a marine biologist at the University of Cape Town's Department of Biological Studies.

"And they're not fazed by salinity, either. There are other reasons here."

Winging it on land

Almost all marine insects live in the intertidal zone, spending only a part of their lives underwater, notably in the egg, larval and pupae stages. Picker, an entomologist at the same university, believes the fact that adult insects generally have wings might be a reason why they don't survive in the ocean.

"There's no problem with a larval insect living in the sea, and that's the stage in which they are normally covered by water along the shoreline. But it's much more difficult for an adult winged insect to make a living out in the middle of the ocean, let alone underwater, because its body is really very specialized," he said.

Far out to sea, these adult insects would have trouble finding mates and food to eat — not to mention the many other logistical problems that would crop up during the insect's life cycle.

Other theories as to why they do not live in the ocean include that it is because there are no flowering plants or trees, because they evolved on land and rely on oxygen so cannot stay long underwater, or that their respiratory systems would collapse at the depths they would need to swim to avoid predation.

Sea skating out on the ocean

The only truly marine insects living far from the shore is the sea skater or Halobates. But even they do not live in the water.

"The sea skater lives on the surface, pretty much like they do on freshwater lakes. They scoot around, feeding on trapped insects and dead organisms. And they lay their eggs on floating debris," says Picker.

The insect skates on top of the water thanks to tiny water-repellent hairs on their feet and legs and also have a trapped layer of air around their bodies that make them buoyant.

Most marine insects are herbivorous, living on seaweed. But a few do eat carcasses that wash up on the shore. And they themselves are food for birds and other marine animals.

Population control by a little wasp

One insect that has made its home by the sea is the intertidal parasitoid wasp. Simon van Noort, curator of entomology at the Iziko Museum of South Africa, says the tiny wasp lays its eggs inside those of a spider that lives in the intertidal zone. 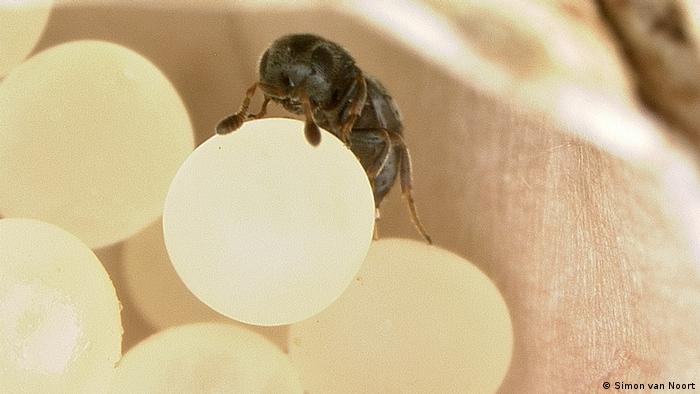 "The wasp larvae consume the contents of the spider egg and then pupate inside the sack, after which they chew their way out and emerge as an adult. The male and female wasps mate and then the female goes off to find a new spider egg sack to lay her eggs in," says van Noort.

The parisitoid wasp, like most marine insects, plays a crucial role in maintaining the balance in the local ecosystem. By keeping the spider population under control, it effectively guarantees the survival of a little crustacean that is one of many species that help breakdown seaweed along the shore, releasing nutrients back into the sea.

Delicate balance of the ecosystem

Griffiths says beetles, midges and kelp flies also have short but meaningful lives in terms of their contribution to the local ecosystem. The maggots of seaweed flies are also important in decomposing seaweeds.

"There can be tens of thousands of them on each meter of shoreline. If you turn over a piece of soggy wet kelp that's washed up on the beach, it's writhing with maggots. And they are very effective in removing that material. The decomposed seaweed washes back into the ocean and refertilizes the kelp beds. There's a kind of circulation system."

So, like their terrestrial counterparts, marine insects are important, not only as 'machinery' to break down organic matter, but also as a food source for birds and other animals. As a result, these little insects take part in maintaining coastal ecosystems which in turn have a significant impact on the economic development and well-being of humans.

Why are there so few marine insects?