Two separate studies highlight a dramatic trend in Germany: the number of flying insects has declined by 76 percent over the past 27 years. There are 15 percent fewer birds than just twelve years ago. A study by the German Nature and Biodiversity Conservation Union (NABU) concludes that the total number of birds in Germany has been declining dramatically in recent years.

In the past twelve years an estimated 12.7 million pairs of breeding birds have disappeared. That's roughly 15 percent of the total bird population. The study is based on data provided to the European Union by Germany's federal government in 2013.

NABU's study comes a day after another team of researchers published their own findings about the declining number of flying insects in the journal PLOS ONE.

There, the figures are even more dramatic. There are about 76 percent fewer insects than 27 years ago.

A link between insects and birds

According to the NABU report, the decline in birds affects relates mostly to non-endangered species, such as the starling, which was named "Bird of the Year 2018" by Germany's ornithologists. Other birds affected by the population decline include sparrows, goldcrests, finches, skylarks and yellowhammers. However, the population of some rare and endangered bird species, which receive special protection, has stabilized and partly increased in recent years. 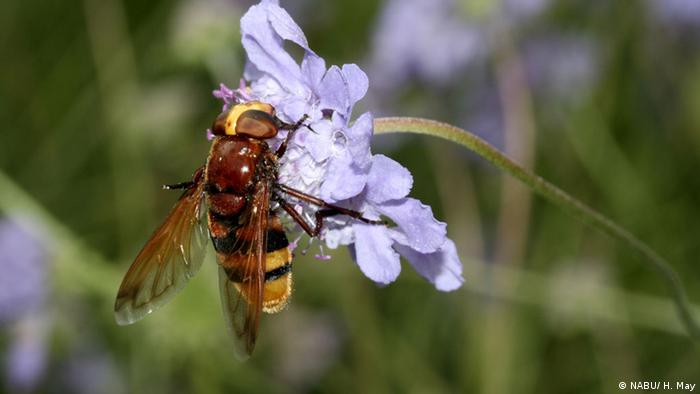 Insects, like this hornet-hoverfly, are an indicator of a healthy environment

Both studies suggest there is a close link between the decline in insects and that of birds.

The insect study is based on data from the total weight-mass of flying insects caught in special traps since 1989. Volunteer entomologists installed the traps in 63 different protected habitats in the German states of North Rhine-Westphalia, Rhineland Palatinate, and Brandenburg. They included heathland, pastures and fallow land.

Insects' extinction: No insects, no food

Each season, the traps were emptied to allow the researchers to study the amount of insects caught within a specific period of time.

They caught a total of 53.54 kilograms of insects, but the individual amounts diminished gradually. On average there was a decline of 76 percent. At the height of summer – when there tend to be the most insects around – the number even declined by 82 percent.

Caspar Hallmann from the Radboud University in Nijmegen, Netherlands, is the lead author of the insect study. He analyzed the data collected by the German entomologists. While the researchers had expected a decline, the extent of it surprised them, says Hallmann.

The study shows that the decline is not just limited to certain areas, but a broader problem, Josef Settele of the Helmholtz-Center for Environmental Research in Halle told the dpa news agency. The ecologist was not involved in the study but says it's methodologically sound. As a result, Settele says there are clear indications for a massive extinction of insects.

Speculation about the reasons

The reasons for the decline in insect and bird populations remain uncertain, however.

Climate change is a less likely explanation. Usually, warm climates are more favorable for insects and therefore also for birds. If anything, the recent increase of the average temperature by one degree Celsius (33.8 degrees Fahrenheit) should have led to an increase of populations. 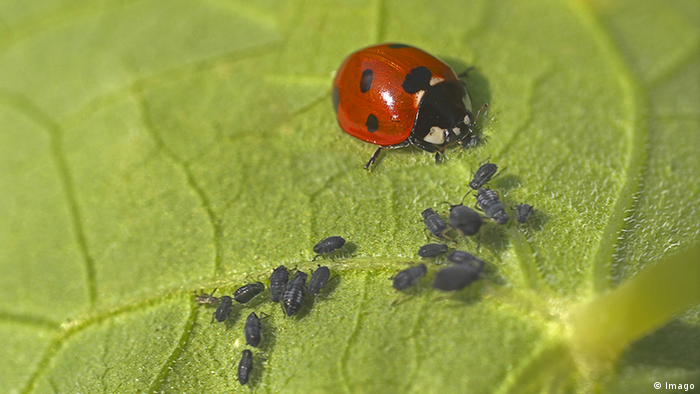 Ladybugs offer good protection against aphids – better than some pesticides

But it may have something to do with modern large scale agriculture. Several factors could play a role here. For instance, it could be linked to pesticides – especially insecticides – that farmers use, or fertilizers that change the biology of the soil and plants. It could also be related to farmers constantly working the same fields without allowing them to lie fallow, or the fact that unused areas, such as brush and hedges along roads and paths, are diminishing.

Agrarian ecologist Teja Tscharntke of the Georg August University in Göttingen warns that the decline of insects even in protected areas suggests they are loosing their function as a healthy breeding ground for new generations of insects. Once they leave the protected habitat, they are lost and unable to breed.

The German Farmers' Association, however, draws quite different conclusions.

"Considering that the insect count was done exclusively in protected habitats, this shows that it would be premature to quickly point at agriculture," says the association's secretary general, Bernhard Krüsken. "The new study explicitly mentions that more research is needed into the gravity and the origins of this insect decline."

There is one thing on which everybody agrees: if the situation is bad for insects, birds and other animals will suffer, even reptiles. And it's no good for agriculture either, which is dependent on insects to pollinate plants.

Habitat loss and a decline in insects are among the main factors influencing an alarming decrease in birds in Germany and Europe, according to new figures released by the German government. (04.05.2017)

The Anuga food fair showcases some of the world's finest delicacies. Yet amid the gluttony, it also presents a ecologically conscientious menu with sustainable meat alternatives. But can the public stomach it? (09.10.2017)

Insects - Are They the Best Pesticides?

For years chemical pesticides were considered an efficient way of protecting agriculture. But in the long term they don’t just harm would-be enemies, they also harm people and the environment. (17.08.2017)