The Anuga food fair showcases some of the world's finest delicacies. Yet amid the gluttony, it also presents a ecologically conscientious menu with sustainable meat alternatives. But can the public stomach it?

For foodies, wine connoisseurs and anyone who enjoys a glass of fine brandy, Cologne's Anuga food fair might just be the closest thing to experiencing heaven on earth.

From the 7th through the 11th of October, some 7,500 food and beverage companies from across the world pack into the Koelnmesse expo center to showcase their finest products to supermarket chains, restaurants owners and hungry consumers.

It's easy to get carried away in this marriage of business and gluttony. Even men in custom-tailored suits scamper among the bustling crowds to sample some of the Japanese pork and cabbage dumplings or freshly baked Danish pastries. No one wants to be at the back of the horde.

However, this year's organizers have not shied away from putting the environmental impact that comes with our love for fine foods on the front burner.

Farm animals, after all, consume eight percent of the world's water supply and produce 15 percent of all unnatural greenhouse gas emissions. Given the global rising demand of dairy and meat products, it's clear that the levels of water, land and energy use that go into meat production, not to mention its transportation and refrigeration, are becoming increasingly unsustainable. 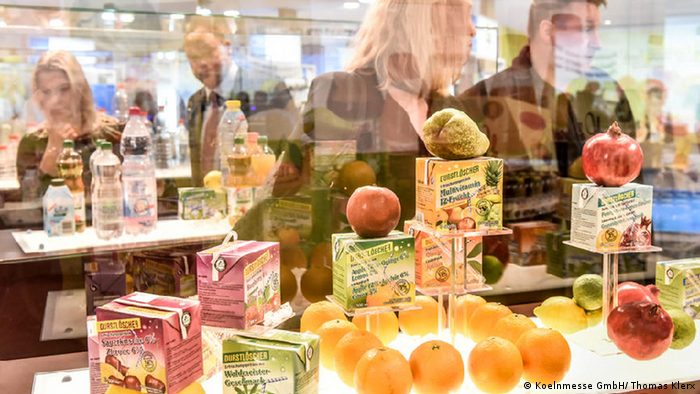 Hats off to the food innovators

Between the bites of buttery Spanish jam and juicy South American steaks, Anuga also placed a significant emphasis on the industry players aiming to tackle these environmental and supply challenges. The fair's innovation showcase presented some 67 products and concepts, many of which offered alternatives to animal rearing — from vegan "tuna" to crickets dipped in snack sauce.

The Pop Bugs snack may look like small meatballs, but they are actually made out of crickets. The snack was singled out by a panel of judges as among the most innovative new products on display, both for its ingredients and its taste. However, getting these creepy crawlies into the average western consumer's kitchens will still be a hard sell in the coming years.

"From the consumer side in Europe, there's this feeling of disgust that's connected with how we're socialized, whereas in Asia and Africa it's part of the daily diet,” said Ralph Langholz, product manager for insects at Micarna, a Swiss-based meat, poultry and seafood producer whose Pop Bugs marks its first foray into insect-based products.

"We definitely have to convince consumers in Europe, and the best way to do so is to give consumers a choice and a good, well-processed product,” Langholz said. "It's not a good idea to come into the market selling whole insects. Instead, it's better to lead the consumer slowly towards entomophagy by providing a tasty product,” he argued, using the term for the consumption of insects as food.

While Langholz admits that there's clearly still an "Eww” factor to overcome, he maintains that the overall response to the product has been "99 percent positive.” 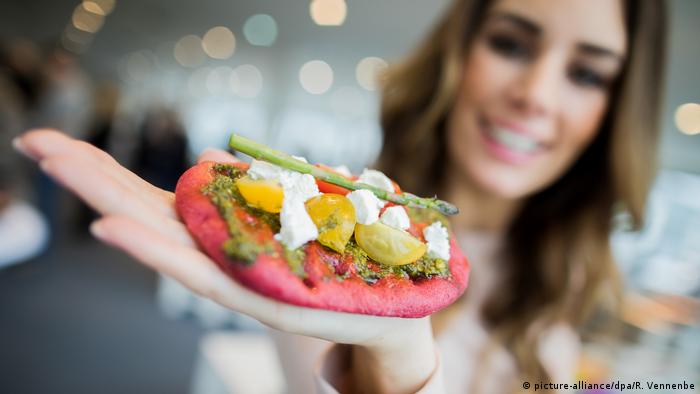 The Cologne food trade fair Anuga featured fine foods made of unusual ingredients. This red flat bread gets its color from beets!

'Flexitarianism' as a way forward?

While producers of such meat-substitutes still see themselves as targeting a niche market, they think their products can enter mainstream consciousness in the coming years, similar to how organic food has increasingly become part of dietary staples in the past two decades after its own start in the specialty category.

Food producers are trying to recreate the taste of meat by using traditional protein-rich vegetables and an assortment of spices. For example, Rob Banken, the director of Banken Champignons in the Netherlands, unveiled a burger made almost entirely out of mushrooms that he claims comes pretty close.

Banken maintains that his product is more than just a veggie burger and that its aimed at a group that has become widely know as "flexitarians.” 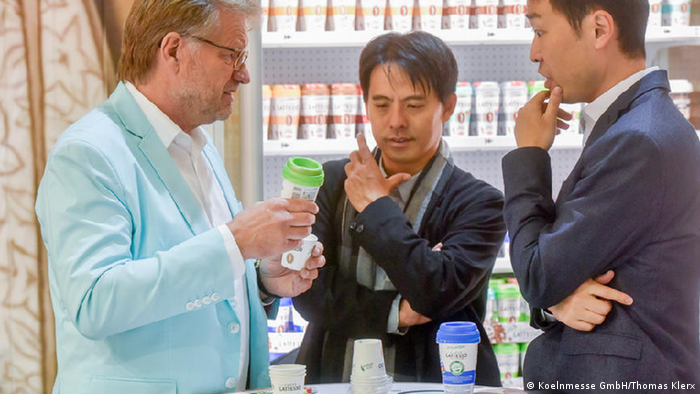 Anuga's trade fair in Colonge is the showcase event when it comes to tasting new products from around the world.

"We're seeing more and more flexitarians, people who have consciously reduced the amount they eat,” Banken said. "While our product is, of course, also for vegetarians, we see at as providing all consumers with an alternative source of all the good things meats provides."

The flexitarianism has come into its own in recent years, with almost 23 million Americans identifying as flexitarian, according to Harris Interactive, a US statstics and research firm. European countries have been slower to cut down, with consumption staying fairly stable in the past 10 years.

But the Anuga trade fair showed that there is a genuine interest in substitutes for meat, provided that they manage to keep a wholesome taste. Food scientists have overcome that crucial first hurdle. For the marketers and distributers, the challenge of getting these products out of laborartories and food fairs and onto the dining table is just beginning.

Anuga, the world's largest food fair, kicked off this weekend in Cologne. Exhibitors are trying to tickle the taste buds of tomorrow, with many using protein-based products — as well as some rather unusual ingredients. (07.10.2017)