What is the EU's stand on the Kashmir conflict?

Does the European Union favor an independent Kashmir? Has the bloc done enough to stop human rights violations in the Himalayan region, especially after New Delhi abrogated its special status? DW analyzes. 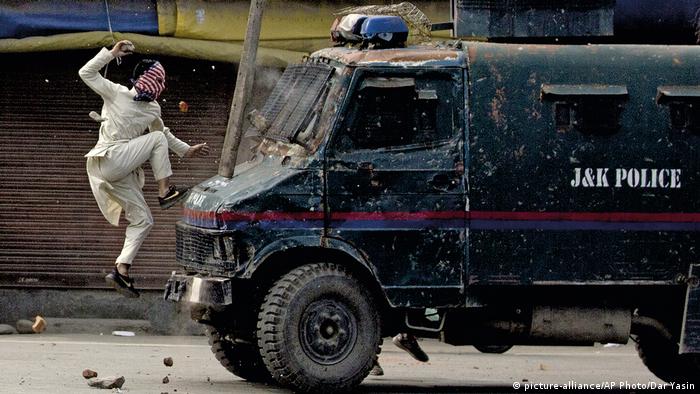 The Himalayan region has been a flashpoint for three decades

India recently invited an international group of 24 envoys to Jammu and Kashmir as part of efforts to showcase "normalcy" more than a year after the region was stripped of its special semiautonomous status.

Armed guards and officials from the Foreign Ministry accompanied diplomats from Europe, Africa, and Central and South Asian nations this week on a tour of Srinagar, Kashmir's largest city.

The envoys were then escorted to the western town of Magam, where they met several officials, including recently elected local body representatives.

"A curated tour of foreign dignitaries to showcase normalcy in the valley to the outside world is misleading," Mirwaiz Umar Farooq, a Kashmir separatist leader, told media.

Pramit Pal Chaudhuri, head of strategic affairs at the Ananta Aspen Center think tank, said India simply "wants to show the envoys the progress made in the region."

"It is now up to the envoys to independently assess the situation," he told DW.

Muslim-majority Kashmir has been divided between India and Pakistan since they became independent countries in 1947. Both countries claim the region in its entirety. Insurgents in Kashmir have been fighting Indian rule since 1989. Some estimates suggest more than 70,000 people have been killed in the armed conflict.

Prior to the 2019 amendment, Indian-controlled Kashmir enjoyed semiautonomous status that gave locals special rights in land ownership and employment.

In August 2019, Prime Minister Narendra Modi's government enforced a harsh lockdown in the region, imposing monthlong restrictions on movement and suspending internet and telephone services. Additional troops were deployed, and all major Kashmiri politicians were placed under house arrest. Thousands of civil society members and activists were detained.

Though internet services have been restored, outside access to the region remains limited. Foreign journalists are not allowed in except ones approved by the government with a guided visit.

What is the EU's stance on Kashmir?

Reports of torture, disappearances and human rights violations in Kashmir have raised concerns across the European Union.

In the months that ensued after the territory was stripped of its status in 2019, the bloc urged India and Pakistan to resolve the conflict through dialogue and come to a peaceful bilateral resolution.

The European Union emphasized a solution that respects the interests of the Kashmiri population on both sides of the India-Pakistan border, also called the Line of Control.

Analyst Chaudhuri said that, though the European Union has shown solidarity with Kashmiris regarding human rights, it regards India-administered Kashmir as "India's sovereign matter" and has failed to make the armed conflict a priority in recent years.

The European Union's statement at the UN Human Rights Council in September 2019 did not mention Kashmir on its list of pressing human rights situations.

"There is little that would signal an actual policy shift," she told DW, adding that the EU has a "legal obligation" to slap sanctions on India.

Shabir also criticized the EU for failing to address "the larger question of the military occupation of Kashmir and the aftermath of the abrogation of the region's special status" in its 2019 parliamentary debates.

"Kashmir is inaccurately and exclusively viewed from a so-called national security lens This perspective will not help advance the security situation in the Indian subcontinent," Shabir said, adding that EU-India relations seem to have remained "unaffected" despite the ongoing conflict in Kashmir.

What is Germany's take?

Following a visit to India in November 2019, German Chancellor Angela Merkel told journalists that the situation in Kashmir was "not good and not sustainable." She, however, focused on matters concerning bilateral cooperation in her official statements.

In late October 2019, members of the the European Parliament from largely far-right parties visited Indian-administered Kashmir. Among them were two MEPs from the Alternative for Germany (AfD) party and six members from Marine Le Pen's National Rally in France.

The delegates, known for their anti-Muslim rhetoric, triggered outrage from opposition parties and civil society groups throughout India.

Chaudhuri thinks the move was a "public relations stunt" by the Indian government.

"It was completely unnecessary. This need for recognition showed insecurity. Modi's government needs to restart the democratic process in Kashmir so that there is no need for a PR stunt like that," he said.