Resentment across Kashmir as New Delhi clears land for sale | Asia | An in-depth look at news from across the continent | DW | 03.11.2020

Resentment across Kashmir as New Delhi clears land for sale

Residents in India-administered Kashmir are expressing fear over a set of laws modified by the Indian government that allows local land to be sold to people from outside the state. 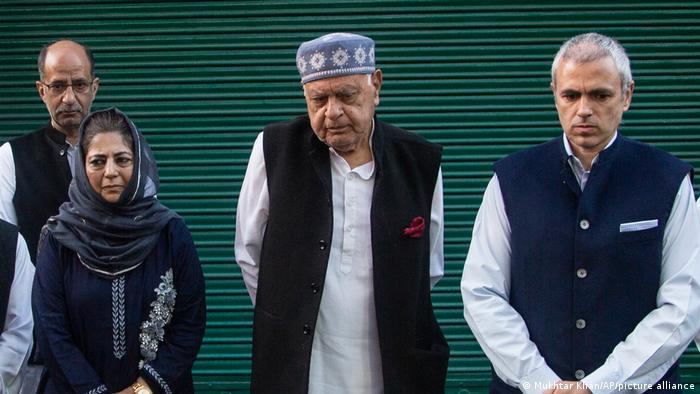 Last week, the Indian government repealed several laws that were intended to prevent non-residents from purchasing land in Kashmir, a disputed Himalayan region claimed both by India and Pakistan. The new rules allow any Indian citizen to buy land in the area whereas earlier, only permanent residents under Article 370 of the Indian Constitution were permitted to do so.

The constitutional law accorded special status to the state of Jammu and Kashmir, allowing it a large degree of independence in its administration. New Delhi abrogated the article last year in August, revoking Kashmir's autonomy and imposing strict curbs on public movement and communications.

The new development regarding land laws has now sparked fear among the Muslim-majority population of Kashmir, who believe that the changes will lead to 'outsiders' from the region permanently settling in the area and changing its demography.

The changed legislation also empowers Indian forces to designate "strategic areas"  in the region for the "direct operational and training requirements of armed forces," according to a statement by the government. This has further created fear among the local population.

Protests began on Saturday soon after the announcement, when shops and businesses as wll as public transport stayed shut.

'Against Kashmiris and Muslims'

Muhammad Sultan, 70, a resident of Kawdara locality in the main city of Srinagar, said that the new land laws aimed “to change the Muslim-character of the region and oppress majority voices."

"They are against Kashmiris and Muslims," he told DW at his shop in Srinagar city where he sells copper utensils. "They do everything that hurt and harm us. They force our children to pick up guns. We are mourning our loss and cannot do anything else," he said, adding that Kashmir has been robbed of its resources for decades and that the new laws would mean "we lose our homes and identity too."

Tawheeda Nazir, a 28-year-old school teacher from southern Kashmir, was afraid that locals would lose all their rights with the new rules. "Our jobs, our education and our opportunities will be taken away by outsiders who will be more like settlers," she said. "We have no security now. This will not create any development here but will further marginalize the local Muslim population who have given thousands of sacrifices in this brutal war," she added. 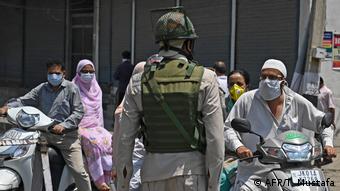 Paramilitary troopers are a normal sight in the capital, Srinagar

Even local Hindus or Kashmiri pandits, thousands of whom were forced to leave their homes in early 1990 when armed insurgency erupted in the region, are disillusioned with the new rules.

Satish Mahaldar, chairman of Reconciliation, Return and Rehabilitation of Migrants, a New Delhi-based group working for the rights of the minority Kashmiri pandits, told the media that his community felt betrayed. "For 31 years, we have been waiting to return and resettle in our land of origin. But the government of India has thrown open the Kashmir land for sale without first helping us to resettle. Is this justice?" he asked.

"If earlier governments did nothing to help us to get our land back in Kashmir, this government has made sure that we remain in exile forever," he complained. His group has demanded an immediate ban on the sale of any kind of land until local communities are rehabilitated.

Pro-Indian political parties in Kashmir, which have been the backbone of New Delhi's political outreach so far, have also expressed shock and resentment over the changes in the land laws and said that "they will fight to get their rights back."

Omar Abdullah, whose party National Conference has ruled most of the last seven decades in Kashmir said, "J&K has been put up for sale and left bereft of any basic protections." He also said that the amendments added to people's fear. "They want to alter the character of this place," he told the media.

The People’s Alliance for Gupkar Declaration (PAGD), a newly formed conglomeration of pro-Indian parties in Jammu and Kashmir, also termed the new land laws as a "huge betrayal."

"This is a massive assault on the rights of the people of Jammu and Kashmir and Ladakh and grossly unconstitutional," spokesman of the PAGD and head of the political party Jammu and Kashmir People's Conference Sajad Lone told Indian media.

However, the Bharatiya Janata Party government in New Delhi as well as the region's top administrative official have defended the changes and said it will bring progress and prosperity. "I want to say this forcefully and with full responsibility that agricultural land has been kept reserved for farmers; no outsider will come on those lands," Lieutenant Governor Manoj Sinha said. He emphasized that the government wanted to attract more investors into Kashmir.

Zaffar Choudhary, a political analyst based in Jammu, told DW that the  "the extension of laws opening up Jammu and Kashmir’s lands for purchase to citizens of India was a natural outcome of the August 5 events." Last year, New Delhi abrogated Article 370 of the Indian constitution, which accorded autonomous status to the state of Jammu and Kashmir. The order was followed by severe restrictions on public movement and communications in the area.

“The laws extended under Jammu and Kashmir Reorganisation Act are, therefore, no surprise," Choudhary argued. "The surprise, however, is the deviation from the public commitment made by the Home Minister [Amit Shah] in March this year. He had held out categorical assurance against any change in demography of Jammu and Kashmir."

"This decision, contrary to assurances, doesn’t inspire trust," he said.

Kashmir is a former kingdom nestled in the Himalayas between India and Pakistan. A Muslim-majority area, the kingdom was ruled by the Hindu Raja Hari Singh until 1947, when the Indian army marched into the capital, Srinagar and forced him to abdicate. Ever since, the area has been the core of discord between New Delhi and Islamabad, both of which stake a claim to the territory. India accuses Pakistan of fuelling separatists in the region and both countries have fought three wars over Kashmir in the last seven decades.