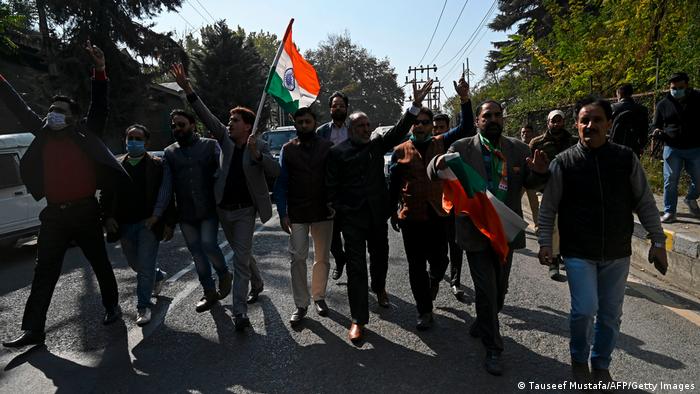 It is the latest incident targeting members of the Hindu nationalist BJP in the Muslim-majority region in recent months, following changes to the law that revoked Kashmir's decades-old autonomy.

The workers, including a local youth wing leader, were traveling in a car in southern Kashmir's Kulgam district on Thursday night when they were fired on, local police said.

The victims were taken to a hospital but were declared dead on arrival, police said.

Indian Prime Minister Narendra Modi, head of the BJP, condemned the killings: "They were bright youngsters doing excellent work in Jammu and Kashmir. My thoughts are with their families in this time of grief. May their souls rest in peace."

A search for the attackers has been launched.

Indian-administered Kashmir has seen a separatist insurgency since the 1980s in which tens of thousands of people have been killed.

The BJP last year repealed laws that gave the region greater autonomy. Authorities also changed laws allowing people from the rest of the country to buy land in the disputed region. They then detained several local political leaders to suppress dissent.

The Indian government says it is trying to better integrate Kashmir with the rest of the country and make laws uniform across states.

However, anger has grown among local Kashmiris. In July, a local president of BJP, his father and brother were killed by rebels in Bandipora. A month later, a BJP village council chief was shot dead by the militants.

The mountainous Kashmir region is ruled by India and Pakistan in parts, but both claim it in full.